Manual and mechanical methods - Methods of weed control in Aquaculture

In small farms it is often possible to remove floating weeds and uproot marginal and emergent weeds manually, with the help of simple tools like hand scythes, wire mesh, coir nets, etc.

Methods of weed control in Aquaculture

In small farms it is often possible to remove floating weeds and uproot marginal and emergent weeds manually, with the help of simple tools like hand scythes, wire mesh, coir nets, etc. Water hyacinth, arrow head (Sagittaria), waterlettuce, salvinia, duck weed, Azolla, Spirodella and Hygrorhiza are examples of floating weeds which can thus be removed from aquaculture waters. It is often difficult to eradicate the weeds completely, and the few that remain may be enough for the water body to be recolonized. Repeated removal, combined where possible with biological or chemical methods, may be required to keep their growth under control.

Several types of mechanical equipment have been devised for weed control, but since these are generally meant for large bodies of water such as lakes, most of them can be used only in very extensive pond farms. Farms with large individual ponds measuring as much as 100ha, found in Eastern European countries, use such equipment regularly. The most common device is a weed cutter, used for cutting submerged and emergent weeds (fig. 10.2). There are several models of mechanical weed cutters; many of them consist of flat-bottomed boats fitted with cutting beams or other cutting devices which can be adjusted to cut at different depths. Many of the cutting devices consist of two cutting beams: one horizontal and the other vertical. Motor-propelled boats fitted in front with a series of circular saws (one vertical and the others horizontal) have also been used. Floating weed cutters are generally driven by paddle wheels (fig. 10.3). Amphibious boats fitted with weed-cutting devices are especially convenient for use in shallow ponds and enclosures. 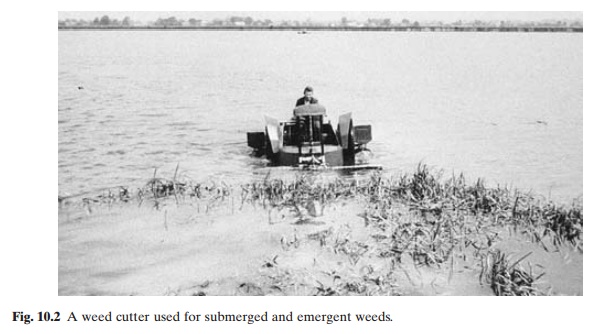 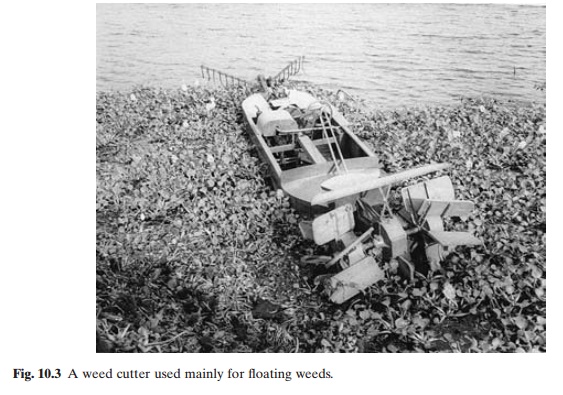 Weeds have to be cut close to the pond bottom and repeated cutting will be necessary to keep the growth under check. Even in cold climates, a minimum of two cuttings per year is recommended, but in tropical climates cutting will have to be done more often. Removal of cut weeds is equally important. Large wooden rakes (4m wide with several 30cm long teeth) mounted on light floats can be attached to a long cable or rope and operated from the pond bank (fig. 10.4). Lange (1965) described a sickle-bar cutter, used for controlling submerged weeds. The weeds are cut up to 1.5m below the water surface and conveyed to a barge for disposal. 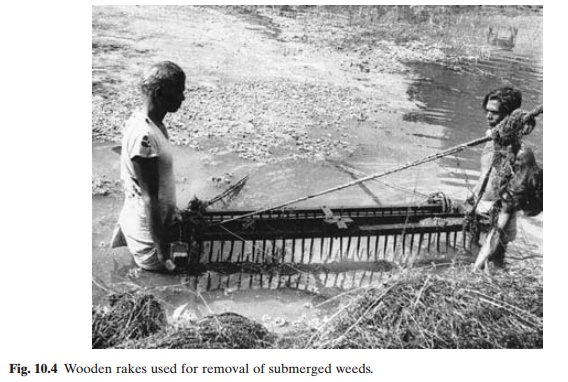 It may appear easier to remove algal growths such as of the muskgrass (Chara sp.), but in fact it is often difficult to remove the clumps completely by mechanical means. What remains is usually enough to recolonize the water body in a short period of time.