Methods of weed control in Aquaculture

Treatment with herbicide chemicals shows relatively more rapid results in weed control. However, most herbicides are also lethal to cultured animals at the levels of concentration required to kill aquatic weeds, in which case they can be used in aquaculture farms only after harvests and during renovation. Another problem is the accumulation of dead weeds after herbicide application. Unless they are removed manually or by mechanical means, the weeds will decay and create oxygen depletion in the water. Further, the nutrients released by disintegrated weeds will add to the fertility of the farm and lead to further growth of weeds. It is also likely that herbicides will affect the development of blooms of desirable phytoplankton in the farm.

Blackburn (1968) listed several herbicides which have been used in the control of algae and floating, emergent and submerged weeds. The use of inorganic fertilizers to develop a thick growth of phytoplankton that will cover 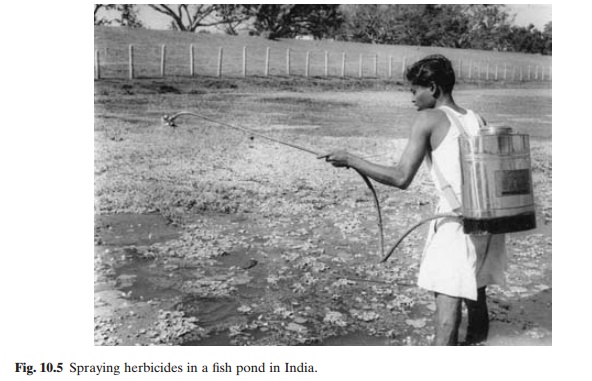 the water surface and prevent the penetration of sunlight, and consequently the establishment of weeds, has been recommended in some areas. But this method has not received wide acceptance, especially in the tropics where introduction of additional fertilizers in already fertile waters often results in more luxuriant growth of macrovegetation rather than plankton. However, shading of nursery and fry ponds with dyes, and even cowdung, has been tried to control noxious algal blooms with some success.

The herbicides used show a wide range of chemical structure and their action is either by direct contact that results in the destruction of the protoplasm or by translocation to unexposed parts of the weed. They are applied on the foliage or in the water in which the weed grows (fig. 10.5). In the case of rooted vegetation, the herbicide is applied on the soil where the roots penetrate. Some of them show selective action against particular weeds, whereas others are non-selective.

The effectiveness of herbicide treatment depends on a number of factors, including the weed growth, the time and method of treatment and the nature of the water body. It is also clear that chemical treatment has to be combined with manual or mechanical removal, as well as effective farm management, to prevent rein-festation. The economics of treatment vary considerably according to country and location. More importantly, many countries prohibit the use of some of the chemicals in aquaculture waters.

Among the herbicides, 2,4–D (2, 4-dichlorophenoxyacetate) has been widely used in controlling floating and emergent weeds by foliage application. It is commercially available as an acid, sodium salts, amine salts or as esters. The amines and esters have been widely used in the control of water hyacinth, Pistia, Myriophyllum, Inula andProsopsis, sprayed as a 1 percent aqueous solution. Being water-soluble, Diquat (6, 7 dihydrodipyrido (1, 2–a:2¢1¢–c) pyrazidiinium salt) is easy to apply in pond farms and reported to be effective against emergent, floating and submerged weeds. However, its effectiveness is greatly reduced in waters with suspended soil or organic particles, and so it can be used only in farm ponds with clear water conditions.

As mentioned earlier, the eradication of submerged weeds is comparatively more difficult and the application of weedicides in waters containing aquaculture animals would require the observance of greater safety margins. Some of the chemicals used for eradicating submerged weeds as well as filamentous algae, such as copper sulphate and simazine (2-chloro-4, 6 bis (ethylamine)-triazine) may affect the long-term productivity of food organisms by the persistence of the chemical in the water or by its accumulation at the bottom. Their non-selective toxicity may also be a drawback.

Copper sulphate (CuSO4) is the most widely used and economical weedicide, especially in the control of algal growths. A concentration of 1–3ppm copper sulphate pentahydrate (CSP) is reported to be very effective for several algae.

Anhydrous ammonia has been used to eradicate dense growths of submerged weeds such as Hydrilla and Najas, as well as floating weeds like Pistia, but the dose required to kill the weeds is lethal to fish. As ammonia acts quickly and does not leave any residual toxicity, it has been suggested that the cultured species can be saved by adopting sectional treatment.

Ammonia treatment is time-consuming and expensive, but would partly serve as a nutrient in the water. Whether such additional fertility is acceptable in the particular farm is also an important consideration in the use of ammonia as a weedicide. The recommended dose for sub-merged weeds is 12ppmN and the gas is applied from a cylinder at a maximum speed of 2.75kg/h. The weeds die within about five days.