Major depressive disorder typically involves 2 or more weeks of a sad mood or lack of interest in life activities with at least four other symptoms of depression.

Major depressive disorder typically involves 2 or more weeks of a sad mood or lack of interest in life activities with at least four other symptoms of depression such as anhedonia and changes in weight, sleep, energy, concen-tration, decision making, self-esteem, and goals. Major depression is twice as common in women and has a 1.5 to 3 times greater incidence in first-degree relatives than in the general population. Incidence of depression decreases with age in women and increases with age in men. Single and divorced people have the highest incidence. Depres-sion in prepubertal boys and girls occurs at an equal rate (Kelsoe, 2005).

Major categories of antidepressants include cyclic antide-pressants, monoamine oxidase inhibitors (MAOIs), selec-tive serotonin reuptake inhibitors (SSRIs), and atypical antidepressants. The choice of which antidepressant to use is based on the cli-ent’s symptoms, age, and physical health needs; drugs that have or have not worked in the past or that have worked for a blood relative with depression; and other medica-tions that the client is taking.

Evidence is increasing that antidepressant therapy should continue for longer than the 3 to 6 months origi-nally believed necessary. Fewer relapses occur in people with depression who receive 18 to 24 months of antide-pressant therapy. As a rule, the dosage of antidepressants should be tapered before being discontinued.

Selective Serotonin Reuptake Inhibitors. SSRIs, the newest category of antidepressants (Table 15.1), are effective for most clients. Their action is specific to serotonin reuptake inhibition; these drugs produce few sedating, anticholinergic, and cardiovascular side effects, which make them safer for use in older adults. Because of their low side effects and relative safety, people using SSRIs are more apt to be compli-ant with the treatment regimen than clients using more trou-blesome medications. Insomnia decreases in 3 to 4 days, appetite returns to a more normal state in 5 to 7 days, and energy returns in 4 to 7 days. In 7 to 10 days, mood, concen-tration, and interest in life improve. 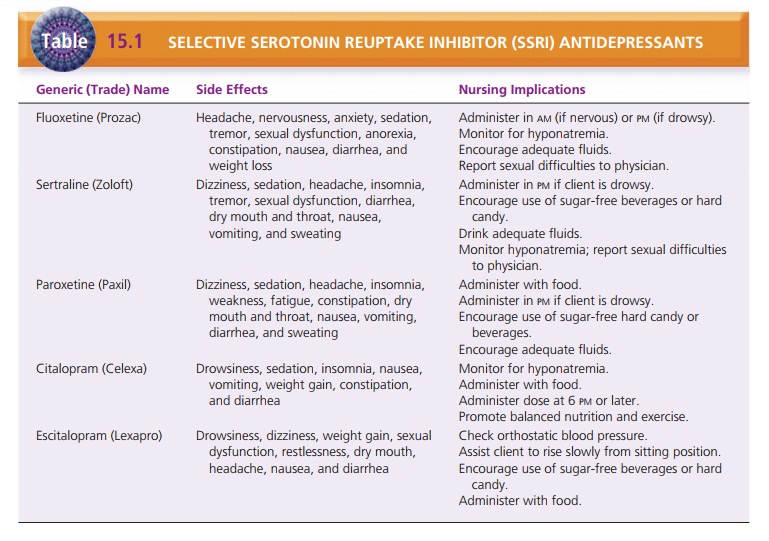 Fluoxetine (Prozac) produces a slightly higher rate of mild agitation and weight loss but less somnolence. It has a half-life of more than 7 days, which differs from the 25-hour half-life of other SSRIs.

Cyclic Antidepressants. Tricyclics, introduced for the treat-ment of depression in the mid-1950s, are the oldest antidepressants. They relieve symptoms of hopelessness, helplessness, anhedonia, inappropriate guilt, suicidal ide-ation, and daily mood variations (cranky in the morning and better in the evening). Other indications include panic disor-der, obsessive–compulsive disorder, and eating disorders. Each drug has a different degree of efficacy in blocking the activity of norepinephrine and serotonin or increasing the sensitivity of postsynaptic receptor sites. Tricyclic and hetero-cyclic antidepressants have a lag period of 10 to 14 days before reaching a serum level that begins to alter symptoms; they take 6 weeks to reach full effect. Because they have a long serum half-life, there is a lag period of 1 to 4 weeks be-fore steady plasma levels are reached and the client’s symp-toms begin to decrease. They cost less primarily because they have been around longer and generic forms are available.

Tricyclic antidepressants are contraindicated in severe impairment of liver function and in myocardial infarction (acute recovery phase). They cannot be given concurrently with MAOIs. Because of their anticholinergic side effects, tricyclic antidepressants must be used cautiously in clients who have glaucoma, benign prostatic hypertrophy, urinary retention or obstruction, diabetes mellitus, hyperthyroid-ism, cardiovascular disease, renal impairment, or respira-tory disorders (Table 15.2). 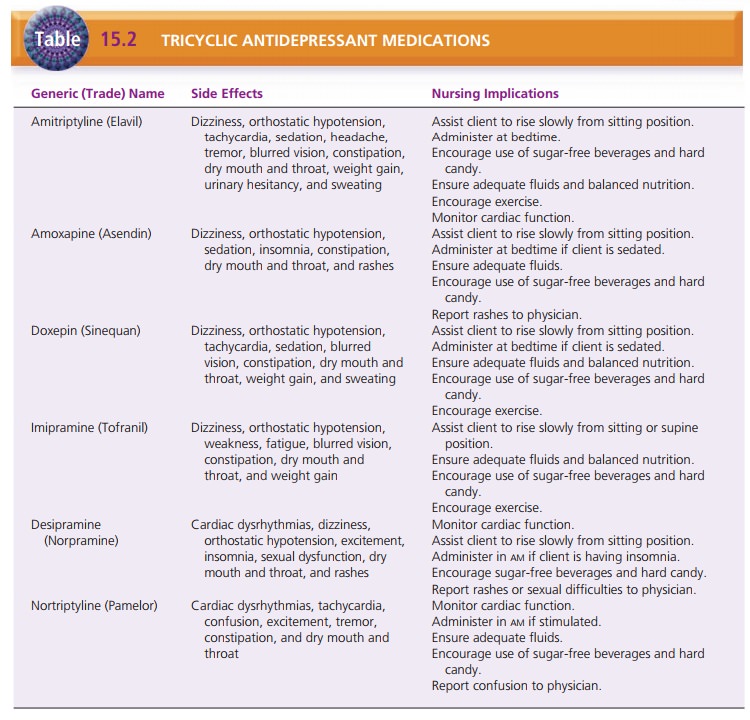 Overdosage of tricyclic antidepressants occurs over sev-eral days and results in confusion, agitation, hallucinations, hyperpyrexia, and increased reflexes. Seizures, coma, and cardiovascular toxicity can occur with ensuing tachycardia, decreased output, depressed contractility, and atrioventricular block. Because many older adults have concomitant health problems, cyclic antidepressants are used less often in the geriatric population than newer types of antidepressants that have fewer side effects and less drug interactions.

Tetracyclic Antidepressants. Amoxapine (Asendin) may cause extrapyramidal symptoms, tardive dyskinesia, and neuroleptic malignant syndrome. It can create tolerance in 1 to 3 months. It increases appetite and causes weight gain and cravings for sweets.

Maprotiline (Ludiomil) carries a risk for seizures (espe-cially in heavy drinkers), severe constipation and urinary retention, stomatitis, and other side effects; this leads to poor compliance. The drug is started and withdrawn grad-ually. Central nervous system depressants can increase the effects of this drug. 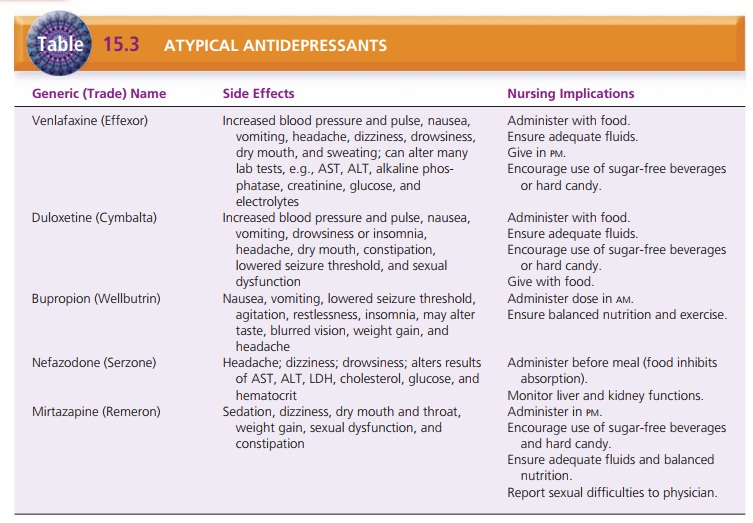 Nefazodone inhibits the reuptake of serotonin and nor-epinephrine and has few side effects. Its half-life is 4 hours, and it can be used in clients with liver and kidney disease. It increases the action of certain benzodiazepines (alprazo-lam, estazolam, and triazolam) and the H2 blocker terfen-adine. Remeron also inhibits the reuptake of serotonin and norepinephrine, and it has few sexual side effects; how-ever, its use comes with a higher incidence of weight gain, sedation, and anticholinergic side effects (Facts and Comparisons, 2009).

Monoamine Oxidase Inhibitors. MAOIs are used infre-quently because of potentially fatal side effects and interac-tions with numerous drugs, both prescription and over-the-counter preparations (Table 15.4). The most seri-ous side effect is hypertensive crisis, a life-threatening con-dition that can result when a client taking MAOIs ingests tyramine-containing foods  and flu-ids or other medications. Symptoms are occipital headache, hypertension, nausea, vomiting, chills, sweating, restless-ness, nuchal rigidity, dilated pupils, fever, and motor agita-tion. These can lead to hyperpyrexia, cerebral hemorrhage, and death. The MAOI–tyramine interaction produces symp-toms within 20 to 60 minutes after ingestion. For hypertensive crisis, transient antihypertensive agents, such as phentolamine mesylate, are given to dilate blood vessels and decrease vascu-lar resistance (Facts and Comparisons, 2009).

There is a 2- to 4-week lag period before MAOIs reach therapeutic levels. Because of the lag period, adequate washout periods of 5 to 6 weeks are recommended between the times that the MAOI is discontinued and another class of antidepressant is started.

Other Medical Treatments and Psychotherapy

Electroconvulsive Therapy. Psychiatrists may use electro-convulsive therapy (ECT) to treat depression in selectgroups, such as clients who do not respond to antidepres-sants or those who experience intolerable side effects at therapeutic doses (particularly true for older adults). In addition, pregnant women can safely have ECT with no harm to the fetus. Clients who are actively suicidal may be given ECT if there is concern for their safety while waiting weeks for the full effects of antidepressant medication.

ECT involves application of electrodes to the head of the client to deliver an electrical impulse to the brain; this causes a seizure. It is believed that the shock stimulates brain chemistry to correct the chemical imbalance of depression. Historically, clients did not receive any anes-thetic or other medication before ECT, and they had full-blown grand mal seizures that often resulted in injuries ranging from biting the tongue to breaking bones. ECT fell into disfavor for a period and was seen as “barbaric.” Today, although ECT is administered in a safe and humane way with almost no injuries, there are still critics of the treatment.

Clients usually receive a series of 6 to 15 treatments scheduled thrice a week. Generally, a minimum of six treatments are needed to see sustained improvement in depressive symptoms. Maximum benefit is achieved in 12 to 15 treatments.

Preparation of a client for ECT is similar to preparation for any outpatient minor surgical procedure: The client receives nothing by mouth (or, is NPO) after midnight, removes any fingernail polish, and voids just before the procedure. An intravenous line is started for the adminis-tration of medication.

Initially, the client receives a short-acting anesthetic so he or she is not awake during the procedure. Next, he or she receives a muscle relaxant/paralytic, usually succinylcho-line, which relaxes all muscles to reduce greatly the outwardsigns of the seizure (e.g., clonic–tonic muscle contractions). Electrodes are placed on the client’s head: one on either side (bilateral) or both on one side (unilateral). The electrical stimulation is delivered, which causes seizure activity in the brain that is monitored by an electroencephalogram, or EEG. The client receives oxygen and is assisted to breathe with an Ambu bag. He or she generally begins to waken after a few minutes. Vital signs are monitored, and the client is assessed for the return of a gag reflex.

ECT is also used for relapse prevention in depression. Clients may continue to receive treatments, such as one per month, to maintain their mood improvement. Often, clients are given antidepressant therapy after ECT to pre-vent relapse. Studies have found maintenance ECT to be effective in relapse prevention (Frederikse, Petrides, & Kellner, 2006).

Psychotherapy. A combination of psychotherapy and medications is considered the most effective treatment for depressive disorders. There is no one specific type of ther-apy that is better for the treatment of depression (Rush, 2005). The goals of combined therapy are symptom remis-sion, psychosocial restoration, prevention of relapse or recurrence, reduced secondary consequences such as marital discord or occupational difficulties, and increasing treatment compliance.

Interpersonal therapy focuses on difficulties in relation-ships, such as grief reactions, role disputes, and role tran-sitions. For example, a person who, as a child, never learned how to make and trust a friend outside the family structure has difficulty establishing friendships as an adult. Interpersonal therapy helps the person to find ways to accomplish this developmental task.

Behavior therapy seeks to increase the frequency of the client’s positively reinforcing interactions with the envi-ronment and to decrease negative interactions. It also may focus on improving social skills.

Cognitive therapy focuses on how the person thinks about the self, others, and the future and interprets his or her experiences. This model focuses on the person’s distorted thinking, which, in turn, influences feelings, behavior, and functional abilities. Table 15.5 describes the cognitive distor-tions that are the focus of cognitive therapy.

Investigational Treatments. Other treatments for depres-sion are being tested. These include transcranial magnetic stimulation (TMS), magnetic seizure therapy, deep brain stimulation, and vagal nerve stimulation. TMS is the closest to approval for clinical use. These novel brain-stimulation techniques seem to be safe, but their efficacy in relieving depression needs to be established (Eitan & Lerer, 2006).