Bipolar disorder involves extreme mood swings from episodes of mania to episodes of depression. (Bipolar disorder was for-merly known as manic-depressive illness.) During manic phases, clients are euphoric, grandiose, energetic, and sleep-less. They have poor judgment and rapid thoughts, actions, and speech. During depressed phases, mood, behavior, and thoughts are the same as in people diagnosed with major depression (see previous discussion). In fact, if a person’s first episode of bipolar illness is a depressed phase, he or she might be diagnosed with major depression; a diagnosis of bipolar disorder may not be made until the person experi-ences a manic episode. To increase awareness about bipolar disorder, health care professionals can use tools such as the Mood Disorder Questionnaire.

Bipolar disorder ranks second only to major depression as a cause of worldwide disability. The lifetime risk for bipolar disorder is at least 1.2%, with a risk of completed suicide for 15%. Young men early in the course of their illness are at highest risk for suicide, especially those with a history of suicide attempts or alcohol abuse as well as those recently discharged from the hospital (Rihmer & Angst, 2005).

Whereas a person with major depression slowly slides into depression that can last for 6 months to 2 years, the person with bipolar disorder cycles between depression and normal behavior (bipolar depressed) or mania and normal behavior (bipolar manic). A person with bipolar mixed episodes alternates between major depressive and manic episodes interspersed with periods of normal behav-ior. Each mood may last for weeks or months before the pattern begins to descend or ascend once again. Figure 15.1 shows the three categories of bipolar cycles. 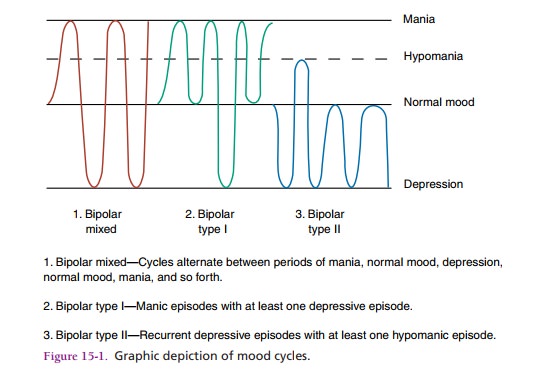 Bipolar disorder occurs almost equally among men and women. It is more common in highly educated people. Because some people with bipolar illness deny their mania, prevalence rates may actually be higher than reported.

The mean age for a first manic episode is the early 20s, but some people experience onset in adolescence, whereas oth-ers start experiencing symptoms when they are older than 50 (APA, 2000). Currently, debate exists about whether or not some children diagnosed with attention deficit hyper-activity disorder actually have a very early onset of bipolar disorder. Manic episodes typically begin suddenly, with rapid escalation of symptoms over a few days, and they last from a few weeks to several months. They tend to be briefer and to end more suddenly than depressive episodes. Ado-lescents are more likely to have psychotic manifestations.

The diagnosis of a manic episode or mania requires at least 1 week of unusual and incessantly heightened, gran-diose, or agitated mood in addition to three or more of the following symptoms: exaggerated self-esteem; sleepless-ness; pressured speech; flight of ideas; reduced ability to filter extraneous stimuli; distractibility; increased activi-ties with increased energy; and multiple, grandiose, high-risk activities involving poor judgment and severe conse-quences, such as spending sprees, sex with strangers, and impulsive investments (APA, 2000).

Clients often do not understand how their illness affects others. They may stop taking medications because they like the euphoria and feel burdened by the side effects, blood tests, and physicians’ visits needed to maintain treatment. Family members are concerned and exhausted by their loved ones’ behaviors; they often stay up late at night for fear the manic person may do something impulsive and dangerous.

Treatment for bipolar disorder involves a lifetime regimen of medications: either an antimanic agent called lithium or anticonvulsant medications used as mood stabilizers . This is the only psychiatric disorder in which medications can prevent acute cycles of bipolar behavior. Once thought to help reduce manic behavior only, lithium and these anticonvulsants also protect against the effects of bipolar depressive cycles. If a client in the acute stage of mania or depression exhibits psychosis (disordered think-ing as seen with delusions, hallucinations, and illusions), an antipsychotic agent is administered in addition to the bipolar medications. Some clients keep taking both bipo-lar medications and antipsychotics.

Lithium. Lithium is a salt contained in the human body; it is similar to gold, copper, magnesium, manganese, and other trace elements. Once believed to be helpful for bipo-lar mania only, investigators quickly realized that lithium also could partially or completely mute the cycling toward bipolar depression. The response rate in acute mania to lithium therapy is 70% to 80%. In addition to treating the range of bipolar behaviors, lithium also can stabilize bipo-lar disorder by reducing the degree and frequency of cy-cling or eliminating manic episodes (Freeman, Wiegand,Gelenberg, 2006).

Lithium not only competes for salt receptor sites but also affects calcium, potassium, and magnesium ions as well as glucose metabolism. Its mechanism of action is unknown, but it is thought to work in the synapses to has-ten destruction of catecholamines (dopamine, norepi-nephrine), inhibit neurotransmitter release, and decrease the sensitivity of postsynaptic receptors (Facts and Com-parisons, 2009).

Lithium’s action peaks in 30 minutes to 4 hours for regular forms and in 4 to 6 hours for the slow-release form. It crosses the blood–brain barrier and placenta and is dis-tributed in sweat and breast milk. Lithium use during pregnancy is not recommended because it can lead to first-trimester developmental abnormalities. Onset of action is 5 to 14 days; with this lag period, antipsychotic or antide-pressant agents are used carefully in combination with lithium to reduce symptoms in acutely manic or acutely depressed clients. The half-life of lithium is 20 to 27 hours (Facts and Comparisons, 2009).

Anticonvulsant Drugs. Lithium is effective in about 75% of people with bipolar illness. The rest do not respond or have difficulty taking lithium because of side effects, prob-lems with the treatment regimen, drug interactions, or medical conditions such as renal disease that contraindi-cate use of lithium. Several anticonvulsants traditionally used to treat seizure disorders have proved helpful in sta-bilizing the moods of people with bipolar illness. These drugs are categorized as miscellaneous anticonvulsants. Their mechanism of action is largely unknown, but they may raise the brain’s threshold for dealing with stimula-tion; this prevents the person from being bombarded with external and internal stimuli (Table 15.7). 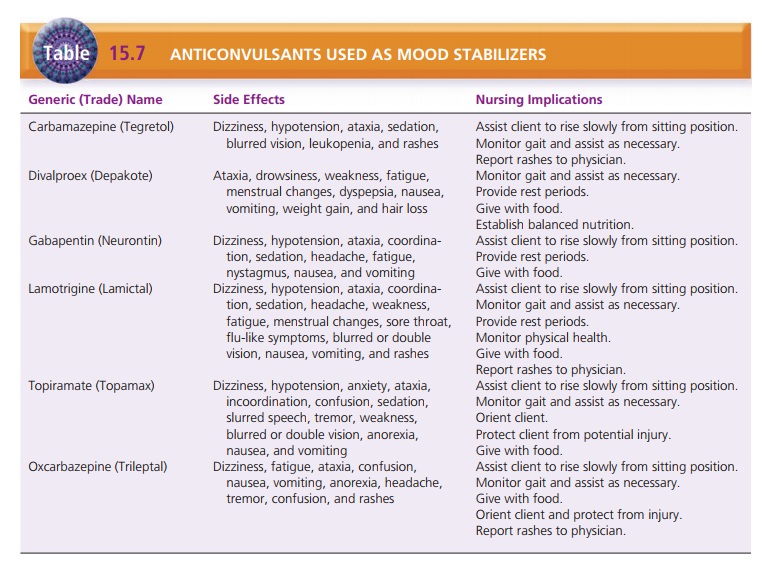 Carbamazepine (Tegretol), which had been used for grand mal and temporal lobe epilepsy as well as for trigem-inal neuralgia, was the first anticonvulsant found to have mood-stabilizing properties, but the threat of agranulocy-tosis was of great concern. Clients taking carbamazepine need to have drug serum levels checked regularly to moni-tor for toxicity and to determine whether the drug has reached therapeutic levels, which are generally 4 to 12 µg/ mL (Ketter, Wang & Post, 2006). Baseline and periodic laboratory testing must also be done to monitor for sup-pression of white blood cells.

Valproic acid (Depakote), also known as divalproex sodium or sodium valproate, is an anticonvulsant used for simple absence and mixed seizures, migraine prophylaxis, and mania. The mechanism of action is unclear. Therapeu-tic levels are monitored periodically to remain at 50 to 125 µg/mL, as are baseline and ongoing liver function tests, including serum ammonia levels and platelet and bleeding times (Bowden, 2006).

Gabapentin (Neurontin), lamotrigine (Lamictal), and topiramate (Topamax) are other anticonvulsants some-times used as mood stabilizers, but they are used less fre-quently than valproic acid. Value ranges for therapeutic levels are not established.

Clonazepam (Klonopin) is an anticonvulsant and a benzodiazepine (a schedule IV controlled substance) used in simple absence and minor motor seizures, panic disor-der, and bipolar disorder. Physiologic dependence can develop with long-term use. This drug may be used in lithium or other mood stabilizers but is not used alone to manage bipolar disorder.

Psychotherapy can be useful in the mildly depressive or normal portion of the bipolar cycle. It is not useful during acute manic stages because the person’s attention span is brief and he or she can gain little insight during times of

accelerated psychomotor activity. Psychotherapy com-bined with medication can reduce the risk for suicide and injury, provide support to the client and family, and help the client to accept the diagnosis and treatment plan.