Major Causes of Postpartum Hemorrhage and their Management

Ordinarily, the uterine corpus contracts promptly after delivery of the placenta, constricting the spiral arteries in the newly created placental bed, and preventing excessive bleeding.

MAJOR CAUSES OF POSTPARTUM HEMORRHAGE AND THEIR MANAGEMENT

Ordinarily, the uterine corpus contracts promptly after delivery of the placenta, constricting the spiral arteries in the newly created placental bed, and preventing excessive bleeding. This muscular contraction, rather than coagu-lation, prevents excessive bleeding from the placental implantation site. When contraction does not occur as expected, the resulting uterine atony leads to PPH.

Conditions that predispose to uterine atony include those in which there is extraordinary enlargement of the uterus (such as polyhydramnios or twins); abnormal labor (both precipitous and prolonged, or augmented by oxy-tocin); and conditions that interfere with contraction of the uterus (such as uterine leiomyomata or magnesium sulfate). The clinical diagnosis of atony is based largely on the tone of the uterine muscle on palpation. Instead of the normally firm, contracted uterine corpus, a softer, more pliable— often called “boggy”—uterus is found. The cervix is usu-ally open. Frequently, the uterus contracts briefly when massaged, only to become relaxed again when the manipu-lation ceases.

Because hemorrhage can occur in the absence of atony, other etiologies must be sought in the presence of a firm fundus.

Management of uterine atony is both preventive and therapeutic. Active management of the third stage of labor (theinterval between the delivery of the fetus and delivery of the pla-centa), has been shown to reduce the incidence of PPH hemor-rhage by as much as 70%. The protocol for management ofthe third stage includes oxytocin infusion (usually 20 units in 1 liter of normal saline infused at 200–500 mL/hr) initi-ated immediately following delivery of the infant or its ante-rior shoulder, gentle cord traction, and uterine massage. Some physicians do not begin oxytocin infusion until after delivery of the placenta to avoid placental entrapment. However, there is no firm evidence that the rates of entrap-ment are higher with active management than with other strategies. Immediate breastfeeding may also enhance uterine contractility and, thus, reduce blood loss.

Once uterine atony is diagnosed, management can be categorized as medical, manipulative, or surgical. Manage-ment must be individualized in cases of severe uterine atony, taking into account the extent of hemorrhage, the overall status of the patient, and her future childbearing desires (see Box 12.2). 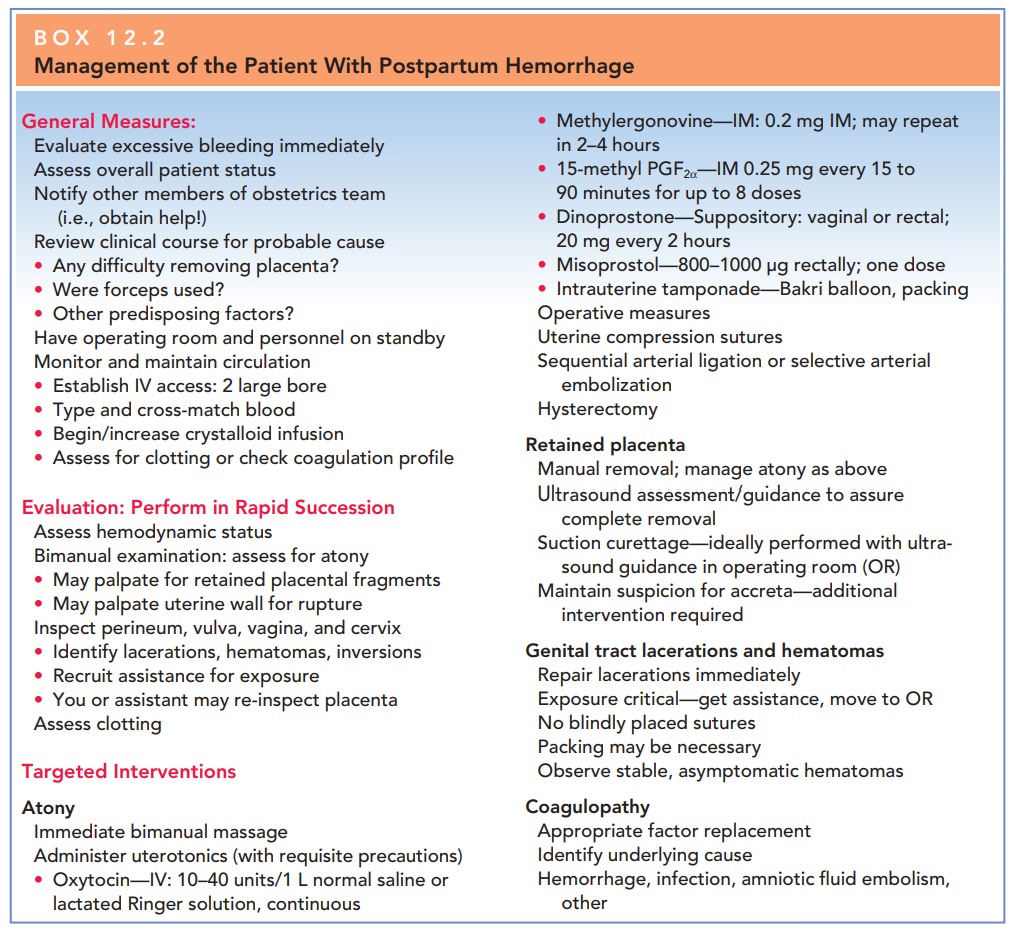 Bimanual uterine massage alone is often successful in caus-ing uterine contraction, and this should be done while preparations for other treatments are under way (Fig. 12.1).Uterotonicagents include oxytocin, methylergonovine maleate, miso-prostol (an analogue of prostaglandin E1), dinoprostone (an analogue of prostaglandin E2), and 15-methyl prostaglandin F2α, administered separately or in combination. Methyl-ergonovine maleate is a potent uterotonic agent that cancause uterine contractions within several minutes. It is always given intramuscularly, because rapid intravenous administration can lead to dangerous hypertension, and its use is often avoided in those with hypertensive disorders. 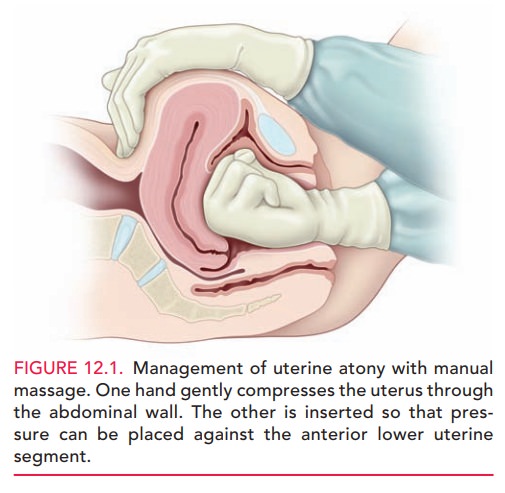 Though it should be avoided or used with extreme caution in those with cardiac, pulmonary, liver, or renal diseases, 15-methyl prostaglandin F2may be given intramuscu-larly or directly into the myometrium. Dinoprostone may be given by vaginal or rectal suppository. Misoprostol has recently been used for treatment and prevention of PPH. These prostaglandins result in strong uterine contractions. Typically, oxytocin is given prophylactically, as noted previously; if uterine atony occurs, the infusion rate is increased, and additional agents are given sequentially.

Uterotonic agents are only effective for uterine atony. If the uterus is firm, the use of these agents is not necessary and other causes of bleeding should be explored.

Occasionally, uterine massage and uterotonic agents are unsuccessful in bringing about adequate uterine con-traction, and other measures must be used. Some practi-tioners use intrauterine compression with in utero packing or placement of a balloon compression device as a means of halting blood loss while preserving the uterus.

Surgical management of uterine atony may includeuterine compression sutures (B-Lynch or multiple squares), sequential arterial ligation (ascending or descending branches of the uterine, utero-ovarian, then internal iliac arteries), selective arterial embolization, and hysterectomy (Fig. 12.2). Very high success rates have been noted with surgi-cal compression techniques, with consequent decreases in the use of hysterectomy and iliac artery ligations, both of which are asso-ciated with high rates of morbidity. Additional advantages ofcompression techniques include rapid execution and preservation of fertility. 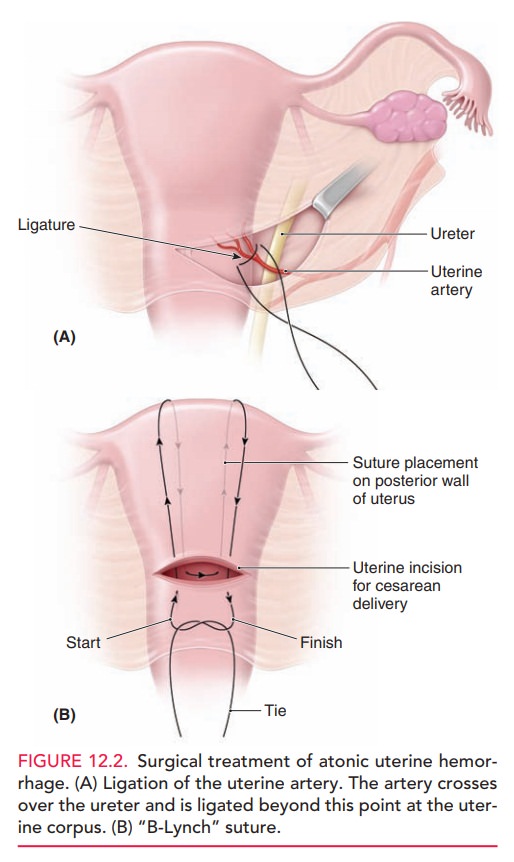 Lacerations of the Lower Genital Tract

Lacerations of the lower genital tract are far less commonthan uterine atony as a cause of PPH, but they can be seri-ous and require prompt surgical repair. Predisposing factorsinclude instrumented delivery, manipulative delivery such as a breech extraction, precipitous labor, presentations other than occiput anterior, and macrosomia.

Although minor lacerations to the cervix are common in delivery, extensive lacerations and those that are actively bleeding usually require repair. To minimize blood loss caused by significant cervical and vaginal lacerations, all patients with any predisposing factors, or any patient in whom blood loss soon after delivery appears to be exces-sive despite a firm and contracted uterus, should have a careful repeat inspection of the lower genital tract. This vaginal examination may require assistance to allow ade-quate visualization. As a rule, repair of these lacerations is usually not difficult, if adequate exposure is provided.

Lacerations of the vagina and perineum (first-degree through fourth-degree vaginal and periurethral lacera-tions) are not common causes of substantial blood loss, although the steady loss of blood, which may come from deeper lacerations, may be so significant that their repair when bleeding is requisite.

Periurethral lacerations may be associated with sufficient edema to occlude the urethra, causing urinary retention; a Foley catheter for 12 to 24 hours usually alleviates this problem.

Normally, separation of the placenta from the uterus occurs because of cleavage between the zona basalis and the zonaspongiosa facilitated by uterine contraction. Once separa-tion occurs, expulsion is caused by strong uterine contrac-tions. Retained placenta can occur when either the process of separation or the process of expulsion is incomplete. Predisposing factors to retained placenta include a previous cesarean delivery, uterine leiomyomata, prior uterine curet-tage, and succenturiate placental lobe.

Placental tissue remaining in the uterus can prevent adequate contractions, leading to atony and excessive bleeding.

After expulsion, every placenta should be inspected to detect missing placental cotyledons, which may remain in the uterus.

Sheared or abruptly ending surface vessels may indicate an accessory, or succenturiate, placental lobe. If retained placenta is suspected—either because of apparently absent cotyledons or because of excessive bleeding—it can often be removed by inserting two fingers through the cervix into the uterine cavity, and manipulating the retained tis-sue downward into the vagina. If this is unsuccessful, or if there is uncertainty regarding the cause of hemorrhage, an ultrasound examination of the uterus can be helpful. Curettage with a suction apparatus and/or a large, sharp curette may be used to remove the retained tissue. Care must be exercised to avoid perforation through the uterine fundus.

If a portion of the placenta separates and the remainder stays attached, hysterectomy is often required. However, an attempt to separate the placenta by curettage or other means of controlling the bleeding (such as surgical compres-sion or sequential arterial ligation) is usually appropriate in trying to avoid a hysterectomy in a woman who desires more children.

Other Causes of Postpartum Hemorrhage

Hematomas can occur anywhere from the vulva to theupper vagina as a result of delivery trauma. Hematomas may also develop at the site of episiotomy or perineal lac-eration. Hematomas may occur without disruption of the vaginal mucosa, when the fetus or forceps causes shearing of the submucosal tissues without mucosal tearing.

Vulvar or vaginal hematomas are characterized by exquisite pain with or without signs of shock. Hematomasthat are ≤5 cm in diameter and are not enlarging can usually be managed expectantly by frequent evaluation of the size of the hematoma and close monitoring of vital signs and urinary out-put. Application of ice packs can also be helpful. Largerand enlarging hematomas must be managed surgically. If the hematoma is at the site of episiotomy, the sutures should be removed and a search made for the actual bleed-ing site, which is then ligated. If it is not at the episiotomy site, the hematoma should be opened at its most depen-dent portion and drained, the bleeding site identified, if possible, and the site closed with interlocking hemostatic sutures. Drains and vaginal packs are often used to prevent reaccumulation of blood. It should be noted that large amounts of blood can dissect and accumulate along tissue planes, especially into the ischiorectal fossa, precluding easy identification. This may be seen in those with trauma involving the vaginal side walls and sulci. Thus, careful monitoring of hemodynamic status is important in identi-fying those with occult bleeding.

When assessing a patient with PPH, a specimen of the blood that is passing from the genital tract should be obtained in a plain test tube to check whether the blood is clotting.

It also should be recalled that profuse hemorrhage itself can lead to coagulopathy, thus creating a vicious cycle of bleeding.

Amniotic fluid embolism is a rare, sudden, and oftenfatal obstetric complication thought to be caused primar-ily by entry of amniotic fluid into the maternal circulation. Significant biochemical, as well as physical, mediators are thought to be involved in the development of the clinical scenario, which unfolds as five findings that occur in sequence: (1) respiratory distress, (2) cyanosis, (3) cardio-vascular collapse, (4) hemorrhage, and (5) coma. The syn-drome also often results in severe coagulopathy. Treatmentis directed toward total support of the cardiovascular and coagulation systems, although maternal mortality still approaches 30% to 50% in most series.

Uterine inversion is a rare condition in which the uterusliterally turns inside out, with the top of the uterine fun-dus extending through the cervix into the vagina and some-times even past the introitus (Fig. 12.3). Hemorrhage with uterine inversion is characteristically severe and sudden. Treatment includes manual replacement, which frequently requires administration of an agent that causes uterine relaxation (such as terbutaline, magnesium sulfate, halo-genated general anesthetics, and nitroglycerin). If manual replacement fails, surgery is required. 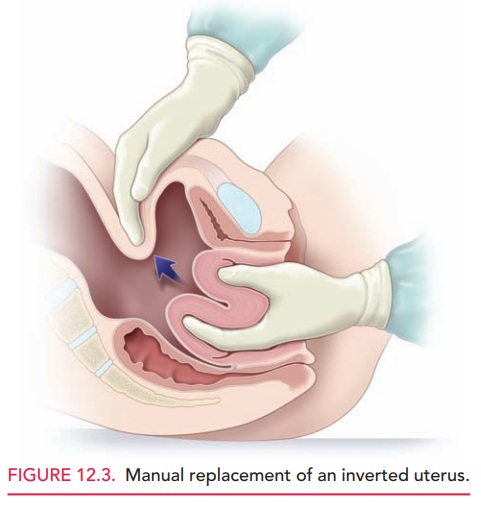 Uterine rupture should be distinguished from dehiscence of a low transverse incision, as the clinical connotations are quite different. A uterine rupture is a frank opening between the uterine cavity and the abdominal cavity. A uterine dehiscence is a “window” covered by the vis-ceral peritoneum. Significantly higher rates of maternal and fetal morbidity, and even maternal mortality, occur in cases of overt rupture.

Rupture can occur at the site of a previous cesarean delivery or other surgical procedure involving the uterine wall—from intrauterine manipulation or trauma, or from congenital malformation (small uterine horn), or sponta-neously. Abnormal labor, operative delivery, and placenta accreta can lead to rupture. Surgical repair is required, with the specific approach tailored to reconstruct the uterus, if possible. Care depends on the extent and site of rupture, the patient’s current clinical condition, and her desire for future childbearing. Rupture of a previous cesarean delivery scar often can be managed by revision of the edges of the prior incision, followed by primary closure. In addition to the myometrial disruption, consideration must be given to the neighboring structures, such as the broad ligament, para-metrial vessels, ureters, and bladder.

Regardless of the patient’s wishes for the avoidance of hysterectomy, this pro-cedure may be necessary in a life-threatening situation. Careful assessment in the face of maternal hemodynamic changes and monitoring other signs, such as acute abdominal pain, change in abdominal contour, non-reassuring fetal heart patterns, and loss of fetal station, are critical in early detection and interven-tion in such cases.