MACS Based on Hash Functions: HMAC

MACS BASED ON HASH FUNCTIONS: HMAC

Later in this chapter, we look at examples of a MAC based on the use of a symmet- ric block cipher. This has traditionally been the most common approach to constructing a MAC. In recent years, there has been increased interest in developing a MAC derived from a cryptographic hash function. The motivations for this interest are

With the development of AES and the more widespread availability of code for encryption algorithms, these considerations are less significant, but hash-based MACs continue to be widely used.

A hash function such as SHA was not designed for use as a MAC and cannot be used directly for that purpose, because it does not rely on a secret key. There have been a number of proposals for the incorporation of a secret key into an existing hash algorithm. The approach that has received the most support is HMAC [BELL96a, BELL96b]. HMAC has been issued as RFC 2104, has been chosen as the mandatory-to-implement MAC for IP security, and is used in other Internet proto- cols, such as SSL. HMAC has also been issued as a NIST standard (FIPS 198).

•                           To have a well understood cryptographic analysis of the strength of the authentication mechanism based on reasonable assumptions about the embedded hash function.

The first two objectives are important to the acceptability of HMAC. HMAC treats the hash function as a “black box.” This has two benefits. First, an existing implementation of a hash function can be used as a module in implementing HMAC. In this way, the bulk of the HMAC code is prepackaged and ready to use without modification. Second, if it is ever desired to replace a given hash function in an HMAC implementation, all that is required is to remove the existing hash func- tion module and drop in the new module. This could be done if a faster hash func- tion were desired. More important, if the security of the embedded hash function were compromised, the security of HMAC could be retained simply by replacing the embedded hash function with a more secure one (e.g., replacing SHA-2 with SHA-3).

The last design objective in the preceding list is, in fact, the main advantage of HMAC over other proposed hash-based schemes. HMAC can be proven   secure provided that the embedded hash function has some reasonable cryptographic strengths. We return to this point later in this section, but first we examine the struc- ture of HMAC.

b = number of bits in a block

K = secret key; recommended length is Š n; if key length is greater than b, the key is input to the hash function to produce an n-bit key 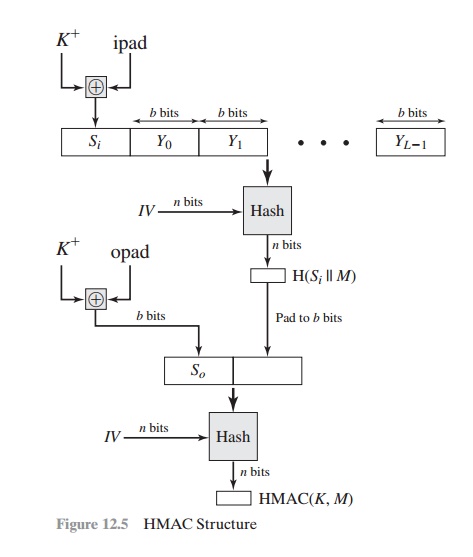 We can describe the algorithm as follows.

HMAC should execute in approximately the same time as the embedded hash function for long messages. HMAC adds three executions of the hash compression function (for Si, So, and the block produced from the inner hash).

A more efficient implementation is possible, as shown in Figure 12.6. Two 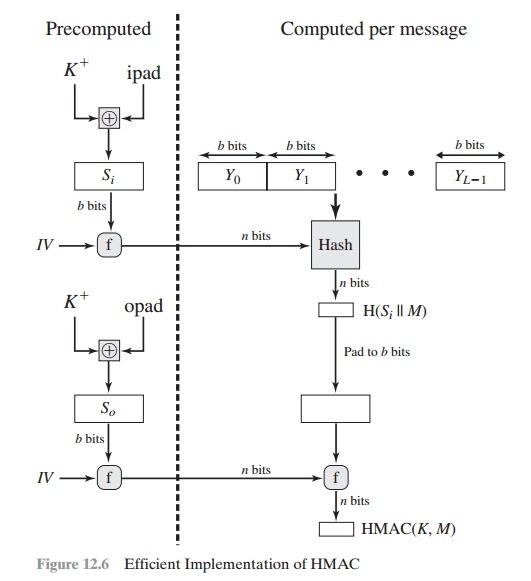 The security of a MAC function is generally expressed in terms of the probability of successful forgery with a given amount of time spent by the forger and a given number of message–tag pairs created with the same key. In essence, it is proved in [BELL96a] that for a given level of effort (time, message–tag pairs) on messages generated by a legitimate user and seen by the attacker, the probability of successful attack on HMAC is equivalent to one of the following attacks on the embedded hash function.

In the second attack, the attacker is looking for two messages M and M¿ that produce the same hash: H(M)  =  H(M¿). This is the birthday attack discussed in Chapter 11. We have shown that this requires a level of effort of 2n/2 for a hash length of n. On this basis, the security of MD5 is called into question, because a level of effort of 264 looks feasible with today’s technology. Does this mean that a 128-bit hash function such as MD5 is unsuitable for HMAC? The answer is no, because of  the following argument. To attack MD5, the attacker can choose any set of messages and work on these off line on a dedicated computing facility to find a collision. Because the attacker knows the hash algorithm and the default IV, the attacker can generate the hash code for each of the messages that the attacker generates. However, when attacking HMAC, the attacker cannot generate message/code pairs off line because the attacker does not know K. Therefore, the attacker must observe   a sequence of messages generated by HMAC under the same key and perform the attack on these known messages. For a hash code length of 128 bits, this requires 264 observed blocks (272 bits) generated using the same key. On a 1-Gbps link, one would need to observe a continuous stream of messages with no change in key for about 150,000 years in order to succeed. Thus, if speed is a concern, it is fully accept- able to use MD5 rather than SHA-1 as the embedded hash function for HMAC.