Infection of an Escherichia coli cell by bacteriophage can have two possible outcomes. A portion of the cells (as many as 90%) enters the lytic cycle and produces more phage.

Infection of an Escherichia coli cell by bacteriophage can have two possible outcomes. A portion of the cells (as many as 90%) enters the lytic cycle and produces more phage. The remainder of the cells enter the latent state by forming stable lysogens. The propor-tion of the population that lyses depends on as yet undefined factors including the nutri-tional and physiologic state of the bacteria. In the lysogenic state, the phage DNA is physically inserted into the bacterial chromosome  and thus replicates when the bacterial DNA replicates. Lambda can thus replicate either extrachromosomally as in the lytic cycle or as a part of the bacterial chromosome in lysogeny. The only phage gene that remains active in a lysogen is the gene that codes for a repressor protein that turns off expression of all of the prophage genes except its own. This means that the lyso-genic state can persist as long as the bacterial strain survives. Environmental insults such as exposure to ultraviolet light or mutagens, cause inactivation of the repressor, resulting in induction of the lysogen. The prophage DNA is excised from the bacterial chromo-some, and a lytic cycle ensues.

Once established, perpetuation of the lysogenic state requires a mechanism to ensure that copies of the phage genes are faithfully passed on to both daughter cells during cell di-vision. Integration of the genome into the E. coli chromosome guarantees its replication and successful segregation during cell division. In bacteriophage P1 lysogens, the viral genome exists extrachromosomally as an autonomous single-copy plasmid. Its replication is tightly coupled to chromosomal replication and the two replicated copies are precisely partitioned along with the cellular chromosomes to daughter cells during cell division.

Because of its mechanistic importance and relevance to lysogenic conversion and phage transduction ,l integration and the reverse reaction called excision are de-scribed in some detail. Bacteriophage  l integrates by a site-specific, reciprocal recombina-tion event as outlined in Figure 7 – 1. There exist unique sequences on both the phage and 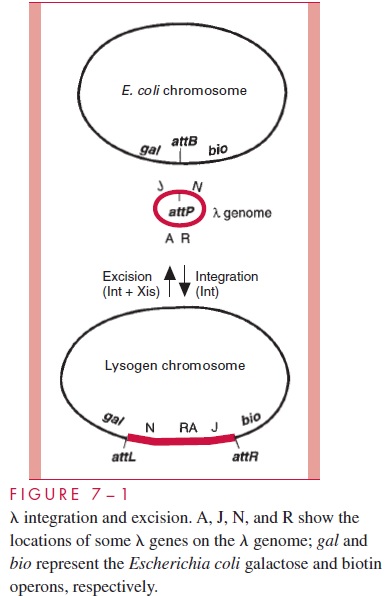 bacterial chromosomes called attachment sites where the crossover occurs. The phage at-tachment site is called attP and the bacterial site, which is found on the E. coli chromosome between the galactose and biotin operons, is called attB. The recombination reaction is cat-alyzed by the phage-encoded integrase protein (Int) in conjunction with two host proteins and occurs by a highly concerted reaction that requires no new DNA synthesis.

Excision of the phage genome after induction of a lysogen is just the reverse of inte-gration, except that excision requires, in addition to the Int protein, a second phage protein called Xis. In this case the combined activities of these two proteins catalyze site-specific recombination between the two attachment sites that flank the prophage DNA, attL and attR (see Fig 7 – 1). Early after infection, when integration is to occur in those cells des-tined to become lysogens, synthesis of the Xis protein is blocked. Otherwise, the inte-grated prophage DNA would excise soon after integration and stable lysogeny would be impossible. However, after induction of a lysogen, both the integrase and the Xis proteins are synthesized and catalyze the excision event that releases the prophage DNA from the chromosome.

At a very low frequency, excision involves sites other than the attL and attR borders of the prophage and results in the linking of bacterial genes to the phage genome. Thus, if a site to the left of the bacterial gal genes recombines with a site within the genome (to the left of the J gene, otherwise the excised genome is too large to be packaged), then the resulting phage can transduce the genes for galactose metabolism to another cell . Similarly, transducing particles can be formed that carry the genes involved in biotin biosynthesis. Because only those cellular genes adjacent to the attachment site can be acquired by an aberrant excision event, this process is called specialized transduction to distinguish it from generalized transduction, in which virtually any bacterial gene can be transferred by a headful packaging mechanism.

Occasionally, one or more phage genes, in addition to the gene coding for the repres-sor protein, are expressed in the lysogenic state. If the expressed protein confers a new phenotypic property on the cell, then it is said that lysogenic conversion has occurred. Diphtheria, scarlet fever, and botulism are all caused by toxins produced by bacteria that have been “converted” by a temperate bacteriophage. In each case, the gene that codes for the toxin protein resides in the phage DNA and is expressed along with the repressor gene in the lysogenic state. It remains a mystery as to how these toxin genes were acquired by the phage; it is speculated that they may have been picked up by a mechanism similar to specialized transduction.