Lysergic acid diethylamide (LSD)* is the synthetic dieth-ylamide derivative of ergot alkaloids, and was originally synthesised exclusively from these alkaloids produced by the fungus Claviceps purpurea, which is a contaminant of rye and certain other grains.

·              Lysergic acid diethylamide (LSD)* is the synthetic dieth-ylamide derivative of ergot alkaloids, and was originally synthesised exclusively from these alkaloids produced by the fungus Claviceps purpurea, which is a contaminant of rye and certain other grains. 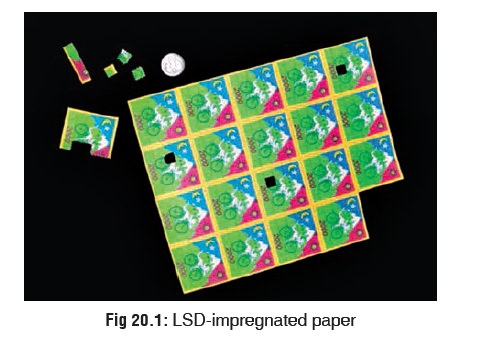 ·     LSD is said to be the most powerful of all hallucino-gens, and is active in doses of 50 to 100 mcg. It occurs as a water-soluble, colourless, tasteless, and odourless powder. ·              LSD inhibits central raphe neurons of brainstem through stimulation of 5-HT1A receptors, which are coupled to adenylcyclase.

·              LSD is also an agonist at 5-HT receptors, which are not located presynaptically on serotonergic cell bodies but on certain subpopulations of neurons in postsynaptic regions. The majority of 5-HT2 receptors in the brain are located in the cerebral cortex. Animal experiments have shown that LSD is anatomically distributed maximally in the visual and auditory cortex, and the limbic cortex (besides the pituitary, pineal, and hypothalamic areas), which parallels the finding of high concentration of 5-HT2 receptors in human cerebral cortex.

·              Recent studies also suggest that activation of D1 (dopamine) receptors may contribute to the neurochemical effects of LSD.

·     The route of metabolism is hepatic hydroxylation.

·              Bizarre perceptual changes: People’s facesand body parts appear distorted, objects undu-late, sounds may be magnified and distorted, colours seem brighter with halos around objects. Occasionally there is depersonalisation, and the hallucinating person may feel as if he is observing an event instead of being involved in it.

·              Prolonged psychotic reactions which are mainly schizo-phrenic in nature.

·              Flashback phenomena: The person re-lives the LSDexperience periodically in the absence of drug intake for months or years.

·              Post-hallucinogen perception disorder: A persistentperceptual disorder often described by the person as if he is residing in a bubble under water in a “purple haze” with trailing of lights and images. Associated anxiety, panic, and depression are common. The following unusual phenomena have also been reported:

o     Pareidolias—images of faces on floor and walls, floating faces hovering in space.

·      Do not use restraints in agitated patients; it will only exac-erbate the condition.

·      Because of the short half-life and few serious medical reactions, elimination enhancement procedures such as haemodialysis, haemoperfusion, etc., are not warranted.

·      Treat acute psychotic reactions with cautious administration of neuroleptics such as haloperidol. Avoid phenothiazines which can cause hypotension, sedation, extrapyramidal reactions, lowered seizure threshold, and potentiation of anticholinergic effects.

·      Treat post-hallucinogen perception disorder with long-lasting benzodiazepines such as clonazepam, and to a lesser extent anticonvulsants such as valproic acid and carbamazepine. This approach must be combined with behavioural therapy. The patient must be instructed not to consume alcohol, cannabis, caffeine, and other drugs which can intensify the disorder.