The immune system is organized on several special tissues, collectively designated as lymphoid or immune tissues. 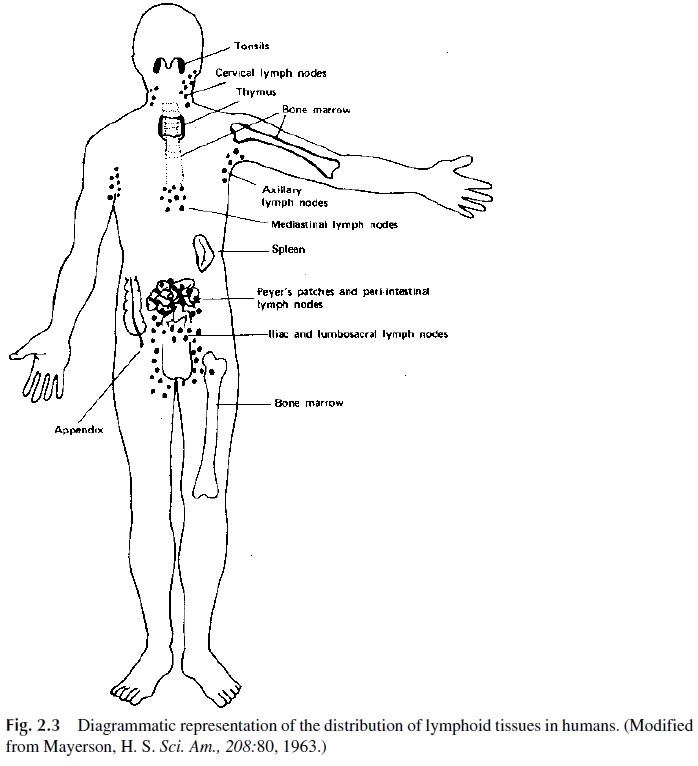 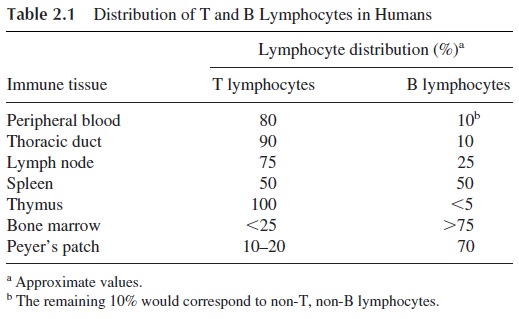 The lymph nodes are extremely numerous and disseminated all over the body. They mea-sure 1–25 mm in diameter and play a very important and dynamic role in the initial or in-ductive states of the immune response.

The lymph nodes are circumscribed by a connective tissue capsule. Afferent lymphatics draining peripheral interstitial spaces enter the capsule of the node and open into the sub-capsular sinus. The lymph node also receives blood from the systemic circulation through the hilar arteriole. Two main regions can be distinguished in a lymph node: the cortex and the medulla. The cortex and the deep cortex (also known as paracortical area) are densely populated by lymphocytes, in constant traffic between the lymphatic and systemic circula-tion. In the cortex, at low magnification, one can distinguish roughly spherical areas containing densely packed lymphocytes, termed follicles or nodules (Fig. 2.4). 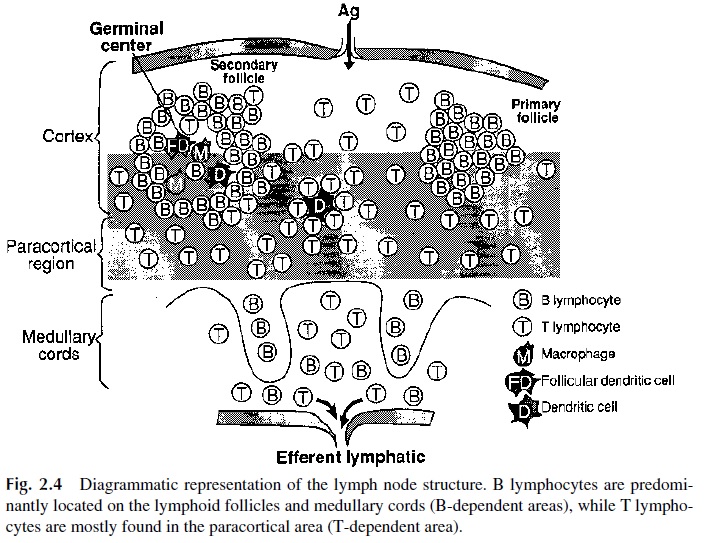 ·              The primary follicles are very densely packed with small naive B lymphocytes.

·              In a lymph node draining an area in which an infection has taken place, one will find larger, less dense follicles, termed secondary follicles, containing a dark, packed mantle, where naive B cells predominate, and clear germinal centers where B lymphocytes are actively dividing as a result of antigenic stimulation.

Nonstimulated B cells enter the germinal center by the mantle area of the basal dark zone. In the light zone, B cells interact with antigens retained by the follicular dendritic cells and start to proliferate. 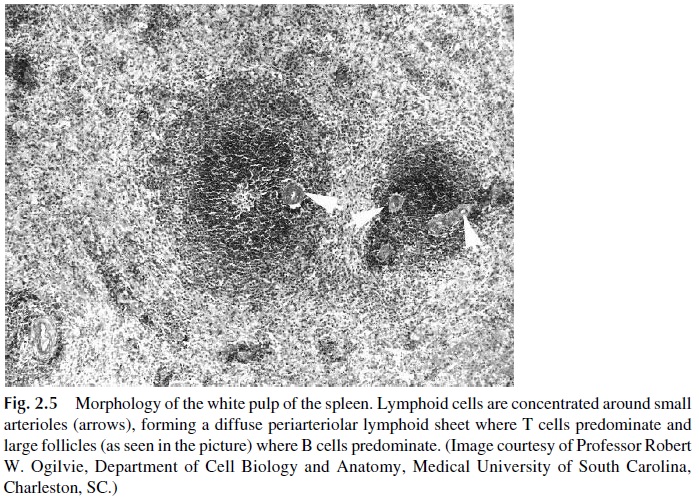 The proliferation of B cells in germinal centers is associated with phenotypic changes (membrane IgD ceases to be expressed) and with somatic muta-tions affecting the genes coding for the variable regions of the immunoglobulin molecule. The proliferation and differentiation of B cells continues on the api-cal light zone, where B lymphocytes eventually differentiate into plasma cells and memory B cells. In humans, both plasmablasts and memory B cells leave the lymph node through the medullary cords. Memory B cells enter recirculation patterns. Plasmablasts home to the bone marrow, where they fully differentiate into plasma cells.

In the deep cortex or paracortical area, which is not as densely populated as the fol-licles, T lymphocytes are the predominant cell population, and for this reason the paracor-tical area is designated as T-dependent. Dendritic cells are also present in this area, where they present antigen to T lymphocytes.

The medulla, less densely populated, is organized into medullary cords draining into the hilar efferent lymphatic vessels. Plasmablasts can be easily identified in the medullary cords.

The lymph nodes can be compared to a network of filtration and communication stations where antigens are trapped and messages are interchanged between the different cells in-volved in the immune response. This complex system of interactions is made possible by the dual circulation in the lymph nodes. Lymph nodes receive both lymph and arterial blood flow. The afferent lymph, with its cellular elements, percolates from the subcapsular sinus  to the efferent lymphatics via cortical and medullary sinuses, and the cellular elements of the lymph have ample opportunity to migrate into the lymphocyte-rich cortical structures during their transit through the nodes. The artery that penetrates through the hilus brings peripheral blood lymphocytes into the lymph node; these lymphocytes can leave the vas-cular bed at the level of the high endothelial venules located in the paracortical area.

Thus, lymph nodes can be considered as the anatomical fulcrum of the immune re-sponse. Soluble or particulate antigens reach the lymph nodes primarily through the lym-phatic circulation. Once in the lymph nodes, antigen is concentrated on the antigen-retain-ing reticulum formed by the follicular dendritic cells. The antigen is retained by these cells in its unprocessed form, often associated with antibody (particularly during secondary im-mune responses), and is efficiently presented to B lymphocytes. The B lymphocytes rec-ognize specific epitopes but are also able to internalize and process the antigen, presenting antigen-derived peptides associated to MHC II molecules to helper T lymphocytes, whose “help” is essential for the proper activation and differentiation of the B cells presenting the antigen .

The spleen is an organ with multiple functions. Its protective role against infectious dis-eases is related both to its filtering functions and to the presence of lymphoid structures able to support the initial stages of the immune response.

Surrounded by a connective tissue capsule, the parenchyma of this organ is heteroge-neous, constituted by the white and the red pulp. The white pulp is rich in lymphocytes, arranged in periarteriolar lymphatic sheaths that surround the narrow central arterioles, derived from the splenic artery after multiple branchings, and follicles, which lie more peripherally relative to the arterioles (Fig. 2.5). T cells are concentrated in the periarteri-olar lymphatic sheaths, whereas B lymphocytes are concentrated in the follicles. The fol-licles may or may not show germinal centers, depending on the state of activation of the resident cells.

The red pulp surrounds the white pulp. Blood leaving the white pulp through the cen-tral arterioles flows into the penicillar arteries and from there directly into the venous si-nuses. The red pulp is formed by these venous sinuses which are bordered by the splenic cords (cords of Billroth), where macrophages abound. From the sinuses, blood reenters the systemic circulation through the splenic vein.

Between the white and the red pulp lies an area known as the marginal zone, more sparsely cellular than the white pulp, but very rich in macrophages and B lymphocytes.

The spleen is the lymphoid organ associated with the clearing of particulate matter, in-fectious organisms, and aged or defective formed elements (e.g., spherocytes, ovalocytes) from the peripheral blood. The main filtering function is performed by the macrophages lining up the splenic cords. In the marginal zone circulating antigens are trapped by the macrophages, which will then be able to trap and process the antigen, migrate deeper into the white pulp, and initiate the immune response by interacting with T and B lympho-cytes.

The thymus is the only clearly individualized primary lymphoid organ in mammals. It is believed to play a key role in determining the differentiation of T lymphocytes.

The thymus, whose microscopic structure is illustrated in Fig. 2.6, is located in the superior mediastinum, anterior to the great vessels. It has a connective tissue capsule from which emerge the trabeculae, which divide the organ into lobules. Each lobule has a cortex and medulla, and the trabeculae are coated with epithelial cells. 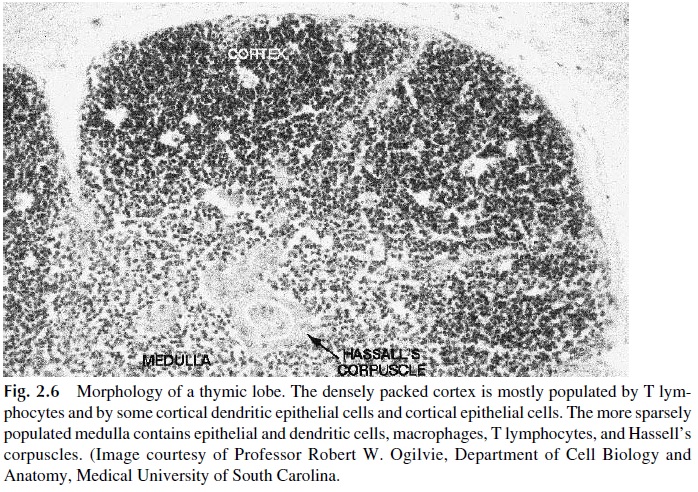 The cortex, an area of intense cell proliferation, is mainly populated by immunolog-ically immature T lymphocytes. A small number of macrophages and plasma cells are also present. In addition, the cortex contains two subpopulations of epithelial cells, the epithe-lial nurse cells and the cortical epithelial cells, which form a network within the cortex.

The thymus is believed to be the organ where T lymphocytes differentiate during embry-onic life and thereafter, although for how long the thymus remains functional after birth is unclear (recent data show that 30% of individuals 40 years of age or older retain substan-tial thymic tissue and function). The thymic cortex is an area of intense cell proliferation and death (only 1% of the cells generated in the thymus eventually mature and migrate to the peripheral tissues).

Tonsils, localized in the oropharynx, are predominantly populated by B lymphocytes and are the site of intense antigenic stimulation, as reflected by the presence of numerous secondary follicles with germinal centers in the tonsilar crypts (Fig. 2.7). 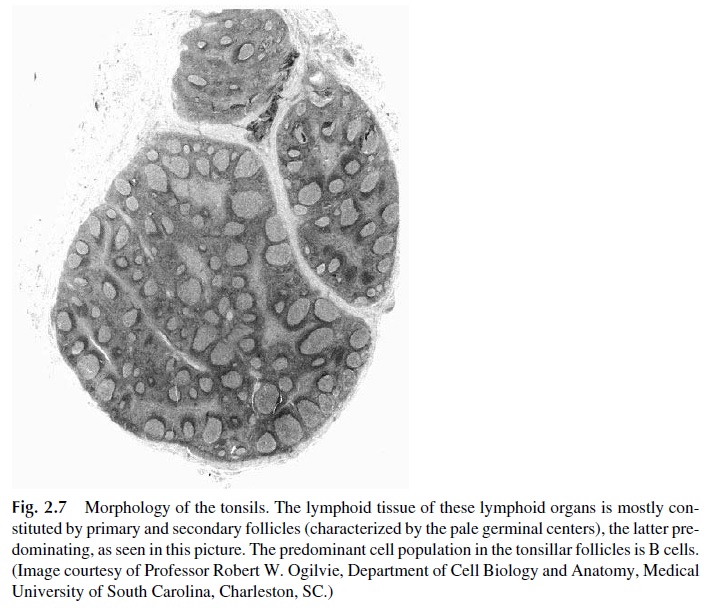 Peyer’s patches are lymphoid structures disseminated through the submucosal space of the small intestine (Fig. 2.8). The follicles of the intestinal Peyer’s patches are extremely rich in B cells, which differentiate into IgA-producing plasma cells. Specialized epithelial cells known as M cells abound in the dome epithelia of Peyer’s patches, particularly at the ileum. These cells take up small particles (virus, bacteria, etc.) and deliver them to submu-cosal macrophages, where the engulfed material will be processed and presented to T and B lymphocytes. 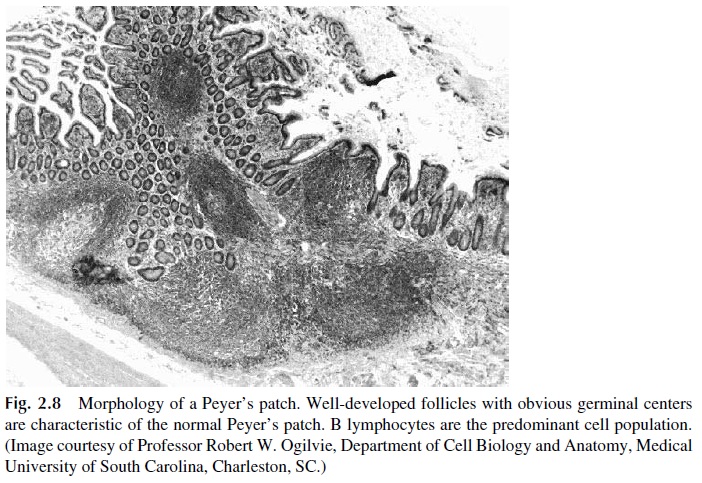 T lymphocytes are also diffusely present in the intestinal mucosa, the most abundant of them expressing membrane markers, which are considered typical of memory helper T cells. This population appears to be critically involved in the induction of humoral immune responses. A special subset of T cells, with a different type of T-cell receptor (γ/δ T lym-phocytes), is well represented on the small intestine mucosa. These lymphocytes appear to recognize and destroy infected epithelial cells by a nonimmunological mechanism (i.e., not involving the T-cell receptors).