B lymphocytes or B cells are so designated because the bursa of Fabricius, a lym-phoid organ located close to the caudal end of the gut in birds, plays a key role in their differentiation.

CELLS OF THE IMMUNE SYSTEM

The lymphocytes (Fig. 2.1A) occupy a very special place among the leukocytes that par-ticipate in one way or another in immune reactions due to their ability to interact specifi-cally with antigenic substances and to react to nonself antigenic determinants. Lympho-cytes differentiate from stem cells in the fetal liver, bone marrow, and thymus into two main functional classes. They are found in the peripheral blood and in all lymphoid tissues.

B lymphocytes or B cells are so designated because the bursa of Fabricius, a lym-phoid organ located close to the caudal end of the gut in birds, plays a key role in their differentiation. 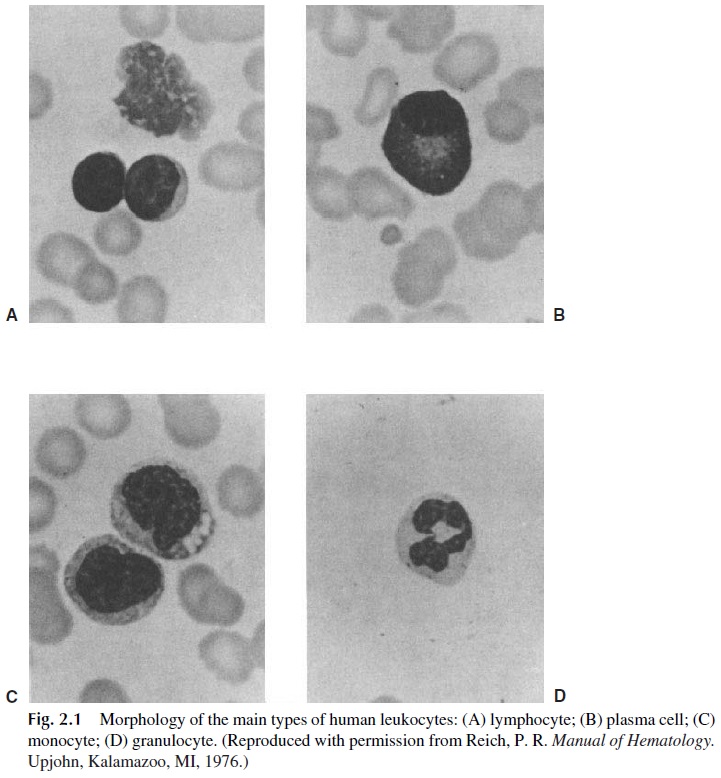 Removal of this organ, at or shortly before hatching, is associated with lack of differentiation, maturation of B lymphocytes, and the inability to produce antibodies. A mammalian counterpart to the avian bursa has not yet been found. Some investigators be-lieve that the bone marrow is the most likely organ for B-lymphocyte differentiation, while others propose that the peri-intestinal lymphoid tissues play this role.

B lymphocytes carry immunoglobulins on their cell membrane, which function as antigen receptors. After proper stimulation, B cells differentiate into antibody-producing cells (plasma cells). B lymphocytes can also play the role of antigen-presenting cells, which is usually attributed to cells of monocytic/macrophagic lineage.

T lymphocytes or T cells are so designated because the thymus plays a key role in their differentiation. The functions of the T lymphocytes include the regulation of immune responses and various effector functions (cytotoxicity and lymphokine production being the main ones) that are the basis of cell-mediated immunity (CMI). T lymphocytes also carry an antigen-recognition unit on their membranes, known as T-cell receptors. T-cell re-ceptors and immunoglobulin molecules are structurally unrelated.

Several subpopulations of T lymphocytes with separate functions have been recog-nized. The main two populations are the helper T lymphocytes, which are involved in the induction and regulation of immune responses, and the cytotoxic T lymphocytes, which are involved in the destruction of infected cells. It is also known that at specific stages of the immune response T lymphocytes can have suppressor functions, but the definition of a spe-cific population of regulatory cells continues to elude immunologists. Actually, to this date there are no known markers that allow one to distinguish T lymphocytes with different functions, although it is possible to differentiate cells with predominant helper function from those with predominant cytotoxic function.

T-cell–mediated cytotoxicity is a complex process involving several possible path-ways. Two of the pathways involve the release of proteins known as perforins, which in-sert themselves in the target cell membranes, forming channels. The formation of such channels may result in cell death by allowing diffusion of water into the hypertonic intra-cellular milieu, causing cellular swelling and eventually loss of integrity. On the other hand, the perforin channels also allow the diffusion of enzymes (granzymes, which are ser-ine esterases) into the cytoplasm. Once in the cytoplasm, granzymes induce apoptosis, the pathway of which is Ca2+ -dependent. Another pathway, which is Ca2+ -independent, can be easily demonstrated in knockout laboratory animals in which the perforin gene is inac-tivated or by carrying out killing experiments in buffers without Ca2+ . This second pro-apoptotic pathway requires cell-cell contact and depends on signals delivered by the cyto-toxic cell to the target cell, mediated by a molecule known as Fas and its respective ligand .

T lymphocytes have a longer lifespan than B lymphocytes. Long-lasting lympho-cytes are particularly important because of their involvement on immunological memory.

Upon recognizing an antigen and receiving additional signals from auxiliary cells, a small, resting T lymphocyte rapidly undergoes blastogenic transformation into a large lym-phocyte (13–15μm). This large lymphocyte (lymphoblast) then subdivides to produce an expanded population of medium (9–12μm) and small (5–8μm) lymphocytes with the same antigenic specificity.

Morphologically, NK cells are described as large granular lymphocytes. These cells do not carry antigen receptors of any kind but can recognize antibody molecules bound to target cells and destroy those cells using the same general mechanisms involved in T-lymphocyte cytotoxicity (antibody-dependent cellular cytotoxicity). They also have a recognition mechanism that allows them to destroy tumor cells and virus-infected cells.

Monocytes and macrophages are believed to be closely related. The monocyte (Fig. 2.1C) is considered a leukocyte in transit through the blood, which when fixed in a tissue will be-come a macrophage. Monocytes and macrophages, as well as granulocytes , are able to ingest particulate matter (microorganisms, cells, inert particles) and for this reason are said to have phagocytic functions. The phagocytic activity is greater in macrophages (particularly after activation by soluble mediators released during immune responses) than in monocytes.

Macrophages, monocytes, and related cells play an important role in the inductive stages of the immune response by processing complex antigens and concentrating antigen fragments on the cell membrane. In this form, the antigen is recognized by helper T lym-phocytes. For this reason, these cells are known as antigen-presenting cells (APC). APC include other cells sharing certain functional prop-erties with monocytes and macrophages present in skin (langerhans cells), kidney, brain (microglia), capillary walls, and lymphoid tissues. Langerhans cells can migrate to the lymph nodes, where they interact with T lymphocytes and assume the morphological char-acteristics of dendritic cells (Fig. 2.2). 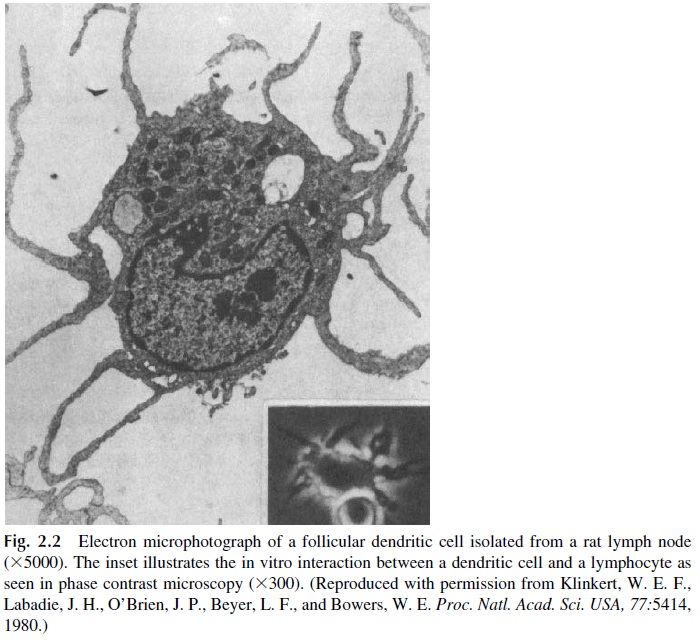 All antigen-presenting cells express one special class of histocompatibility antigens, designated as class II MHC or la (I region–associated) antigens . The ex-pression of MHC-II molecules is essential for the interaction with helper T lymphocytes. Antigen-presenting cells also release cytokines, which assist the proliferation of antigen-stimulated lymphocytes, including interleukins (IL)-1, -6, and -12.

Another type of monocyte-derived cell, the follicular dendritic cell, is present in the spleen and lymph nodes, particularly in follicles and germinal centers. This cell, apparently of monocytic lineage, is not phagocytic and does not express MHC-II molecules on the membrane, but it appears particularly suited to carry out the antigen-presenting function in relation to B lymphocytes. Follicular dendritic cells concentrate unprocessed antigen on the membrane and keep it there for relatively long periods of time, a factor that may be crucial for a sustained B-cell response. The follicular dendritic cells form a network in the germi-nal centers, known as the antigen-retaining reticulum.

Granulocytes are a collection of white blood cells with segmented or lobulated nuclei and granules in their cytoplasm, which are visible with special stains. Because of their seg-mented nuclei, which assume variable sizes and shapes, these cells are generically desig-nated as polymorphonuclear neutrophil leukocytes (PMN) (Fig. 2.1D). Different subpopu-lations of granulocytes (neutrophils, eosinophils, and basophils) can be distinguished by differential staining of the cytoplasmic granules, reflecting their different chemical consti-tution.

Neutrophils are the largest subpopulation of white blood cells and have two types of cytoplasmic granules containing compounds with bactericidal activity. Their biological im-portance derives from their phagocytic activity. Like most other phagocytic cells, they in-gest with greatest efficiency microorganisms and particulate matter coated by antibody and complement . However, nonimmunological mechanisms have also been shown to lead to phagocytosis by neutrophils, perhaps reflecting phylogenetically more primitive mechanisms of recognition.

Neutrophils are attracted by chemotactic factors to areas of inflammation. Those fac-tors may be released by microbes (particularly bacteria) or may be generated during com-plement activation as a consequence of an antigen-antibody reaction. The attraction of neu-trophils is especially intense in bacterial infections. Great numbers of neutrophils may die trying to eliminate the invading bacteria. Dead PMN and their debris become the primary component of pus, characteristic of many bacterial infections. Bacterial infections associ-ated with the formation of pus are designated as purulent.

Eosinophils are PMN with granules that stain orange-red with cytological stains con-taining eosin. These cells are found in high concentrations in allergic reactions and during parasitic infections;

Basophils have granules that stain metachromatically due to their contents of his-tamine and heparin. The tissue-fixed mast cells are very similar to basophils, even though they appear to evolve from different precursor cells. Both basophils and mast cells are in-volved in antiparasitic immune mechanisms and play key pathogenic roles in allergic reac-tions.