Because inhibition of voltage-gated Na channels from circulating local anesthetics might affect action potentials in neurons throughout the body as well as impulse generation and conduction in the heart, it is not surprising that local anesthetics in high cir-culating concentrations could have the propensity for systemic toxicity.

Because inhibition of voltage-gated Na channels from circulating local anesthetics might affect action potentials in neurons throughout the body as well as impulse generation and conduction in the heart, it is not surprising that local anesthetics in high cir-culating concentrations could have the propensity for systemic toxicity. Although organ system effects are discussed for these drugs as a group, individual drugs differ.

Potency at most toxic side effects correlates with potency at nerve blocks. Maximum safe doses are listed in Table 16–3, but it must be recognized that the maximum safe dose depends on the patient, the specific nerve block, the rate of injection, and a long list of other factors. In other words, tables of pur-ported maximal safe doses are nearly nonsensical. Mixtures of local anesthetics should be considered to have additive toxic effects; therefore, a solution containing 50% of the toxic dose of lidocaine and 50% of the toxic dose of bupivacaine if injected by accident intravenously will produce toxic effects. 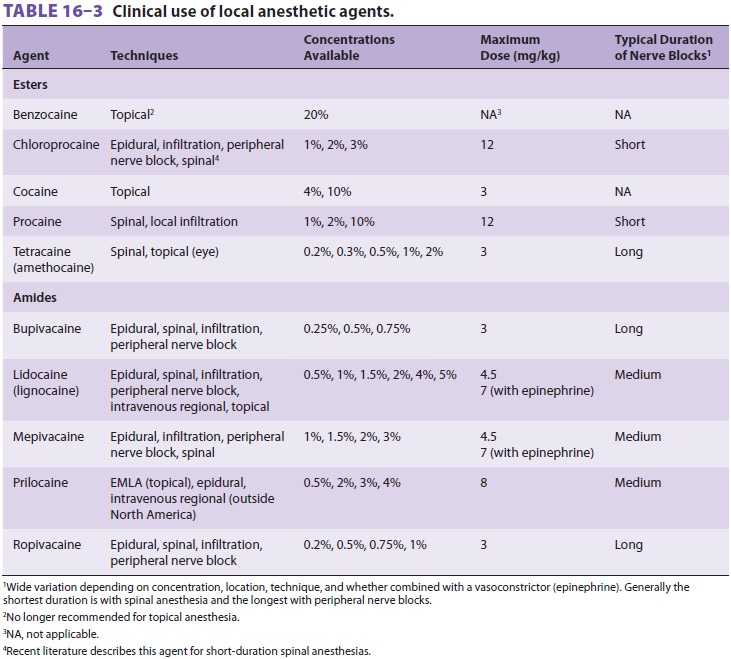 Infused local anesthetics have a variety of actions. Systemically administered local anesthetics such as lidocaine (1.5 mg/kg) can decrease cerebral blood flow and attenuate the rise in intracranial pressure that may accompany intubation in patients with decreased intracranial compliance. Infusions of lidocaine and procaine have been used to sup-plement general anesthetic techniques, as they are capable of reducing the MAC of volatile anesthetics by up to 40%. Infusions of lidocaine inhibit inflam-mation and reduce postoperative pain. Infused lido-caine reduces postoperative opioid requirements sufficiently to reduce length of stay after colorectal or open prostate surgery.Cocaine stimulates the central nervous system and at moderate doses usually causes a sense of euphoria. An overdose is heralded by restlessness, emesis, tremors, convulsions, arrhythmias, respira-tory failure, and cardiac arrest.

Local anesthetics temporarily inhibit neuro-nal function. In the past, unintentional injection of large volumes of chloroprocaine into the sub-arachnoid space (during attempts at epidural anesthesia), produced total spinal anesthesia and marked hypotension, and caused prolongedneurological deficits. The cause of this neural tox-icity may be direct neurotoxicity or a combination of the low pH of chloroprocaine and a preserva-tive, sodium bisulfite. The latter has been replaced in some formulations by an antioxidant, a deriva-tive of disodium ethylenediaminetetraacetic acid (EDTA). Chloroprocaine has also been occasion-ally associated with severe back pain following epidural administration. The etiology is unclear. Chloroprocaine is available in a preservative-free formulation, which has been used in recent studies safely and successfully for short duration, outpatient spinal anesthetics.

Administration of 5% lidocaine has been asso-ciated with neurotoxicity (cauda equina syndrome) following infusion through small-bore catheters used in continuous spinal anesthesia. This may be due to pooling of drug around the cauda equina, resulting in high concentrations and permanent neuronal damage. Animal data suggest that the extent of histological evidence of neurotoxicity fol-lowing repeat intrathecal injection is lidocaine = tetracaine > bupivacaine > ropivacaine.

Transient neurological symptoms, which con-sist of dysesthesia, burning pain, and aching in the lower extremities and buttocks, have been reported following spinal anesthesia with a variety of local anesthetic agents, most commonly after use of lidocaine for outpatient spinal anesthesia in men undergoing surgery in the lithotomy position. These symptoms have been attributed to radicular irrita-tion and typically resolve within 1–4 weeks. Many clinicians have substituted 2-chloroprocaine, mepi-vacaine, or small doses of bupivacaine for lidocaine in spinal anesthesia in the hope of avoiding these transient symptoms.

Lidocaine depresses hypoxic drive (the ventila-tory response to low PaO2). Apnea can result from phrenic and intercostal nerve paralysis or depres-sion of the medullary respiratory center following direct exposure to local anesthetic agents (as may occur after retrobulbar blocks;). Apnea after administration of a “high” spinal or epidural anesthetic is nearly always the result of hypotension, rather than phrenic block. Local anesthetics relax bronchial smooth muscle. Intravenous lidocaine (1.5 mg/kg) may be effective in blocking the reflex bronchoconstriction some-times associated with intubation. Lidocaine (or any other inhaled agent) administered as an aerosol can lead to bronchospasm in some patients with reac-tive airway disease.

Intravenous amiodarone provides effective treatment for some forms of ventricular arrhyth-mias. Myocardial contractility and arterial blood pressure are generally unaffected by the usual intravenous doses. The hypertension associated with laryngoscopy and intubation is attenuated in some patients by intravenous administration of lidocaine (1.5 mg/kg) 1–3 min prior to instrumen-tation. On the other hand, overdoses of lidocaine can lead to marked left ventricular contractile dysfunction.Unintentional intravascular injection of bupi-vacaine during regional anesthesia may produce severe cardiovascular toxicity, including left ventricular depression, atrioventricular heart block, and life-threatening arrhythmias such as ventricular tachycardia and fibrillation. Pregnancy, hypoxemia, and respiratory acidosis are predisposing risk fac-tors. Young children may also be at increased risk of toxicity. Multiple studies have demonstrated that bupivacaine is associated with more pronounced changes in conduction and a greater risk of terminal arrhythmias than comparable doses of lidocaine. Mepivacaine, ropivacaine, and bupivacaine have chiral carbons and therefore can exist in either of two optical isomers (enantiomers). The R(+) optical isomer of bupivacaine blocks more avidly and dis-sociates more slowly from cardiac Na channels than does the S(−) optical isomer. Resuscitation from bupivacaine-induced cardiac toxicity is often diffi-cult and resistant to standard resuscitation drugs. Recent reports suggest that bolus administration of nutritional lipid solutions at 1.5 mL/kg can resusci-tate bupivacaine-intoxicated patients who do not respond to standard therapy. Ropivacaine shares many physicochemical properties with bupivacaine. Onset time and duration of action are similar, but ropivacaine produces less motor block when injected at the same volume and concentration as bupiva-caine (which may reflect an overall lower potency as compared with bupivacaine). Ropivacaine appears to have a greater therapeutic index than bupivacaine. This improved safety profile likely reflects its formu-lation as a pure S(−) isomer—that is, having no R(+) isomer—as opposed to racemic bupivacaine. Levobupivacaine, the S(−) isomer of bupivacaine, which is no longer available in the United States, was reported to have fewer cardiovascular and cerebral side effects than the racemic mixture; studies sug-gest its cardiovascular effects may approximate those of ropivacaine.

Cocaine’s cardiovascular reactions are unlike those of any other local anesthetic. Adrenergic nerve terminals normally reabsorb norepineph-rine after its release. Cocaine inhibits this reup-take, thereby potentiating the effects of adrenergic stimulation. Cardiovascular responses to cocaine include hypertension and ventricular ectopy. The latter contraindicated its use in patients anesthetized with halothane. Cocaine-induced arrhythmias have been successfully treated with adrenergic and Ca channel antagonists. Cocaine produces vasocon-striction when applied topically and is a useful agent to reduce pain and epistaxis related to nasal intuba-tion in awake patients.

True hypersensitivity reactions to local anes-thetic agents—as distinct from systemic toxicity caused by excessive plasma concentration—are uncommon. Esters appear more likely to induce a true allergic reaction (due to IgG or IgE antibodies) especially if they are derivatives (eg, procaine or benzocaine) of p-aminobenzoic acid, a known allergen. Commercial multidose preparations of amides often contain methylparaben, which has a chemical structure vaguely similar to that of PABA. As a consequence, generations of anesthesiologists have speculated whether this preservative may be responsible for most of the apparent allergic responses to amide agents.