The following basic requirements are to be fulfilled for successful operation of the system:

The following basic requirements are to be fulfilled for successful operation of the system:

1. The generation must be adequate to meet all the load demand

2. The system frequency must be maintained within narrow and rigid limits.

3. The system voltage profile must be maintained within reasonable limits and

4.  In case of interconnected operation, the tie line power flows must be maintained at the specified values.

Ø        When real power balance between generation and demand is achieved the frequency specification is automatically satisfied.

Ø        Similarly, with a balance between reactive power generation and demand, voltage profile is also maintained within the prescribed limits.

Ø        Any difference is immediately indicated by a change in speed or frequency.

Ø        Generators are fitted with speed governors which will have varying characteristics: different sensitivities, dead bands response times and droops.

   They adjust the input  to  match  the  demand  within  their  limits.

Ø        Any change in local demand within permissible limits is absorbed by generators in the system in a random fashion.

Ø        An independent aim of the automatic generation control is to reschedule the generation changes to preselected machines in the system after the governors have accommodated the load change in a random manner.

Ø        Thus, additional or supplementary regulation devices are needed along with governors for proper regulation.

Ø        The control of generation in this manner is termed load-frequency control.

Ø        For interconnected operation, the last of the four requirements mentioned earlier is fulfilled by deriving an error signal from the deviations in the specified tie-line power flows to the neighboring utilities and adding this signal to the control signal of the load-frequency control system.

Ø        Should the generation be not adequate to balance the load demand, it is imperative

Ø        that one of the following alternatives be considered for keeping the system in operating condition:

2. Load shedding for unimportant loads, and

It is apparent from the above that since the voltage specifications are not stringent. Load frequency control is by far the most important in power system control. 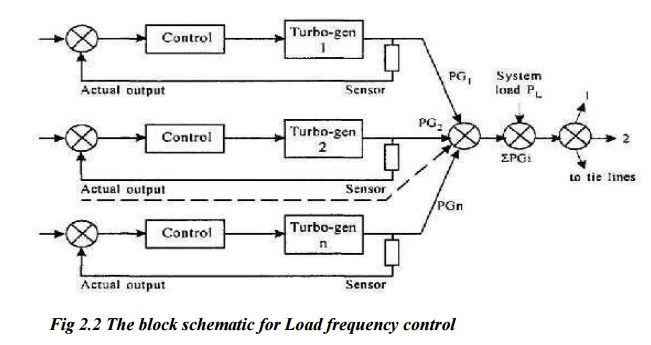 In order to understand the mechanism of frequency control, consider a small step increase in load. The initial distribution of the load increment is determined by the system impedance; and the instantaneous relative generator rotor positions. The energy required to supply the load increment is drawn from the kinetic energy of the rotating machines. As a result, the system frequency drops. The distribution of load during this period among the various machines is determined by the inertias of the rotors of the generators partaking in the process. This problem is studied in stability analysis of the system.

After the speed or frequency fall due to reduction in stored energy in the rotors has taken place, the drop is sensed by the governors and they divide the load increment between the machines as determined by the droops of the respective governor characteristics. Subsequently, secondary control restores the system frequency to its normal value by readjusting the governor characteristics.