LFC Control of Single Area and Derive the Steady State

The generator is synchronized to a network of very large size. So, the speed or frequency will be essentially independent of any changes in a power output of the generator ie, ∆F(s) =0

LFC  CONTROL  OF  SINGLE  AREA  AND  DERIVE THE  STEADY  STATE

The generator is synchronized to a network of very large size. So, the speed or frequency will be essentially independent of any changes in a power output of the generator

To find the resulting steady change in the generator output:

Let us assume that we made a step change of the magnitude ∆Pc of the speed changer For step change, ∆Pc(s) = ∆Pc/s

Let us assume that the load suddenly increases by small amount ∆PD.

Consider there is no external work and the generator is delivering a power to a single load.

In  the steady state, the  ALFC  is in  „open‟ state, and the output is obtained by substituting s→0 in the TF.

Ø     It  achieves the primary goal of real power balance by adjusting the turbine output ∆Pm to match the change  in       load  demand ∆PD.

Ø   All the participating generating units contribute to the change in generation. But a change in load results in a steady state frequency deviation ∆f.

Ø   The restoration of the frequency to the nominal value requires an additional control loop called the supplementary loop.

Ø   This objective is met by using integral controller which makes the frequency deviation zero.

Ø   The ALFC with the supplementary loop is generally called the AGC. The block diagram of an AGC is shown in Fig.

Ø   The main objectives  of AGC a r e

i)  to  regulate  the  frequency  (using  both  primary  and  supplementary  controls);

A  secondary objective of  the AGC is  to distribute the  required change in generation among the connected generating units economically (to obtain least operating costs). 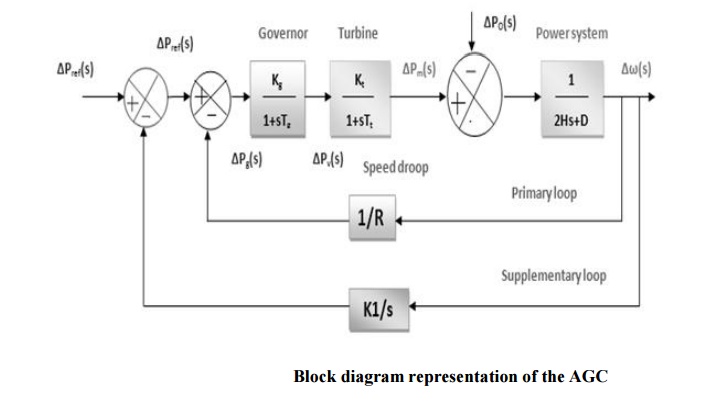 AGC in a Single Area System

 In a single area system, there is no tie-line schedule to be maintained.

 Thus the function of the AGC is only to bring the frequency to the nominal value.

 This will be achieved using the supplementary loop (as shown in Fig.) which uses the integral controller to change the reference power setting so as to change the speed set point.

 The integral controller gain KI n e e d s to be adjusted for satisfactory response (in terms of overshoot, settling time) of the system.