Listeria monocytogenes is a Gram-positive rod with some bacteriologic features that re-semble those of both corynebacteria and streptococci.

Listeria monocytogenes is a Gram-positive rod with some bacteriologic features that re-semble those of both corynebacteria and streptococci. In stained smears of clinical and laboratory material, the organisms resemble diphtheroids. Listeria are not difficult to grow in culture, producing small, β-hemolytic colonies on blood agar. This species is able to grow slowly in the cold even at temperatures as low as 1°C. Listeria species are cata-lase positive, which distinguishes them from streptococci, and produce a characteristic tumbling motility in fluid media at 25°C that distinguishes them from corynebacteria.

Eleven L. monocytogenes serotypes are recognized based on flagellar and somatic sur-face antigens, but the majority of human cases are limited to only three serotypes (1/2a, 1/2b, 4b). These serotypes differ from other Listeria in elements of the chemical teichoic acid composition, a major component of their cell wall. The teichoic acid of serotype 4b, which accounts for almost all food-borne listeriosis outbreaks, is distinctive in that there are both galactose and glucose substituents in its N-acetylglucosamine.

Listeria monocytogenes is a Gram-positive rod with some bacteriologic features that re-semble those of both corynebacteria and streptococci. In stained smears of clinical and laboratory material, the organisms resemble diphtheroids. Listeria are not difficult to grow in culture, producing small, β-hemolytic colonies on blood agar. This species is able to grow slowly in the cold even at temperatures as low as 1°C. Listeria species are cata-lase positive, which distinguishes them from streptococci, and produce a characteristic tumbling motility in fluid media at 25°C that distinguishes them from corynebacteria.

Members of Listeria are widespread among animals in nature, including those associated with our food supply (eg, fowl, ungulates). The human reservoir appears to be intestinal colonization, which various studies have shown to range from 2 to 12%. The importance of  food-borne  transmission  of  listeriosis  was  not  recognized  until  the  early  1980s. A widely publicized 1985 California outbreak involved consumption of Mexican-style soft cheese and included 86 cases and 29 deaths. Most of the cases were among mother – infant pairs. Dairy product outbreaks have been traced to post-pasteurization contamination or deviation from recommended time and temperature guidelines. An important feature of some epidemics has been the ability of L. monocytogenes to grow at refrigerator tempera-tures, allowing scant numbers to reach an infectious dose during storage. Heightened awareness has implicated many other foodstuffs, particularly those prepared from animal products in a ready-to-eat form such as sausages and delicatessen poultry items.

L. monocytogenes may also be transmitted transplacentally to the fetus, presumablyfollowing hematogenous dissemination in the mother. It may also be transmitted to new-borns in the birth canal in a manner similar to group B streptococci. Listeriosis is still not a reportable disease in the United States, but active surveillance studies indicate that it may account for more than 1000 cases and 200 deaths each year. Most cases occur at the extremes of life (eg, in infants less than 1 month of age or adults over 60 years of age).

L. monocytogenes animal models have long been used for the study of cell-mediated immu-nity because of the ability of the organism to grow in nonimmune macrophages. An activated macrophage is needed to clear the infection, and in fact the concept of the activated macrophage that appears throughout this book owes much to the study of experimental Liste-ria infection. More recently, Listeria has generated great interest because of the mechanismsit uses to invade and survive in macrophages and efficiently spread among epithelial cells.

The first step in this process takes place when L. monocytogenes attaches to and is inter-nalized into nonprofessional and professional phagocytes. These include enterocytes, fibroblasts, dendritic cells, hepatocytes, endothelial cells, M cells, and macrophages. Under the influence of a surface protein called internalin,Listeria causes a local reorganization of the cytoskeleton of the cell and stimulates its own entry in a membrane-bound vacuole. The invading bacteria rapidly escape into the host cell cytosol by elaborating listeriolysin O (LLO), which acts in a manner similar to streptolysin O and other pore-forming cytotoxins.

Once in the cytosol, L. monocytogenes continues to move through the cell by control-ling the metabolism of the cell’s actin filaments. This process is stimulated by other sur-face proteins (ActA, gelsolin), which control the actin polymerization so that actin monomers are sequentially concentrated directly behind the bacterium. The net effect is the appearance of a bacterial “tail” that is connected to the long actin filaments. The addi-tion of new actin units to the tail propels the organisms through the cytosol like a comet through the evening sky (Fig 18 – 2). The motile Listeria eventually reach the edge of the cell where, instead of stopping, they protrude into the adjacent cell taking the original cell membrane along with them. When these pinch off, the organisms are surrounded by a double set of host cell membranes that are dissolved by LLO and phospholipases, releas-ing the organisms to start the cycle again. 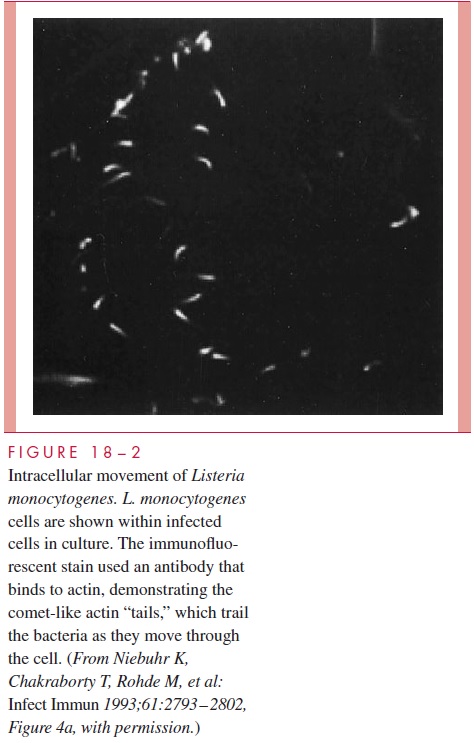 This complex strategy allows L. monocytogenes to survive in macrophages by escap-ing the phagosome, and then to spread from epithelial cell to epithelial cell without expo-sure to the immune system. How does Listeria keeps its LLO from destroying the host cell membrane from the inside as the pore-forming toxins of other bacteria do from the outside? It appears that L. monocytogenes may be able to not only regulate the timely production of LLO but also to trigger its degradation by host cell proteolytic enzymes af-ter it has left the endosome vacuole. LLO and several other genes, including those involved in actin rearrangement, are all part of a virulence regulon. The result is a surgi-cally precise deployment of virulence factors.

Immunity to Listeria infection owes little to humoral and much to cell-mediated mecha-nisms. The generation of antigen-specific CD4+ and CD8+ T-cell subsets is required for the resolution of infection and the establishment of long-lived protection. Neutrophils play a role in early stages by lysing Listeria infected cells, but it is cytokine-activation that reverses the intracellular growth in macrophages. The importance of cellular immu-nity is emphasized by the increased frequency of listeriosis in those with its compromise due to disease such as acquired immunodeficiency syndrome (AIDS), immunosuppres-sive therapy, age, or pregnancy.