C. diphtheriae are differentiated from other corynebacteria by the appearance of colonieson the selective media used for its isolation and a variety of biochemical reactions.

C. diphtheriae produces a powerful exotoxin that is responsible for diphtheria. Other  corynebacteria are nonpathogenic commensal inhabitants of the pharynx, nasopharynx, distal urethra, and skin; they are collectively referred to as “diphtheroids.” The species that have disease associations are included in Table 18 – 2. 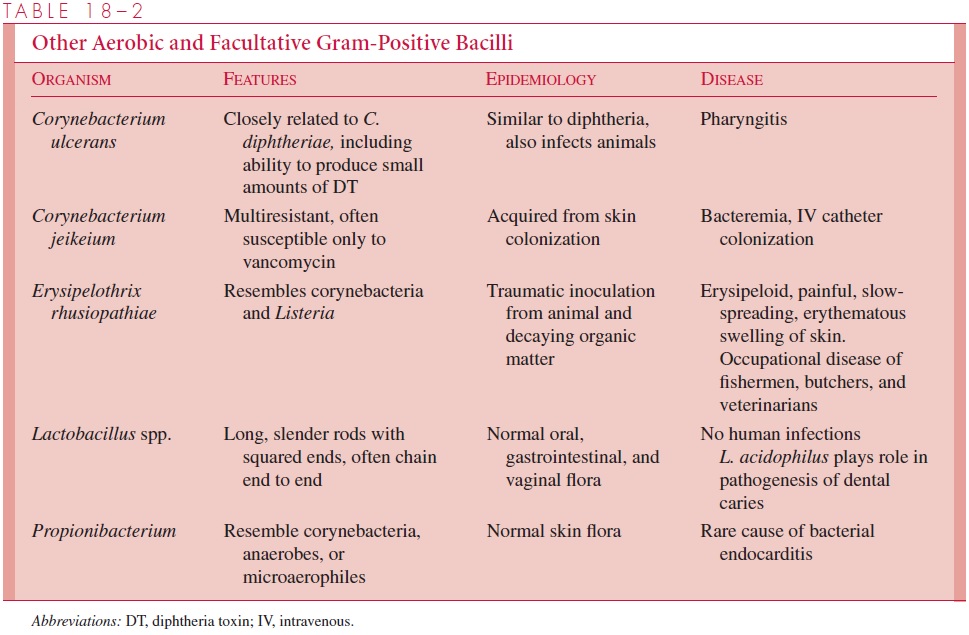 C. diphtheriae are differentiated from other corynebacteria by the appearance of colonieson the selective media used for its isolation and a variety of biochemical reactions. Strains of C. diphtheriae may or may not produce diphtheria toxin (DT). Those that do have the structural gene for DT acquired from the genome of a specific bacteriophage. Only strains that are lysogenic for these phages produce toxin. 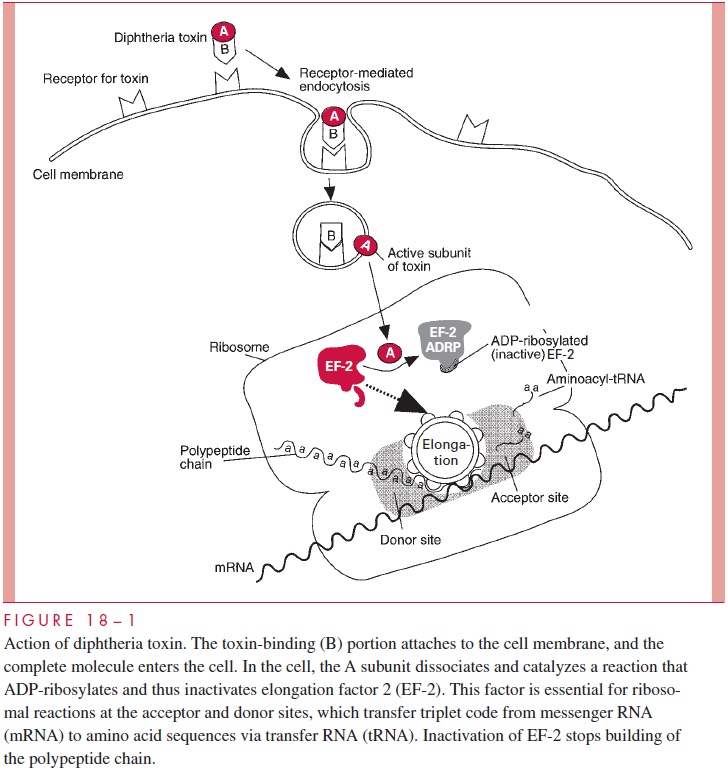 DT is an A-B toxin that acts in the cytoplasm to inhibit protein synthesis irre-versibly in a wide variety of eukaryotic cells (Fig 18 – 1). After binding mediated by the B subunit, both the A and B subunits enter the cell in a endocytotic vacuole. In the low pH of the vacuole, the toxin unfolds exposing sites that facilitate translocation of the A subunit from the phagosome to the cytosol. Separation is required for full activity of the A subunit on its target protein elongation factor 2 (EF-2), which transfers polypep-tidyl-transfer RNA from acceptor to donor sites on the ribosome of the host cell. The specific action of the A subunit is to catalyze the transfer of the adenine ribose phos-phate portion of nicotinamide adenine dinucleotide (NAD) to EF-2, an enzymatic reac-tion called ADP-ribosylation. This inactivates EF-2 and shuts off protein synthesis. The ADP-ribosylation leaves the toxin itself free to catalyze another reaction, making it possible for a single DT molecule to inhibit protein synthesis in a cell within a few hours. ADP-ribosylation is now known to be the enzymatic mechanism of action for a number of toxins including those that act on EF-2 (DT, Pseudomonas aeruginosaexo-toxin A) and those with other target proteins (cholera toxin, Escherichia coli LT, pertus-sis toxin). C. diphtheriae itself is unaffected because it uses a protein other than EF-2 in protein synthesis.

Diphtheria is a disease caused by the local and systemic effects of diphtheria toxin, a potent inhibitor of protein synthesis. The local disease is a severe pharyn-gitis typically accompanied by a plaquelike pseudomembrane in the throat and trachea. The life-threatening aspects of diphtheria are due to the absorption of the toxin across the pharyngeal mucosa and its circulation in the bloodstream. Multiple organs are affected, but the most important is the heart, where the toxin produces an acute myocarditis.

C. diphtheriae is transmitted by droplet spread, by direct contact with cutaneous infec-tions, and, to a lesser extent, by fomites. Some subjects become convalescent pharyngeal or nasal carriers and continue to harbor the organism for weeks to months or even for a lifetime. Diphtheria is rare where immunization is widely used. In the United States, for example, fewer than 10 cases are now reported each year. These usually occur as small outbreaks in populations that have not received adequate immunization, such as migrant workers, transients, and those who refuse immunization on religious grounds. It has been more than 20 years since any outbreak exceeded 50 cases.

Diphtheria still occurs in developing countries and in those places where public health in-frastructure has been disrupted. For example, in the former Soviet Union, where the annual number of diphtheria cases had been below 200, over 47,000 cases and 1700 deaths occurred between 1990 and 1995. This outbreak followed the introduction of diphtheria into a popula-tion where the immunization rate for children was not sufficiently high, adults were not given boosters, and the efforts at mass immunization early in the epidemic were inadequate.

C. diphtheriae has little invasive capacity, and diphtheria is due to the local and systemiceffects of DT, a protein exotoxin with potent cytotoxic features. It inhibits protein synthe-sis in cell-free extracts of virtually all eukaryotic cells, from protozoa and yeasts to higher plants and humans. Its toxicity for intact cells varies among mammals and organs, pri-marily as a result of differences in toxin binding and uptake. In humans the B subunit binds to one of a common family of eukaryotic receptors that regulate cell growth and differentiation, thus exploiting a normal cell function.

The production of DT has both local and systemic effects. Locally, its action on ep-ithelial cells leads to necrosis and inflammation, forming a pseudomembrane composed of a coagulum of fibrin, leukocytes, and cellular debris. The extent of the pseudomem-brane varies from a local plaque to an extensive covering of much of the tracheobronchial tree. Absorption and circulation of DT allows binding throughout the body. Myocardial cells are most affected; eventually, acute myocarditis develops.

The DT tox gene is regulated by a repressor protein (DtxR) in response to iron limita-tion. Toxin biosynthesis is greatest when the bacteria are grown at low iron concentra-tions. Iron seems to play a central role in the expression of virulence; the repressor also regulates a corynebacterial siderophore system and a number of other proteins. Nontoxi-genic strains of C. diphtheriae can produce pharyngitis, but not the toxic manifestations of diphtheria. They can be converted to toxigenicity by lysogenization in vitro with phage, and this process can probably occur in vivo.

Diphtheria toxin is antigenic, stimulating the production of protective antitoxin antibodies during natural infection. Formalin treatment of toxin produces toxoid, which retains the anti-genicity but not the toxicity of native toxin and is used in immunization against the disease. It is clear that this process functionally inactivates fragment B. Whether it also inactivates frag-ment A or prevents its ability to dissociate from fragment B is not known. Molecular studies of the A subunit structure and action suggest that another approach to immunization may be through genetic engineering. For example, substitution of a single amino acid located in the NAD-binding site of the A subunit of DT can completely detoxify but retain the immuno-genic specificity of the toxin. The membrane-translocation properties of the B subunit have also been used to transport other proteins into the cytosol by linking them to DT.