To reduce the complexity of getting all the functions maintained by one a new technique called layering technology was introduced. In this, the architecture contains several layers and each layer is responsible for certain functions. The general idea is that the services offered by underlying hardware, and then add a sequence of layers, each providing a higher level of service. The services provided at the higher layers are implemented in terms of the services provided by the lower layers. A simple network has two layers of abstraction sandwiched between the application program and the underlying hardware.

The layer immediately above the hardware in this case might provide host to host connectivity, and the layer above it builds on the available host to host communication service and provides support for process to process channels.

Features of layering are: 1. It decomposes the problem of building a network into more manageable components. 2. It provides a more modular design. Addition of new services and modifications are easy to implement.

In process to process channels, they have two types of channels. One for reque st\reply service and the other for messag e stream service. 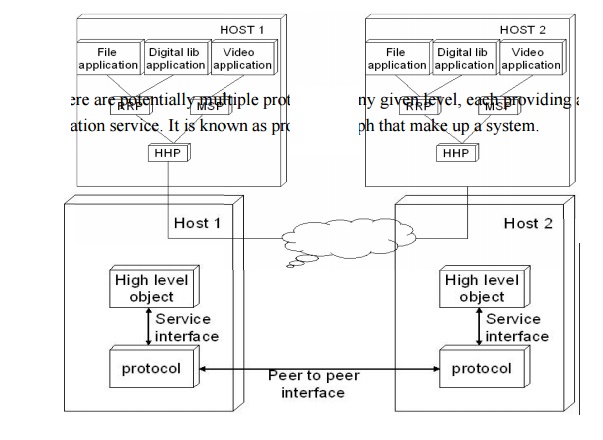 There are potentially multiple protocols at any given level, each providing a different communication service. It is known as protocol graph that make up a system.

ISO refers International Standards Organization was established in 1947, it is a multinational body dedicated to worldwide agreement on international standards.

OSI refers to Open System Interconnection that covers all aspects of network communication. It is a standard of ISO.

Here open system is a model that allows any two different systems to communicate regardless of their underlying architecture. Mainly, it is not a protocol it is just a model.

The open system interconnection model is a layered framework. It has seven separate but interrelated layers. Each layer having unique responsibilities.

The figure shown below shows the layers involved when a message sent from A to B pass through some intermediate devices.

Both the devices A and B are formed by the framed architecture. And the intermediate nodes only having the layers are physical, Datalink and network. In every device each layer gets the services from the layer just below to it. When the device is connected to some other device the layer of one device communicates with the corresponding layer of another device. This is known as peer to peer process.

Each layer is connected with the next layer by using interfaces. Each interface defines what information and services a layer must provide for the layer above it. 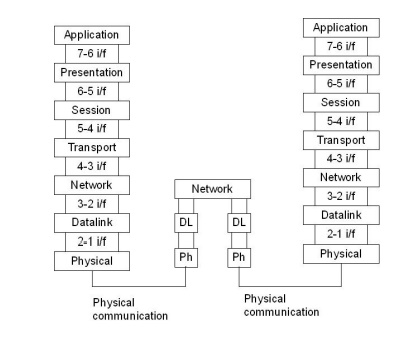 The seven layers are arranged by three sub groups.

Physical, Datalink and Network layers come under the group. They deal with the physical aspects of the data such as electrical specifications, physical connections, physical addressing, and transport timing and reliability.

Session, Presentation and Application layers comes under the group. They deal with the interoperability between the software systems.

The transport layer is the intermediate layer between the network support and the user support layers.

FUNCTIONS OF THE LAYERS

The physical layer coordinates the functions required to transmit a bit stream over a physical medium. It deals with the mechanical and electrical specifications of the interface and the transmission medium. 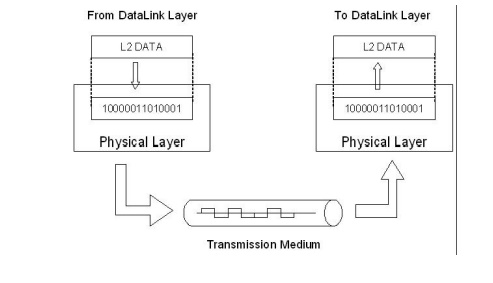 1.  Physical Characteristics Of Interfaces and Media:

       It defines the electrical and mechanical characteristics of the interface and the media.

   It defines the types of transmission medium

   To transmit the stream of bits they must be encoded into signal. 

   It defines the type of encoding weather electrical or optical. 

   It defines the transmission rate i.e. the number of bits sent per second. 

   The sender and receiver must be synchronized at bit level. 

   It defines the type of connection between the devices. 

   It defines how devices are connected to make a network. 

It defines the direction of transmission between devices.

Three types of transmission are,

The responsibilities of Datalink layer are,

   It adds a header that defines the physical address of the sender and the receiver.

   If the sender and the receiver are in different networks, then the receiver address is the address of the device which connects the two networks.

   It imposes a flow control mechanism used to ensure the data rate at the sender and the receiver should be same.

*       To improve the reliability the Datalink layer adds a trailer which contains the error control mechanism like CRC, Checksum etc.

*       When two or more devices connected at the same link, then the Datalink layer used to determine which device has control over the link at any given time.

When the sender is in one network and the receiver is in some other network then the network layer has the responsibility for the source to destination delivery.

*       If a packet passes the network boundary that is when the sender and receiver are places in different network then the network layer adds a header that defines the logical address of the devices.

*   When more than one networks connected and to form an internetwork, the

connecting devices route the packet to its final destination.

The network layer is responsible for the end to end delivery of the entire message. It ensures that the whole message arrives in order and intact. It ensures the error control and flow control at source to destination level. 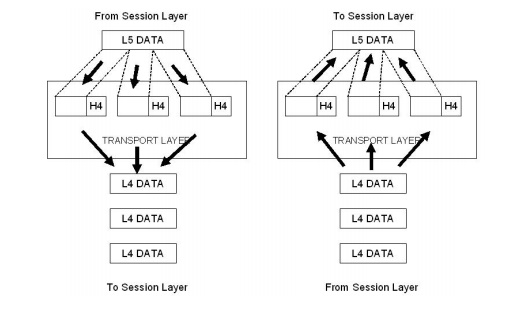    A single computer can often run several programs at the same time.

   The transport layer gets the entire message to the correct process on that computer.

   It adds a header that defines the port address which used to identify the exact process on the receiver.

   A message is divided into manageable units called as segments.

   Each  segment  is  reassembled  after  received  that  information  at  the receiver end.

   To make this efficient each segment contains a sequence number.

   The transport layer creates a connection between the two end ports.

*   It involves three steps. They are,

Flow control is performed at end to end level

It acts as a dialog controller. It establishes, maintains and synchronizes the interaction between the communication devices.

   The session layer allows two systems to enter into a dialog. 

   It allows the communication between the devices. 

It adds a synchronization points into a stream of bits.

The presentation layer is responsible for the semantics and the syntax of the information exchanged.

*   The presentation layer is responsible for interoperability between different

*   To ensure security encryption/decryption is used

*        Encryption means transforms the original information to another form

*   Decryption means retrieve the original information from the encrypted

The application la yer enables the user to access the network. It provides interfaces between the users to the network.

       It is a software v ersion of a physical terminal and allows a us er to log on to a remote host.

       It provides the ba sis for e-mail forwarding and storage. 

       It provides distri buted database sources and access for global i nformation about various objects an d services.