The change of motion is proportional to the imposed driving force and occurs along a straight line in which the force acts.

To every action there is always an equal reaction: or the mutual interactions of two bodies are always equal but directed contrary.

It states that, “If there forces acting at a point are in equilibrium, each force will be proportional to the sine of the angle between the other two forces.”

Suppose the three forces P, Q and Rare acting at a point 0 and they are in equilibrium as shown in Fig. 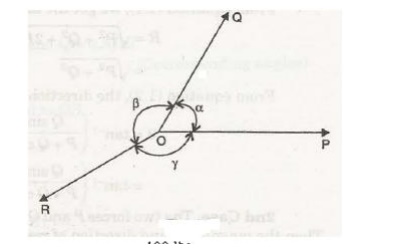 Then according to Lame’s theorem, P is proportional sine of angle between Q and R a sin β. P / sin β = constant.

Example-1: In a jib crane, the jib and the tie rod are 5 m and 4 m long resp ectively. the height of crane post in 3 m and the ti es red remains horizontal. Determine the for ces produced in jib and tie rod when a load of 2 kn in suspended at the crane head.

Let P1 and P2 be the forces developed in jib and tie rod respectively. the three forces P1, P2 and W are shown in figure with the angle between the forces calculated from the given directions. The line of action of forces P1, P2 and weigh W meet at the point C, and therefore Lami’s theorem is

The –ve sign indicates that the direction of force P1 is opposite to that shown in figure obviously the tie rod will be under tension and jib will in compression.

Examples-2: A string ABCD w hose extremity A is fixed has weights W1 and W2 attached to it at B and C, and passes round a smooth peg at D carrying a weight of 800 N at the free end E shown in Figure. If in a state of equilibrium, BC is horizontal and AB and CD make angles of 150o and 120o respectively wit h BC, make calculation for (a) The tension i n portion AB, BC, CD and DE of the string. (b) t he value of weights W1 and W2 (c) The load o n the peg at D

Applying Lami’s theorem at point B,

Let two forces P and Q act at a point 0 as shown in Fig. 1.3. The force P is represented in magnitude

In parallelogram OACB, AC is parallel and equal to OB .

Then from triangle OCD, 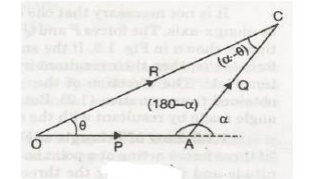 1st Case. If the two forces P and Q act at right angles, then a = 90° we get the m agnitude of resultant as

2nd Case. The two forces P and Q are equal and are acting at an angle a betwee n them. Then the magnitude and direction of resul tant is given as

It states that, “if three fo rces acting at a point be represented in magnitude and direction by the three sides of a triangle, take n in order, they will be in equilibrium.” 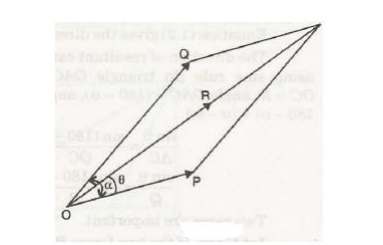 A force can be represented as a vector. Forces and vectors share three major characteristics: 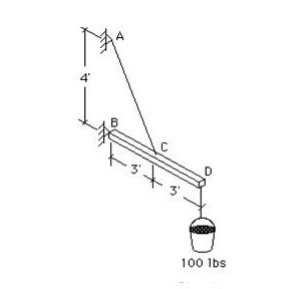 The simple support structure in Figure can be used to illustrate the three characteristics that make a force equivalent to a vector.

There are two ways in which forces can be represented in written form:

3. The method used depends on the type of problem being solved and the easiest approach to finding a solution. 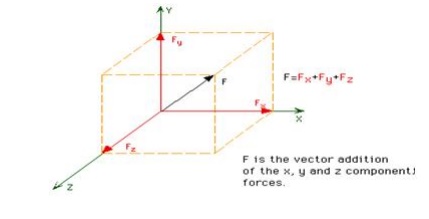 Scalar notation is useful when describing a force as a set of orthogonal force components. For example: Fx = 15N, Fy = 20N, Fz = 10N. 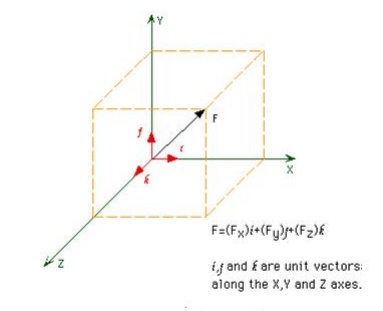 The N term represents the unit of force, Newtons in this instance.

Multiple forces can be applied at a point. These forces are known as concurrent forces and can be added together to form a resultant force. If the component forces are orthogonal, then the magnitude of the resultant force can be determined by taking the Square Root of the Sum of the Squares (SRSS). The SRSS method is an extension of the Pythagorean Theorem to three dimensions. 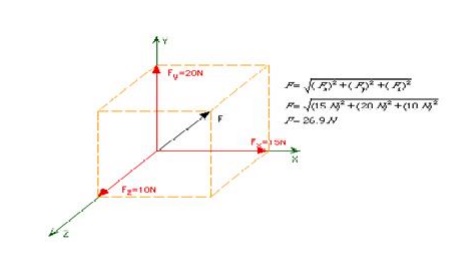 Sometimes it is useful t o know how much of a force is acting in a dire ction other than the X,Y,or Z direction. Such a case might involve a bolted connection with a slotted hole, as shown in Figure. 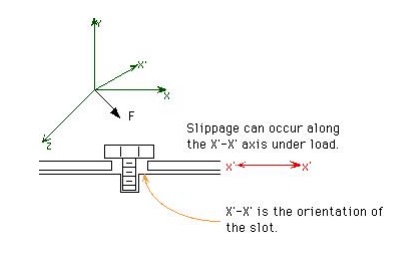 Suppose that the force i n Figure 1.5.1 was F=40i + 10j + 30kNewtons, and that the X' axis was oriented along the unit vect or e=0.6i + 0.5j - 0.624k. The projection of F onto X' would be the force component acting in the direction of the slot. Now consider the possibility that the connection would slip if Fx' was greater th an 35 N. Will the connection slip? The dot p roduct will help us answer this question. 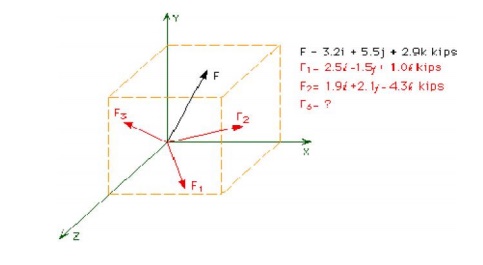 These requirements are necessary and sufficient conditions.

Let us understand equation for different type of force systems.

In this system, line of action of forces act along the same line is called collinear forces. For example consider a rope is being pulled by two players as shown in figure F1 F2

A concurrent force system contains forces whose lines-of action meet at same one point. Forces may be tensile (pulling) or Forces may be compressive (pushing)

A system of forces acting on the same plane but whose line of action does not pass through the same point is known as non concurrent coplanar forces or system for example a ladder resting against a wall and a man is standing on the rung but not on the center of gravity.

In this case all the forces are parallel to each other but not in the same plane,for example the force acting on the table when a book is kept on it. 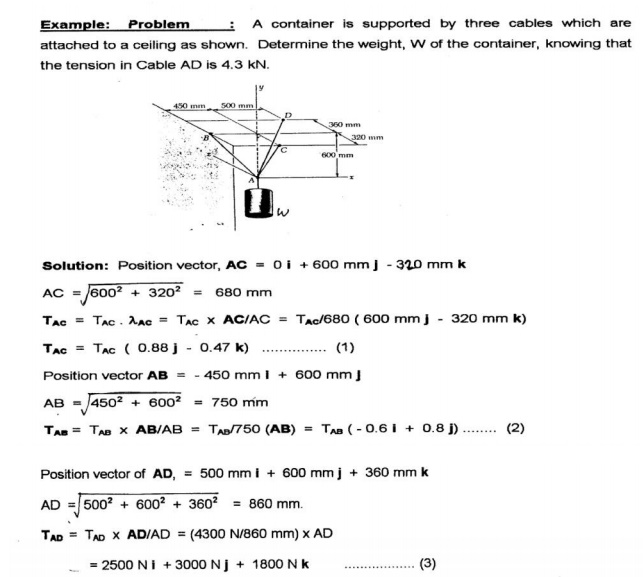 The resultant, R of two o r more forces in space is obtained by summing their rectangular components i.e.

12 Equilibrium of a particl e in space

(Newton’s first law is that a bod y at rest is not subjected to any unbalanced force s). 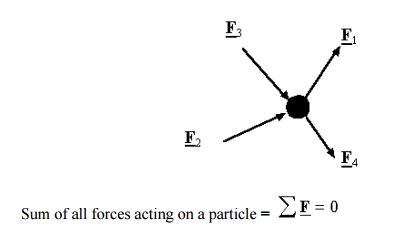 To apply equilibrium equations we must account for all known and unknown forces acting on the particle. The best way to do this is to draw a free-body diagram of the particle.

If a force, acting at a point on a rigid body, is shifted to any other point which is on the line of action of the force, the external effect of the force on the body remains unchanged".

When a number of forces are acting on a rigid body, then these forces can be replaced by a single force which has. the same effect on the rigid body as that of all the forces acting together, then this single, force is known as 'Single Equivalent Force'. This single equivalent force is also known as resultant of several forces. Hence a single force which can replace a number of forces acting on a rigid body, without causing any change in external effects on the body, is known as single equivalent force (or resultant force )