The magnetic lines of force produced by a magnet is called magnetic flux. It is denoted by ϕ and its unit is Weber.

This is also known as field intensity, magnetic intensity or magnetic field, and is represented by the letter H. Its unit is ampere turns per metre.

The total number of lines of force per square metre of the cross-sectional area of the magnetic core is called flux density, and is represented by the symbol B. Its SI unit (in the MKS system) is testa (weber per metre square).

A - area of the core in square metres

B - flux density in weber/metre square.

The amount of flux density setup in the core is dependent upon five factors - the current, number of turns, material of the magnetic core, length of core and the cross-sectional area of the core. More current and the more turns of wire we use, the greater will be the magnetizing effect. We call this product of the turns and current the magneto motive force (mmf), similar to the electromotive force (ernf).

Where mmf  is the magneto motive force in ampere turns

N is the number of turns, A.

In the magnetic circuit there is something analogous to electrical resistance, and is called reluctance, (symbol S). The total flux is inversely proportional to the reluctance and so if we denote mmf by ampere turns. we can write

= Reciprocal of absolute permeability of material

I - length of the magnetic path in meters

It is the magnetism which remains in a material when the effective magnetizing force has been reduced to zero.

The limit beyond which the strength of a magnet cannot be increased is called magnetic saturation.

When an emf is induced in a circuit electromagnetically the current set up always opposes the motion or change in current which produces it.

Electromagnetic induction means the electricity induced by the magnetic field

There are two laws of Faraday's laws of electromagnetic induction. They are,

Whenever a conductor cuts the magnetic flux lines an emf is induced in the conductor.

The magnitude of the induced emf is equal to the rate of change of flux-linkages. 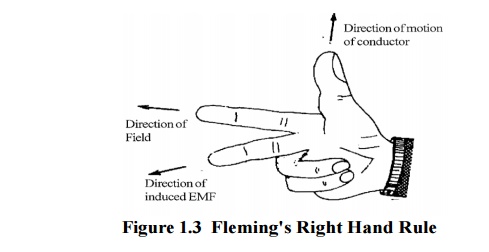