CSF and blood are the specimens of choice for the diagnosis of meningitis. One to two milliliters of CSF is usually collected from the patients for performing various tests.

CSF and blood are the specimens of choice for the diagnosis of meningitis. One to two milliliters of CSF is usually collected from the patients for performing various tests. In meningitis, the CSF shows pleocytosis (mean 4000–5000 WBC/mL) with a predominance of neutrophils. It shows decreased CSF glucose level and elevated CSF protein.

Blood is a frequently used specimen for culture for diagno-sis of cellulitis, epiglottitis, arthritis, or pneumonia caused by Hib. Throat swab, pus, and aspirates from joints, middle ear, and sinuses are the other specimens collected depending on the lesions caused by H. influenzae.

Gram-staining smear of the CSF shows small, Gram-negative coccobacilli in more than 80% of the CSF from cases of untreated meningitis (Fig. 38-3). Gram-stained smear is also useful as a rapid diagnostic method for demonstration of H. influenzae in lower respiratory tract disease and arthritis. 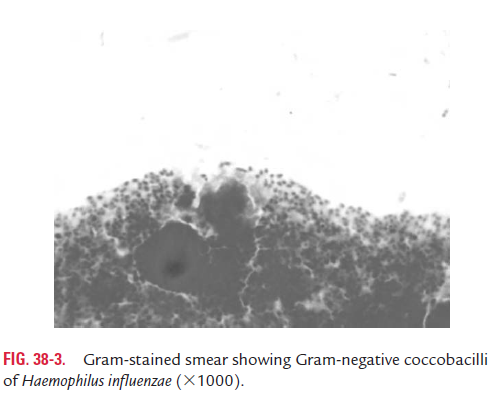 The colonies are identified by: 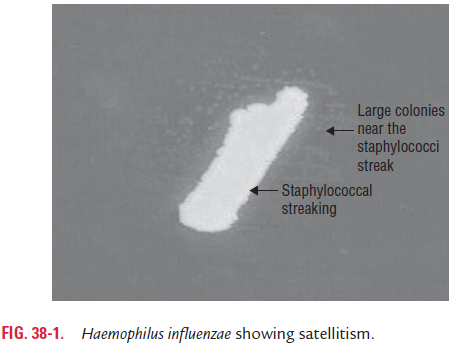 The serotyping of encapsulated H. influenzae is carried out by several methods including agglutination reaction, Quellung reaction, coagglutination, enzyme-linked immunosorbent assay (ELISA) methods, and recently by using a DNA probe.

Quellung reaction is carried out by using antisera pre-pared against type-specific polysaccharide. Fresh isolates from infected patients or primary isolates can be typed by this method. DNA probe is used currently for typing encapsulated H. influenzae. The probe hybridizes with a fragment to chro-mosomal DNA, which codes for the production of capsular antigen. However, noncapsulated strains cannot be typed, hence are called nontypable strains.

Latex agglutination (LAT), co-agglutination (Co-A), counter-current immunoelectrophoresis (CIEP), and ELISA are the tests that can be used to detect polysaccharide antigen b in body fluids.