A unique feature of laboratory testing in microbiology is that the susceptibility of the iso-late of an individual patient can be tested against a battery of potential antimicrobics.

A unique feature of laboratory testing in microbiology is that the susceptibility of the iso-late of an individual patient can be tested against a battery of potential antimicrobics. These tests are built around the common theme of placing the organism in the presence of varying concentrations of the antimicrobic in order to determine the MIC. The methods used are standardized, including a measured inoculum of the bacteria and the growth con-ditions (eg, medium, incubation, time).

In selecting therapy, the results of laboratory tests cannot be considered by them-selves, but must be examined with information about the clinical pharmacology of the agent, the cause of the disease, the site of infection, and the pathology of the lesion. These factors must all be taken into account when selecting the appropriate antimicrobic from those to which the organism has been reported as susceptible. If the agent cannot reach the site of infection, it will be ineffective. For example, the agent must reach the subarachnoid space and cerebrospinal fluid in the case of meningitis. Similarly, therapy may be ineffective for an infection that has resulted in abscess formation unless the ab-scess is surgically drained. In some instances (eg, bacterial endocarditis, agranulocytosis), it is necessary to use a bactericidal agent. Previous clinical experience is also critical. In typhoid fever, for instance, chloramphenicol is effective and aminoglycosides are not, even though the typhoid bacillus may be susceptible to both in vitro. This finding appears to result from the failure of aminoglycosides to achieve adequate concentrations inside in-fected cells.

Dilution tests determine the MIC directly by using serial dilutions of the antimicrobic in broth that span a clinically significant range of concentrations. The dilutions are prepared in tubes or microdilution wells, and by convention, they are doubled using a base of 1 μg/mL (0.25, 0.5, 1, 2, 4, 8, and so on). The bacterial inoculum is adjusted to a concen-tration of 105to 106 bacteria/mL and added to the broth. After incubation overnight (or other defined time), the tubes are examined for turbidity produced by bacterial growth. The first tube in which visible growth is absent (clear) is the MIC for that organism (Fig 14 – 1). 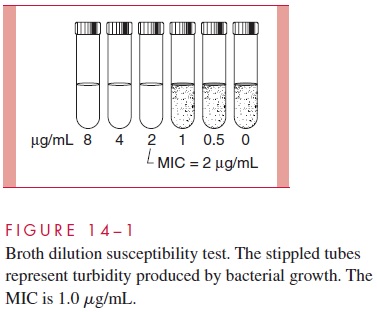 In diffusion testing, the inoculum is seeded onto the surface of an agar plate, and lter paper disks containing de ned amounts of antimicrobics are applied. While the plates are incubating, the antimicrobic diffuses into the medium to produce a circular gradient around the disk. After incubation overnight, the size of the zone of growth inhibition around the disk (Fig 14 – 2A) can be used as an indirect measure of the MIC of the organ-ism. It is also in uenced by the growth rate of the organism, the diffusibility of the antimicrobic, and some technical factors. In the United States, a standardized diffusion procedure accounts for these factors and includes recommendations for interpretation. The diameters of the zones of inhibition obtained with the various antibiotics are con-verted to “susceptible,” “moderately susceptible,” and “resistant” categories by referring to a table. This method is convenient and e xible for rapidly growing aerobic and faculta-tive bacteria such as the Enterobacteriaceae, Pseudomonas, and staphylococci. Another diffusion procedure uses gradient strips to produce elliptical zones that can be directly correlated with the MIC. This method, the E test (Fig 14 – 2B), can also be applied to slow-growing, fastidious, and anaerobic bacteria. 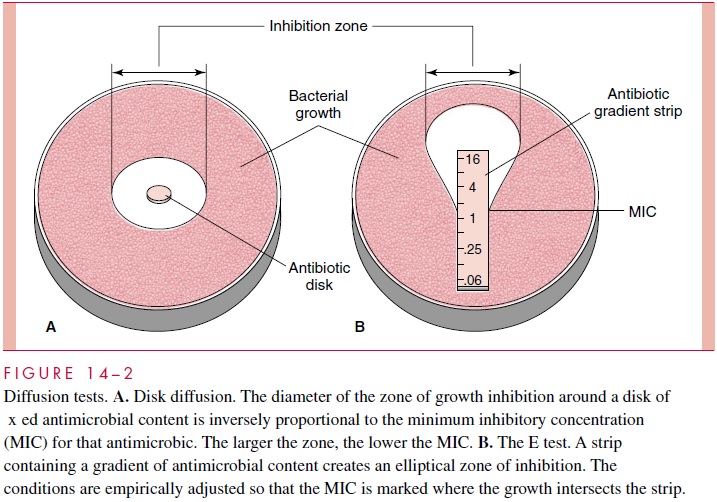 Instruments are now available that carry out rapid, automated variants of the broth dilu-tion test. In these systems the bacteria are incubated with the antimicrobic in specialized modules that are read automatically every 15 to 30 minutes. The multiple readings and the increased sensitivity of determining endpoints by turbidimetric or uorometric analy-sis makes it possible to generate MICs in as little as 4 hours. In laboratories with suf - cient volume, these methods are no more expensive than manual methods, and the rapid results have enhanced potential to in uence clinical outcome, particularly when inter-faced with computerized hospital information systems.

The molecular techniques of nucleic acid hybridization, sequencing, and ampli cation  have been applied to the detection and study of resistance. The basic strategy is to detect the resistance gene rather than measure the phenotypic expression of resistance. These methods offer the prospect of automation and rapid results, but as with most molecular methods, are not yet practical for routine use. Their application will also have to take consideration of the fact that they will be limited to known genes and that phenotypic expression is the “bottom line.”

The above methods do not distinguish between inhibitory and bactericidal activity. To do so requires quantitative subculture of the clear tubes in the broth dilution test and compar-ison of the number of viable bacteria at the beginning and end of the test. The least amount required to kill a predetermined portion of the inoculum (usually 99.9%) is called the minimal bactericidal concentration (MBC). Direct bactericidal testing is important in the initial characterization and clinical evaluation of antimicrobics but is rarely needed in individual cases. Most of the antimicrobics used for acute and life-threatening infec-tions (eg, bβ-lactams, aminoglycosides) act by bactericidal mechanisms.

For antimicrobics with toxicity near the therapeutic range, monitoring the concentration in the serum or other appropriate body fluid is sometimes necessary. Therapeutic monitor-ing may also be required when the patient’s pharmacologic handling of the agent is unpredictable, as in renal failure. A variety of biologic, immunoassay, and chemical pro-cedures have been developed for this purpose.