LPG is typically a mixture of several gases in varying proportions. Major constituent gases are propane (C3H8) and butane (C4H10), with minor quantities of propane (C3H6), various butanes (C4H8), iso-butane, and small amounts of ethane (C2H6). The composition of commercial LPG is quite variable. About 55% of the LPG processed from natural gas purification. The other 45% comes from crude oil refining. LPG is derived from petroleum; LPG does less to relieve the country’s dependency on foreign oil than some other alternative fuels. The gaseous nature of the fuel/air mixture in an LPG vehicle’s combustion chambers eliminates the cold-start problems associated with liquid fuels. LPG defuses in air fuel mixing at lower inlet temperature than is possible with either gasoline or diesel. This leads to easier starting, more reliable idling, smoother acceleration and more complete and efficient burning with less unburned hydrocarbons present in the exhaust. In contrast to gasoline engines, which produce high emission levels while running cold, LPG engine emissions remain similar whether the engine is cold or hot. Also, because LPG enters an engine’s combustion chambers as a vapor, it does not strip oil from cylinder walls or dilute the oil when the engine is cold. This helps to have a longer service life and reduced maintenance costs of engine.

Also helping in this regard is the fuel’s high hydrogen-to-carbon ratio (C3H8), which enables propane-powered vehicles to have less carbon build-up than gasoline and diesel-powered vehicles. LPG delivers roughly the same power, acceleration, and cruising speed characteristics as gasoline. Its high octane rating means engine’s power output and fuel efficiency can be increased beyond what would be possible with a gasoline engine without causing Destructive Knocking. Such fine-tuning can help compensate for the fuel’s lower energy density. The higher ignition temperature of gas compared with petroleum based fuel leads to reduced auto ignition delays,less hazardous than any other petroleum based fuel and expected to produce less CO, NOx emissions and may cause less ozone formation than gasoline and diesel engines. 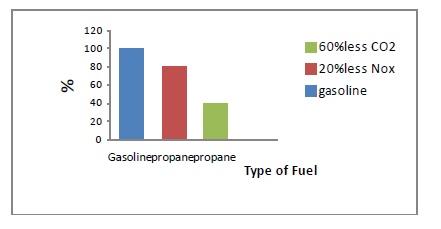 LPG engines similar to petrol engines, and deliver nearly similar performance and good in combustion characteristics than Gasoline. In the short term, LPG as a alternative fuels reviewed could displace 10 per cent of current usage of oil, or bring significant reductions in CO, CO2 emissions and help to reduce harmful greenhouse gas emissions. In the next five to ten years, LPG will be more widely available and gaining market share across vehicle ranges.