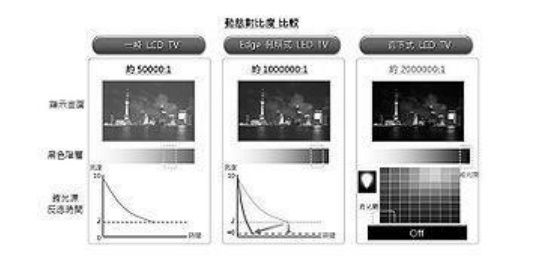 LED-backlight LCD television (incorrectly called LED TV by (CCFLs) used in traditional LCD televisions. This has a dramatic impact resulting in a thinner panel and less power consumption, brighter display with better contrast levels. It also generates less heat than regular LCD TVs. The LEDs can come in three forms: dynamic RGB LEDs which are positioned behind the panel, white Edge-LEDs positioned around the rim of the screen which use a special diffusion panel to spread the light evenly behind the screen (the most common) and full-array which are arranged behind the screen but they are incapable of dimming or brightening individually

This method of backlighting allows dimming to occur in locally specific areas of darkness on the screen. This can show truer blacks, whites and PRs[clarification needed] at much higher dynamic contrast ratios, at the cost of less detail in small bright objects on a dark background, such as star fields

This method of backlighting allows for LED-backlit TVs to become extremely thin. The light is diffused across the screen by a special panel which produces a uniform color range across the screen.

Sharp, and now other brands, also have LED backlighting technology that aligns the LEDs on back of the TV like the RGB Dynamic LED backlight, but it lacks the local dimming of other sets.[6] The main benefit of its LED backlight is simply reduced energy consumption and may not improve quality over non-LED LCD TVs.[7]

The variations of LED backlighting do offer different benefits. The first commercial LED backlit LCD TV was the Sony Qualia 005 (introduced in 2004). This featured RGB LED arrays to offer a color gamut around twice that of a conventional CCFL LCD television (the combined light output from red, green and blue LEDs produces a more pure white light than is possible with a single white light LED). RGB LED technology continues to be used on selected Sony BRAVIA LCD models, with the addition of 'local dimming' which enables excellent on-screen contrast through selectively turning off the LEDs behind dark parts of a picture frame.

Edge LED lighting was also first introduced by Sony (September 2008) on the 40 inch BRAVIA KLV-40ZX1M (referred to as the ZX1 in Europe). The principal benefit of Edge-LED lighting for LCD televisions is the ability to build thinner housings (the BRAVIA KLV-40ZX1M is as thin as 9.9mm). Samsung has also introduced a range of Edge-LED lit LCD televisions with extremely thin housings.

LED-backlit LCD TVs are considered a more sustainable choice, with a longer life and better energy efficiency than plasmas and conventional LCD TVs. Unlike CCFL backlights, LEDs also use nomercury in their manufacture. However, other elements such as gallium and arsenic are used in the manufacture of the LED emitters themselves, meaning there is some debate over whether they are a significantly better long term solution to the problem of TV disposal.

Because LEDs are able to be switched on and off more quickly than CCFL displays and can offer a higher light output, it is theoretically possible to offer very high contrast ratios. They can produce deep blacks (LEDs off) and a high brightness (LEDs on), however care should be taken with measurements made from pure black and pure white outputs, as technologies like Edge-LED lighting do not allow these outputs to be reproduced simultaneously on-screen.

In September 2009 Nanoco Group announced that it has signed a joint development agreement with a major Japanese electronics company under which it will design and develop quantum dots for LED Backlights in LCD televisions. Quantum dots are valued for displays, because they emit light in very specific gaussian distributions. This can result in a display that more accurately renders the colors than the human eye can perceive. Quantum dots also require very little power since they are not color filtered. In September 2010, LG Electronics revealed their new product which claimed as the world's slimmest full LED 3D TV at the IFA consumer electronics trade show in Berlin