Ø       Printers can be classified according to their printing methodology Impact printers and Non-impact printers.

Ø       Impact printers press formed character faces against an inked ribbon onto the paper.

Ø       A line printer and dot matrix printer are the examples of an impact printer.

Ø       Non impact printer and plotters use laser techniques, inkjet sprays, xerographic processes, electrostatic methods and e1ectrothermal methods to get images onto the paper.

Ø       A ink-jet printer and laser printer are the examples of non- impact printers.

A line printer prints a complete line at a time. The printing speed of line printer varies from 150 lines to 2500 lines per minute with 96 to 100 characters on one line. The line printers are divided into two categories Drum printers and chain printer.

Drum printer consists of a cylindr ical drum. One complete set of characters i s embossed on all the print positions on a l ine, as shown in the Fig. The character to be printed is adjusted by rotating drum. 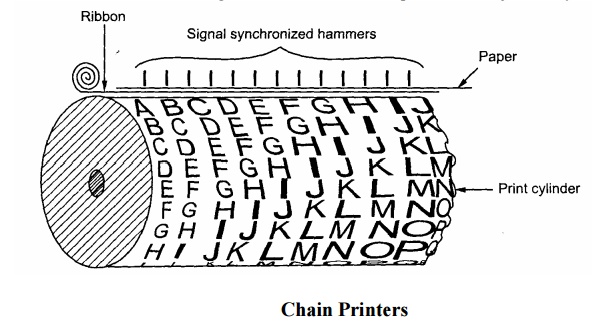 In these printers chain with embossed character set is used, instead of drum. Here, the character to be printed is adjusted by rotating chain.

Dot matrix printers are also called serial printers as they print one character at a time, with printing head moving across a line. 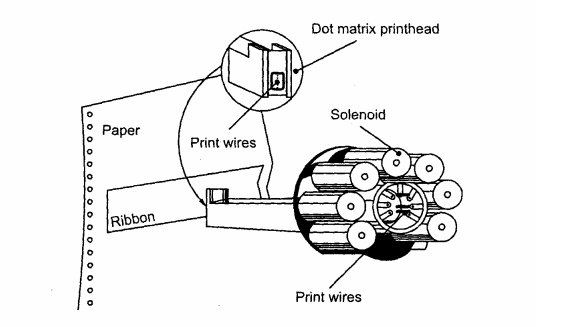 Ø       The line, do t matrix, and ink jet printers need a head movement on a ribbon to print characters.

Ø       This mechanical  movement is relatively slow due to the high inertia of mechanical elements.

Ø       In laser printers these mechanical movements are avoided.

Ø In these printers, an electronically controlled lase r beam traces out the desired character to be printed on a photoconductive drum.

Ø       This image is then transferred to the paper which comes in contact with the drum with pressure and heat.

Ø       The charge on the drum decides the darkness of the print. 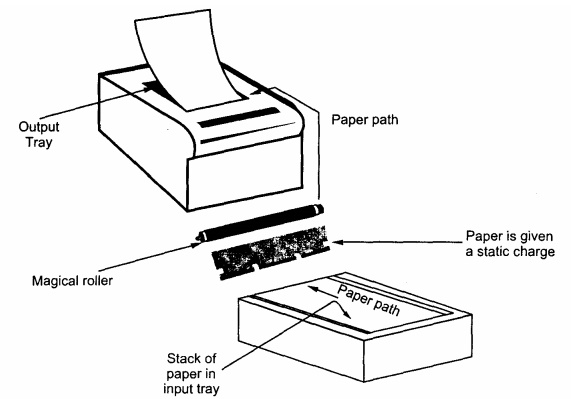 Ø       The high quality and speed of laser printers make them ideal for office environment.

Ø   The main advantages of laser printers are speed, precision and economy.

Ø A laser can move very quickly, so it can “ write” with much greater speed than an  inket.

Ø Because the laser beam has an unvarying diameter, it can draw more precisely, without spilling any excess ink.

Ø Laser printers tend to be more expensive than ink-jet printers, but it doesn’t cost as much to keep them running.

Ø   Its toner power is cheap and lasts for longer time.