Knowledge management (KM) is the process of capturing, developing, sharing, and effectively using organizational knowledge. It refers to a multi-disciplined approach to achieving organisational objectives by making the best use of knowledge.

Knowledge management (KM) is the process of capturing, developing, sharing, and effectively using organizational knowledge. It refers to a multi-disciplined approach to achieving organisational objectives by making the best use of knowledge.

"Knowledge management is the process of capturing, distributing, and effectively using knowledge."

This definition has the virtue of being simple, stark, and to the point. A few years later, the Gartner Group created another second definition of KM, which is perhaps the most frequently cited one (Duhon, 1998):

"Knowledge management is a discipline that promotes an integrated approach to identifying, capturing, evaluating, retrieving, and sharing all of an enterprise's information assets. These assets may include databases, documents, policies, procedures, and previously un-captured expertise and experience in individual workers."

Both definitions share a very organizational, a very corporate orientation. KM, historically at least, is primarily about managing the knowledge of and in organizations.

The operational origin of KM, as the term is understood today, arose within the consulting community and from there the principles of KM were rather rapidly spread by the consulting organizations to other disciplines. The consulting firms quickly realized the potential of the Intranet flavor of the Internet for linking together their own geographically dispersed and knowledge-based organizations. Once having gained expertise in how to take advantage of intranets to connect across their organizations and to share and manage information and knowledge, they then understood that the expertise they had gained was a product that could be sold to other organizations. A new product of course needed a name, and the name chosen, or at least arrived at, was Knowledge Management. The timing was propitious, as the enthusiasm for intellectual capital in the 1980s, had primed the pump for the recognition of information and knowledge as essential assets for any organization.

Perhaps the most central thrust in KM is to capture and make available, so it can be used by others in the organization, the information and knowledge that is in people's heads as it were, and that has never been explicitly set down.

What is still probably the best graphic to try to set forth what KM is constituted of, is the graphic developed by IBM for the use of their KM consultants, based on the distinction between collecting stuff (content) and connecting people, presented here with minor modifications (the marvelous C, E, and H mnemonics are entirely IBM's): 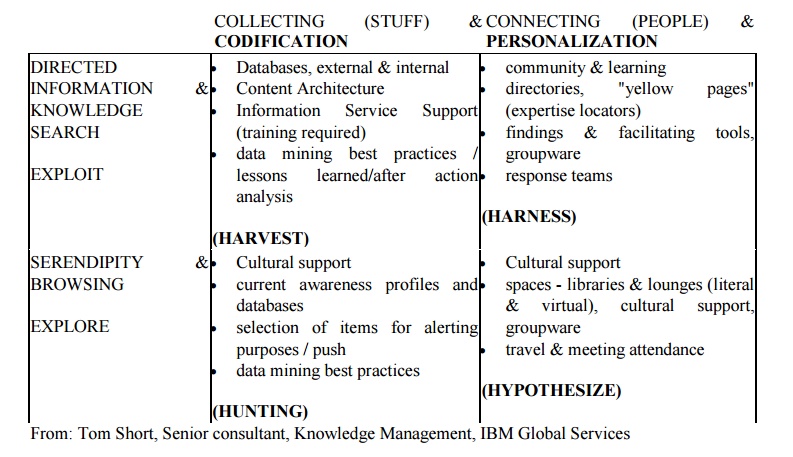 Another way to view and define KM is to describe KM as the movement to replicate the information environment known to be conducive to successful R&D—rich, deep, and open communication and information access—and deploy it broadly across the firm. It is almost trite now to observe that we are in the post-industrial information age and that an increasingly large proportion of the working population consists of information workers. The role of the researcher, considered the quintessential information worker, has been studied in depth with a focus on identifying environmental aspects that lead to successful research (Koenig, 1990, 1992), and the strongest relationship by far is with information and knowledge access and communication. It is quite logical then to attempt to apply those same successful environmental aspects to knowledge workers at large, and that is what in fact KM attempts to do.

The Stages of Development of KM

Looking at KM historically through the stages of its development tells us not only about the history of KM, but it also reveals a great deal about what constitutes KM.

The initial stage of KM was driven primarily by IT, information technology. That first stage has been described using an equestrian metaphor as ―by the internet out of intellectual capital‖. The concept of intellectual capital provided the justification and the framework, the seed, and the availability of the internet provided the tool. As described above, the consulting community jumped at the new capabilities provided by the Internet, using it first for themselves, realizing that if they shared knowledge across their organization more effectively, then they could avoid reinventing the wheel, underbid their competitors, and make more profit. The first use of the term Knowledge Management in the new context appears to have been at McKinsey. They realized quickly that they had a compelling new product. Ernst and Young organized the first conference on KM in 1992 in Boston (Prusak, 1999). The salient point is that the first stage of KM was about how to deploy that new technology to accomplish more effective use of information and knowledge.

It became clear that KM implementation would involve changes in the corporate culture, in many cases rather significant changes. Consider the case above of the new pediatric medicine and the discovery of the efficacy of adding orange juice to the recipe. Pharmaceutical sales reps are compensated primarily not by salary, but by bonuses based on sales results. What is in it for that sales rep to share her new discovery when the most likely result is that next year her bonus would be substantially reduced? The changes in corporate culture needed to facilitate and encourage information and knowledge sharing can be major and profound. KM therefore extends far beyond just structuring information and knowledge and making it more accessible.

As this recognition unfolded, two major themes from the business literature were brought into the KM fold. The first was Senge‘s work on the learning organization (Senge, Peter M., 1990 The Fifth Discipline: The Art and Practice of the Learning Organization.) The second was Nonaka‘s work on ―tacit‖ knowledge and how to discover and cultivate it (Nonaka, Ikujiro & Takeuchi, Hirotaka, 1995 The Knowledge-Creating Company: How Japanese Companies Create the Dynamics of Innovation.) Both were not only about the human factors of KM implementation and use; they were also about knowledge creation as well as knowledge sharing and communication. The hallmark phrase of Stage 2 was ―communities of practice.‖ A good marker of the shift from the first to the second stage of KM is that for the 1998 Conference Board conference on KM, there was for the first time a noticeable contingent of attendees from HR, human resources, departments, and by the next year, 1999, HR was the largest single group, displacing IT attendees from first place.

Summit reported that for the first time taxonomies emerged as a topic, and it emerged full blown as a major topic (TFPL, 2001 Knowledge Strategies – Corporate Strategies.) The hallmark phrases emerging for the third stage are content management (or enterprise content management) and taxonomies.. At KMWorld 2000 a track on Content Management appeared for the first time, and by the 2001 KMWorld Conference, Content Management had become the dominant track. In 2006, KMWorld added a two-day workshop entitled Taxonomy Boot Camp, which still exists today. The hallmark terms for the third stage of KM are taxonomy and content.

One issue is the need to retain the knowledge of retirees. Of course the fact that the baby boomer bulge is now reaching retirement age is making this issue particularly salient. KM techniques are very relevant to this issue. One technique is the application of the lessons learned idea—just treat the retiree‘s career as a long project that is coming to its end and create an after action report, a massive data dump. This idea seems obvious, but only in special cases is it likely to be very useful.

Much more likely to be useful is to keep the retiree involved, maintain him or her in the CoPs and findable through expertise locater systems. The real utility is likely to be found not directly in the information that the retiree leaves behind, but in new knowledge created by the interaction of the retiree with current employees. The retiree says "it occurs to me that ..." and elicits a response something like ―yes, but here ...,‖ a discussion unfolds, the retiree contributes some of the needed expertise, and a solution is generated. The solution arises not directly from the retiree‘s knowledge but rather from the interaction.

Another major development is the expansion of KM beyond the 20th century vision of KM as the organization‘s knowledge as described in the Gartner Group definition of KM. Increasingly KM is seen as ideally encompassing the whole bandwidth of information and knowledge likely to be useful to an organization, including knowledge external to the organization—knowledge emanating from vendors, suppliers, customers, etc., and knowledge originating in the scientific and scholarly community, the traditional domain of the library world. Looked at in this light, KM extends into environmental scanning and competitive intelligence.