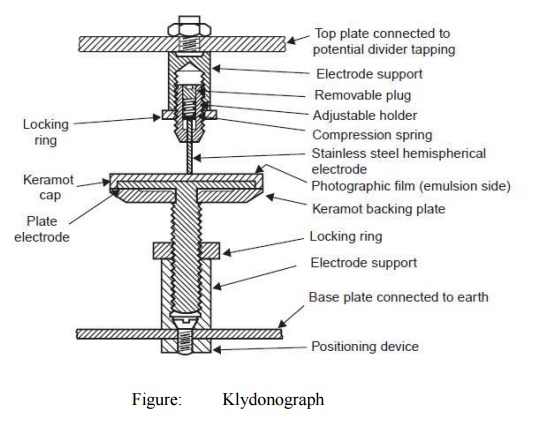 Since lightning surges are infrequent and random in nature, it is necessary to install a large number of recording devices to obtain a reasonable amount of data regarding these surges produced on transmission lines and other equipments.

Since lightning surges are infrequent and random in nature, it is necessary to install a large number of recording devices to obtain a reasonable amount of data regarding these surges produced on transmission lines and other equipments. Some fairly simple devices have been developed for this purpose.

Klydonograph is one such device which makes use of the patterns known as Lichtenberg Figure which are produced on a photographic film by surface corona discharges. The Klydonograph (Fig. 4.16) consists of a rounded electrode resting upon the emulsion side of a photographic film or plate which is kept on the smooth surface of an insulating material plate backed by a plate electrode. The minimum critical voltage to produce a Figure is about 2 kV and the maximum Voltage that can be recorded is about 20 kV, as at higher voltages spark over’s occurs which spoils the film. The device can be used with a potential divider to measure higher voltages and with a resistance shunt to measure impulse current. There are characteristic differences between the Figure for positive and negative voltages. However, for either polarity the radius of the Figure (if it is symmetrical) or the maximum distance from the centre of the Figure to its outside edge (if it is unsymmetrical) is a function only of the applied voltage. The oscillatory voltages produce superimposed effects for each part of the wave. Thus it is possible to know whether the wave is unidirectional or oscillatory. Since the size of the Figure for positive polarity is larger, it is preferable to use positive polarity Figure. This is particularly desirable in case of measurement of surges on transmission lines or other such equipment which are ordinarily operating on a.c. voltage and the alternating voltage gives a black band along the centre of the film caused by superposition of positive and negative Figure produced on each half cycle. 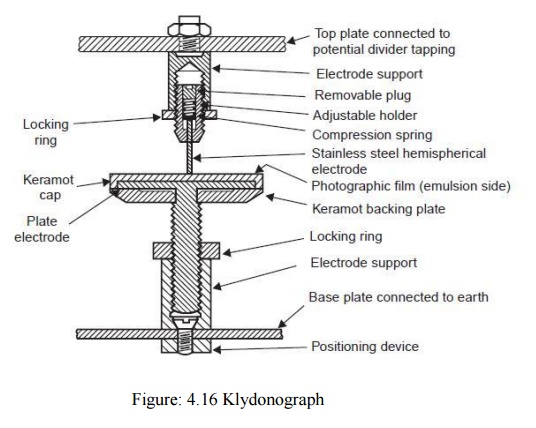 Klydonograph being a simple and inexpensive device, a large number of elements can be used.