The Indian National Congress, in contrast to the violent actions of revolutionaries, mobilised the masses for non-violent struggles.

The Indian National Congress, in contrast to the violent actions of revolutionaries, mobilised the masses for non-violent struggles. The Congress under the leadership of Gandhi gave priority to the problems of peasants. In the context of great agrarian distress, deepened by world-wide economic depression, the Congress mobilised the peasantry. The Congress adopted a no-rent and no-tax campaign as a part of its civil disobedience programme. Under the pressure of Great Depression, socio-economic demands were sharply articulated in its Karachi Session of the Indian National Congress. 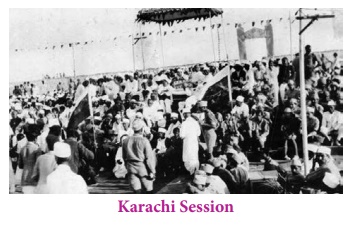 The freedom struggle was taking a new shape. Peasants organised themselves into Kisan Sabhas and industrial workers were organized by the trade unions, made their presence felt in a big way in the freedom struggle. The Indian National Congress had become a mass party during the 1930s. The Congress leadership, which was now taking a left turn under Nehru’s leadership, began to talk about an egalitarian society based on social and economic justice.

The Karachi session held in March 1931, presided over by Sardar Valabhbhai Patel, adopted a resolution on Fundamental Rights and Duties and provided an insight into what the economic policy of an independent India. In some ways, it was the manifesto of the Indian National Congress for independent India. These rights and the social and economic programmes were derived from a firm conviction that political freedom and economic freedom were inseparable.

Even a cursory look at the fundamental rights resolution will tell you that all the basic rights that the British denied to the Indians found a prominent place in the Resolution. The colonial government curtailed civil liberties and freedom by passing draconian acts and ordinances. Gandhian ideals and Nehru’s socialist vision also found a place in the list of rights that the Indian National Congress promised to ensure in free India. The existing social relations, especially the caste system and the practice untouchability, were also challenged with a promise to ensure equal access to public places and institutions.