The colonial administrators did not take the spread of communist ideas lightly. 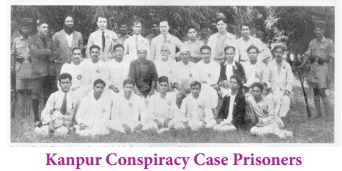 The colonial administrators did not take the spread of communist ideas lightly. Radicalism spread across the British Provinces – Bombay, Calcutta and Madras - and industrial centres like Kanpur in United Province (UP) and cities like Lahore where factories had come up quite early. As a result, trade unions emerged in the jute and cotton textile industries, the railway companies across the country and among workers in the various municipal bodies. In order to curb the radicalisation of politics, especially to check what was then called Bolshevism, repressive measures were adopted by the British administration. The Kanpur Conspiracy case of 1924 was one such move. Those charged with the conspiracy were communists and trade unionists.

The accused were arrested spread over a period of six months. Eight of them were charged under Section 121-A of the Indian Penal Code – ‘to deprive the King Emperor of his sovereignty of British India, by complete separation of India from imperialistic Britain by a violent revolution’, and sent to various jails. The case came before Sessions Judge H.E. Holmes who had earned notoriety while serving as Sessions Judge of Gorakhpur for awarding death sentence to 172 peasants for their involvement in the Chauri Chaura case.

In the Kanpur Conspiracy case, Muzaffar Ahmed, Shaukat Usmani, Nalini Gupta and S. A. Dange were sent to jail, for four years of rigorous imprisonment. The trial and the imprisonment, meanwhile, led to some awareness about the communist activities in India. A Communist Defence Committee was formed in British India to raise funds and engage lawyers for the defence of the accused. Apart from these, the native press in India reported the court proceedings extensively.

The trial in the conspiracy case and the imprisonment of some of the leaders, rather than kill the spirit of the radicals gave a fillip to communist activities. In December 1925, a Communist Conference of different communist groups, from all over India, was held.Singaravelar from Tamil Nadu took part in this conference. It was from there that the Communist Party of India was established, formally, with Bombay as its Headquarters.

M. Singaravelar (18 February 1860 – 11 February 1946), was born in Madras. He was an early Buddhist, and like many other communist leaders, he was also associated with Indian National Congress initially. However, after sometime he chose a radical path. Along with Thiru. V. Kalyanasundaram, he organised many trade unions in South India. On 1 May 1923, he organised the first ever celebration of May Day in the country. He was one of the main organisers of the strike in South Indian Railways (Golden Rock, Tiruchirappalli) in 1928 and was prosecuted for that.