The Later Vedic period (900–600 BCE) witnessed the transition from a tribal polity based on lineage to a territorial state.

The Later Vedic period (900–600 BCE) witnessed the transition from a tribal polity based on lineage to a territorial state. The janas who migrated eastwards began to settle down in various regions. The loyalty of the people shifted from jana (tribe or clan) to janapada (territory). Janapada literally meant ‘the place where the tribe sets its foot upon.’ The janapadas fought with one another for resources and political dominance. Some janapadas extended their territories and brought various janas within their jurisdiction. Such janapadas grew into mahajanapadas.

Territory, people, government and sovereignty are important elements of a state. All these elements were found in some of the mahajanapadas. The mahajanapadas represented the emergence of territorial kingdoms that ruled over people (jana). The king headed the government aided by a centralised administration. The king was also the sovereign ruler. The king levied taxes out of agricultural surplus and redistributed it and ensured maintenance of law and order in a hierarchical society by force and coercion. These features marked the formation of state in the Gangetic plains.

According to Puranic, Buddhist and Jaina traditions, there were sixteen mahajanapadas.

The mahajanapadas are classified as gana-sanghas and chiefdoms based on the nature of their polity. 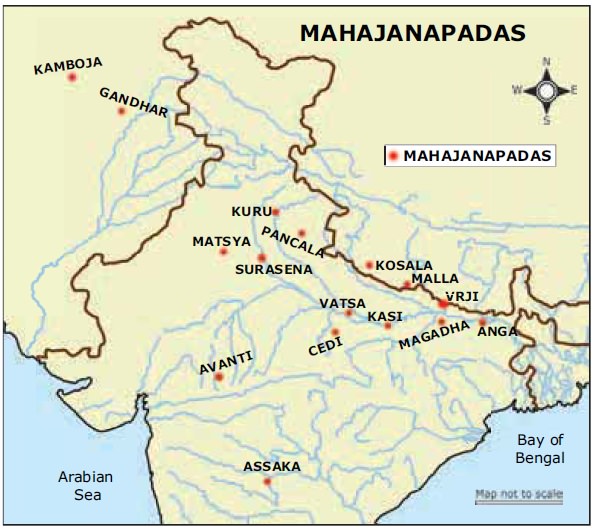 The proto-states of the Gangetic region were known as janapadas and comprised chiefdoms, republics and small kingdoms. Sixteen mahajanapadas find mention in the early texts. There were also gana-sanghas or oligarchies, which were centred on clans. The Vrijjis were one of the best known of the gana-sanghas, and Vaishali was their capital in the Mithila region. These kingdoms did not come under the single decision-making authority of a king but decisions were taken on a collective basis by the heads of the different clans together. There were also smaller kingdoms such as Kosala and Kasi. It is interesting to note that the names of the clans, such as Ikshvaku and Vrishni, as well as these early kingdoms, are all mentioned in the two epics, Ramayana and Mahabharata.

The mahajanapadas on the Gangetic plains were all monarchies. Vedic orthodoxy was an established practice in these kingdoms. The priestly class enjoyed a preeminent status in the mahajanapadas unlike in the gana-sanghas. The kingdoms were governed by kings and the administration was centralised. The brahman priests provided legitimacy to the king through various rituals. The kingship was hereditary and the succession was in most cases based on the law of primogeniture. The king was assisted by councils called parishad and sabha. The councils were advisory in nature. The king appropriated the agricultural surplus through land revenue apart from a few other taxes. Bali was a tax imposed based on the area of cultivable land. Bhaga was obtained as a share of the produce. Kara and Shulka were some of the other taxes collected during this period. Thus the king raised revenue through taxes to maintain an elaborate administrative structure and an army.

The richer landowners were called grihapatis. These landowners employed labourers called dasas or karmakaras. The smaller landowners were known as kassakas or krishakas. The society was stratified on the basis of varna. It emerged as a marker of status. Cultivators and artisans were identified as the shudras. A new social category that emerged during this period was placed below the shudras in the social hierarchy and considered untouchables. They were forced to live on the fringes of the settlements and subsisted on hunting and gathering their food. They were marginalised and given only menial jobs as urbanisation was on the rise. They had their own language, which was different from that spoken by the Indo-Aryans.