Among the heterodox sects, Buddhism was the most popular.

Among the heterodox sects, Buddhism was the most popular. It went on to emerge as a powerful religion patronised by various rulers. It was so influential that its ideas were adopted by Asoka as a state policy. Though it virtually disappeared from India for nearly a millennium, it spread far and wide and is widely followed even today in the South-east and East Asian countries. In the mid-twentieth century it was revived in India by Dr. B.R. Ambedkar.

Gautama Buddha was born as Siddhartha in the Sakya clan to its king Suddhodhana and his chief queen Mahamaya. His mother Mahamaya dreamt of a white elephant with six tusks entering her womb when she was pregnant. Learned men prophesied that the child would either become ‘a Universal Emperor or a Universal Teacher’. While Mahamaya was going to her parents’ home, Siddhartha was born in a park in Lumbini near Kapailavastu. Siddhartha grew in luxury as a royal prince. He married Yashodhara and had a son named Rahula. When he was riding on his chariot with his charioteer one day outside the palace, he saw an old man, a sick man, a corpse and finally a religious mendicant. Overcome by remorse at the misery of people, he left his palace in the dead of night in search of eternal truth. He rode in his chariot pulled by his favourite horse Kanthaka and driven by his charioteer Channa far away from the city. He cut his hair and sent it along with his discarded garments and jewellery to his father. This is known as Mahabhiraskramana or the Great Going Forth. 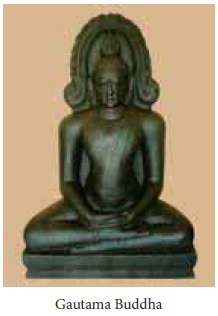 Siddhartha wandered about and joined Alara Kalama as a disciple for a brief period. He also sought guidance from a hermit Uddaka Ramaputta. Siddartha was not satisfied with their path and practised severe austerities, which left him nearly dead. One day, he ate rice boiled in milk given by a milkmaid named Sujata and began meditation under a pipal tree in Bodhgaya. After 49 days of meditation, he attained enlightenment, at the age of 35. Thereafter, he came to be called Buddha or the Enlightened. He then delivered his first sermon in a deer park in Sarnath near Varanasi. This event is described as Dharmachakra-parivartana or ‘wheel of the great law’. He spoke about the Four Noble Truths and the Middle Path. He established Sangha and spread his ideas far and wide. Buddha and his followers travelled for eight months of the year and stayed at a place for four months of the rainy season. At the age of 80, he passed away in Kusinagara. This is known as Parinirvana. The prominent disciples of Buddha were Sariputta, Maha-moggallana, Mahakaccayana and Ananda. Buddha had a huge following among both the royalty and lay persons. 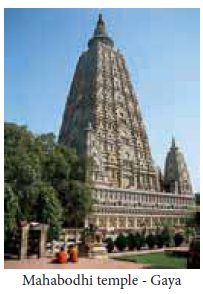 After the death of Buddha, the tenets and other aspects of Buddhism were decided upon in the councils of Buddhist monks. Over a period of time, four Buddhist councils were held. The First Buddhist Council was held at Rajgriha after Buddha’s death. It was headed by Upali. In this council, Upali recited the Vinaya Pitaka. Ananda recited Sutta Pitaka. The Second Buddhist Council met at Vaishali a century after Buddha’s death. The Buddhist Order split into two later. One was called the Sthaviravadins or ‘Believers in the Teachings of the Elders’ and the other known as Mahasanghikas or ‘Members of the Great Community’. The Third Buddhist Council was held at Pataliputra. It was convened by Asoka. The Sthaviravadins established themselves strongly and expelled the heretics. The last section called “Kathavatthu” was added to Abhidhamma Pitaka. The Fourth Buddhist Council was held at Kashmir during the reign of Kanishka. Sarvastivadins were an important sect of Buddhism. Its doctrines were compiled in Mahavibhasa. 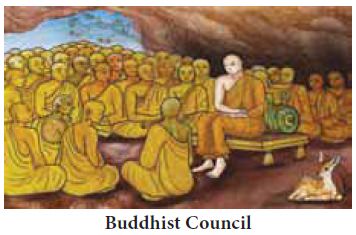 In course of time, Sthaviravadins, Mahasanghikas and Sarvastivadins emerged as major sects of Buddhism. New ideas emerged among the Sarvastivadins and Mahasanghikas. It led to the emergence of Mahayana and Hinayana (the Great and Lesser Vehicles) in Buddhism. Mahayana or the Great Vehicle became popular and influential in India. Nalanda University was an important centre of Buddhist learning and was patronised by the Palas. It spread to China and Japan. Hinayana or the Lesser Vehicle became popular in Sri Lanka, Burma, Thailand and other South-east Asian countries. By the end of the Gupta period, Vajrayana or the Vehicle of the Thunderbolt emerged. It was popular in Bengal and Bihar. It was influenced by primitive local cults and spread to Tibet in the 11th century CE. The Vikramasila University in Bihar was an important centre of Vajrayana Buddhism.

Buddhism in India began to decline with the onset of the Bhakti movement. Slowly Buddhism came to be influenced by Hindu practices. Soon, Buddhism was incorporated into Hinduism, and Buddha came to be considered as an avatar of Vishnu in some traditions.

The Buddhist texts were compiled in Pali. The Pali canons are called as the Tripitakas (Three Baskets). They are Vinaya Pitaka, Sutta Pitaka and Abhidhamma Pitaka. Vinaya Pitaka deals with monastic rules and moral disciplines. Sutta Pitaka dwells upon discourses and teachings of Buddha. Abhidhamma Pitaka expounds Buddhist philosophy. The Sutta Pitaka, which contains the teachings of Buddha, is divided into five groups or Nikayas. They contain popular works such as Theragatha and Therigatha (Hymns of the Elder Monks and Nuns) and Jataka tales (Buddha’s deeds in previous births as Bodhisattva).

The  four noble  truths prescribed  by

Buddha are as follows:

2. The Noble Truth of the Origin of Suffering: thirst for pleasure, power, long life, etc. are the causes for sorrow.


3. The Noble Truth of the Cessation of Suffering (Nirvana): complete stopping or release from sorrow.

4. The Noble Truth of the Path Leading to Cessation of Suffering: the Noble Eight fold Path or the Middle Path.

Buddhism believed in karma and the doctrine of rebirth. Past actions determine one’s condition in this birth. To be free from karma or the cycle of rebirth is to attain nirvana. It can be attained by following the Middle Path.

Hence Buddha did not mention or talk about God. He neither accepted nor denied the existence of God. Buddhism advocated equality. It preached non-violence or ahimsa and love towards all. However, it was a moderate religion compared to Jainism’s insistence on ahimsa. It promoted trade and capitalism as it was against waste and advocated frugality. Jobs involving any form of killing were forbidden. Trade in weapons, living beings, meat, liquor and poison were not permitted.

Buddhism spread to Tamizhagam from about third century BCE. Asokan inscriptions found in the Deccan region vouch for the spread of Buddhism to southern parts of India. Archaeological evidences also reveal the existence of a Buddhist complex of the fourth century CE in Kaveripattinam. Quoting Pattinapalai, Noboru Karashima refers to merchants in Kaveripattinam who as vegetarians were opposed to animal sacrifice. From this one could presume the influence of Buddhism in Tamil country. Manimekalai by Sattanar one of the twin epics of the post-Sangam age is a Buddhist literature. Similarly the now extinct Kundalakesi is a Buddhist epic. Kanchipuram in the early Christian era was a flourishing Buddhist centre. Dinnaga and Dhammapala who headed the famous Nalanda University were renowned Buddhist scholars from Kanchipuram. Hiuen Tsang who visited Tamil country mentions in his travel accounts about several Buddhist Stupas built by Asoka in Kanchipuram.

A Buddhist temple was built in Nagapattinam at the request of a Chinese ruler during the reign of Pallava king Narasimhavarman II (CE 695-722). Chinese monk Wu-hing visited the monastery. In CE 1006, during the reign of Rajaraja I, Srivijaya King Mara-wijayottungga-varman built a Buddhist temple in Nagapattinam. It is called the Soolamani-varma-vihara.

Decline of Buddhism in India

Buddhism faced divisions from time to time. Division into various splinter groups like ‘Hinayana’, ‘Mahayana’, ‘Vajrayana’, ‘Tantrayana’ and ‘Sahajayana’ led Buddhism to lose its originality. Pali and Prakrit were the spoken languages of people of north India and it was through these languages the message of Buddhism was spread. But ever since the times of Fourth Buddhist Council held during the reign of Kanishka, Sanskrit had come to be adopted. Buddhism thereupon became unintelligible to common people.

Buddhism also lost its royal patronage after Harshavardhana. In contrast, the Vedic religion got royal patronage first from Pushyamitra Sunga and later from imperial Guptas. The role of the exponents of Bhakti movement like Ramanuja, Ramananda also helped to Toramana Coin restore the glory of Vedic religion. 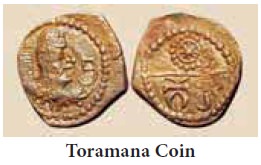 The invasion of Huns gave a deathblow to Buddhism. Toramana and Mihirakula, the two Hun chiefs had a deep-seated hatred for the Buddhists and they almost liquidated the Buddhists living in the north-west India. To make matters worse, the Rajput rulers who could not reconcile to the Buddhist concept of non-violence, and as ardent advocates of Vedic religion started persecuting the Buddhists. Finally the invading Arabs and Turks forced the Buddhist monks to flee from India and seek asylum in Nepal, Tibet and Ceylon. In consequence Buddhism faded away in India.