Learning Objectives : • To know the sources and literature of heterodox religious sects: Jainism, Buddhism and Ajivikam • To gain knowledge of the teachings of Mahavira, Buddha and Gosala, the founder of Ajivika sect. • To acquaint ourselves with the monuments of the above-mentioned religious sects in Tamil Nadu.

• To know the sources and literature of heterodox religious sects: Jainism, Buddhism and Ajivikam

• To gain knowledge of the teachings of Mahavira, Buddha and Gosala, the founder of Ajivika sect.

• To acquaint ourselves with the monuments of the above-mentioned religious sects in Tamil Nadu.

During the 6th century B.C. (BCE), according to the Bigha Nitaya (an ancient Buddhist tract), as many as 62 different philosophical and religious schools flourished in India. However, among these numerous sects, only the Ajivikas survived till the late medieval times. But Jainism and Buddhism continued to flourish until the modern times. Buddha and Mahavira, the founders of these two faiths, based their ethical teachings against the sacrificial cult of the Vedic religion. Their teachings were preserved and passed on through monks, who were drawn from various social groups.

Mahavira's preaching was orally transmitted by his disciples over the course of about one thousand years. In the early period of Jainism, monks strictly followed the five great vows of Jainism. Even religious scriptures were considered possessions and therefore knowledge of the religion was never documented. Two hundred years after the attainment of nirvana (death) of Mahavira, Jain scholars attempted to codify the canon by convening an assembly at Pataliputra. It was the first Jain council to debate the issue, but it ended as a failure because the council could not arrive at a unanimous decision in defining the canon. A second council held at Vallabhi, in the 5th century A.D., was, however, successful in resolving the differences. This enabled the scholars of the time to explain the principles of Jainism with certainty. Also, over time, many learned monks, older in age and rich in wisdom, had compiled commentaries on various topics pertaining to the Jain religion. Around 500 A.D. (CE) the Jain acharyas (teachers) realised that it was extremely difficult to keep memorising the entire Jain literature complied by the many scholars of the past and present. In fact, significant knowledge was already lost and the rest was tampered with modifications. Hence, they decided to document the Jain literature as known to them

A major split occurred in Jainism (1st century B.C.), giving rise to two major sects, namely Digambaras and Swetambaras. Both the Digambaras and the Swetambaras generally acknowledge the Agama Sutras to be their early literature, while they do differ with regard to their content and interpretation.

Agama Sutras consists of many sacred books of the Jain religion. They have been written in the Ardha-magadhi Prakrit language. Containing the direct preaching of Mahavira, consisting of 12 texts, they were originally compiled by immediate disciples of Mahavira. The 12th Agama Sutra is said to have been lost.

Non-Agama literature includes commentary and explanation of Agama Sutras, and independent works, compiled by ascetics and scholars. They are written in many languages such as Prakrit, Sanskrit, old Marathi, Rajasthani, Gujarati, Hindi, Kannada, Tamil, German and English. Recognition was given to 84 books, and among them, there are 41 sutras, 12 commentaries and one Maha Bhasya or great commentary. The 41 sutras include 11 Angas (scriptures followed by Swetambaras), 12 Upangas (instructions manuals), five Chedas (rules of conduct for the monks), five Mulas (basic doctrine of Jainism) and eight miscellaneous works, such as Kalpasutra of Bhadrabahu. It is believed that the Panchatantra has a great amount of Jain influence.

The Jainacharitha of Kalpa Sūtra is a Jain text containing the biographies of the Jain Tirthankaras, notably Parshvanatha, founder of Jainism as well as the first Tirthankara, and Mahavira, the last and the 24th Tirthankara. This work is ascribed to Bhadrabahu, who along with Chandragupta Maurya migrated to Mysore (about 296 B.C.) and settled there.

Tirthankaras are those who have attained nirvana and made a passage from this world to the next.

In addition to these, we have some Jain texts composed in Indian vernacular languages such as Hindi, Tamil and Kannada. Jivaka Chintamani, a Tamil epic poem, is a good example, composed in the tradition of Sangam literature by a Jain saint named Tiruthakkathevar. It narrates the life of a pious king who rose to prominence by his own merit only to become an ascetic in the end. Another scholarly work in Tamil, Naladiyar, is also attributed to a Jain monk. Thirukkural was composed by Tiruvalluvar, believed to be a Jain scholar.

There is a clear evidence of the movements of the Jains from Karnataka to the Kongu region (Salem, Erode and Coimbatore areas), to the Kaveri Delta (Tiruchirapalli) southwards into Pudukkottai region (Sittannavasal) and finally into the Pandya kingdom (Madurai, Ramanathapuram and Tirunelveli districts). Tamils broadly come under Digambara sect. It is believed that the Kalabhras were the patrons of Jainism.

Sittanavasal cave in Pudukkottai district is located on a prominent rock that stands 70 m above the ground. It has a natural cavern, known as Eladipattam, at one end, and a rock-cut cave temple at the other. Behind the fenced cavern, there are 17 rock beds marked on the floor. The stone berths aligned in rows are believed to have served as a Jain shelter. The largest of these ascetic beds contains a Tamil-Brahmi inscription that dates to the 2nd century B.C. There are more inscriptions in Tamil from the 8th century A.D., bearing the names of monks. It is believed that they should have spent their lives in isolation here. 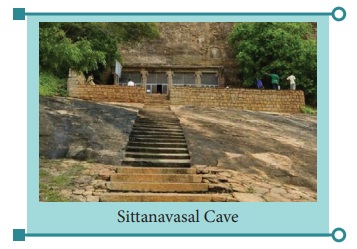 The Sittanavasal cave temple, named Arivar Koil, lies on the west off the hillock.

The facade of the temple is simple, with four rock-cut columns. Constructed in the early Pandya period, in the 7th century A.D. , it has a hall in the front called the Ardha-mandapam and a smaller cell at the rear, which is the garbha graha (sanctum sanctorum). 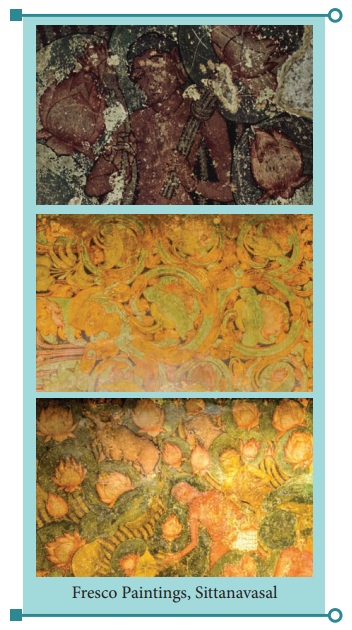 The murals in the temple resemble the frescoes of the famous Ajanta caves. The Archaeological Survey of India (ASI) took over the caves only in 1958. Thereafter it took two decades to cover the cave and regulate the entry of visitors. There are the bas- relief figures of Tirthankaras on the left wall of the hall and acharyas on the right before one enters the inner chamber, the sanctum sanctorum.

Jainism flourished during the Pallava reign. In hiswritings,Chinesetraveller Hiuen Tsang has mentioned about the presence of a large number of Buddhists andJains during his visit to the Pallava country in 7th century A.D. Most of the Pallava rulers were Jains. Mahendravarman was a Jain initially. The two Jain temples in Kanchipuram are Trilokyanatha Jinaswamy Temple at Tiruparuttikunram, on the banks of the river Palar, and the Chandra Prabha temple dedicated to the Tirtankara named Chandraprabha. The architecture of these temples is in Pallava style, but it has deteriorated in due course of time. During the Vijayanagar rule (1387), Irugappa, a disciple of Jaina-muni Pushpasena; and a minister of Vijayanagar King Harihara II (1377-1404), expanded the Trilokyanatha Temple by adding the Sangeetha mandapa. The grand murals were added only at this time. 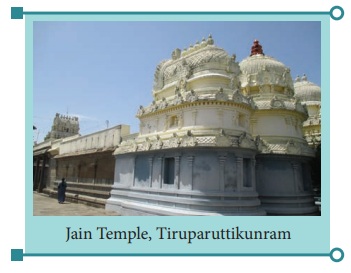 Mural paintings in the temples show scenes from the lives of Tirtankaras. Unfortunately the paintings of the Trilokyanatha temple at Tiruparuttikunram have been ruined by over-painting done during renovation. There is rich inscriptional evidence inside the second shrine, the Trikuda Basti, containing information on the development of the temple, and the contributions of various donors over the centuries. 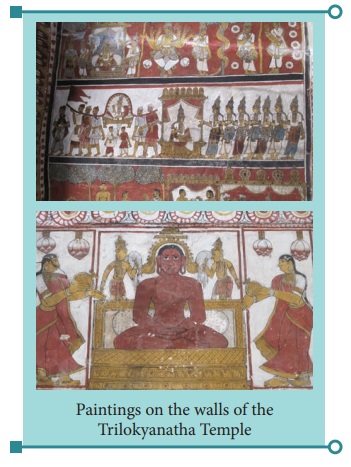 In the Kanchipuram district, apart from Tiruparuttikunram, Jain vestiges have been found over the years in many villages across the state.

The 8th centuryKazhugumalai temple in Kovilpatti taluk inThoothukudi district marks the revival of Jainism in Tamil Nadu.This cave temple was built by King Parantaka Nedunjadaiyan of the Pandyankingdom. Polished rock-cut cave beds, popularly known as Panchavar Padukkai at Kazhugumalai cavern host the figures of not only the Tirtankaras but also the figures of yakshas and yakshis (Male and Female attendants respectively). 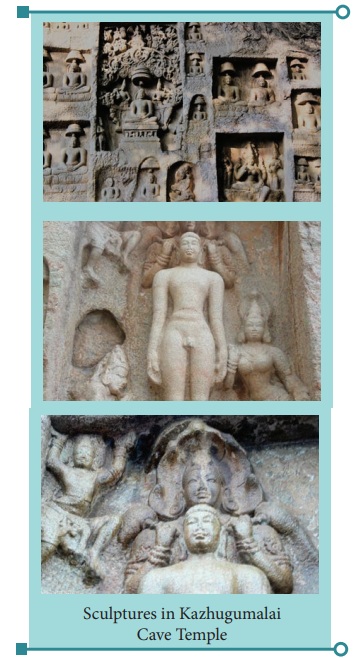 Jain Temples in other parts of Tamil NaduVellore

Fourteen Jain monk beds, dating back to the 5th century A.D., have been excavated inside three caverns on top of a hill in Vellore district. The beds are found at the Bhairavamalai in Latheri, Katpadi taluk, Vellore district. Of the three caverns, two of them house beds. One houses four rock beds while the other houses one bed. Unlike many rock beds found elsewhere, these ones have no head-rests.

Tirumalai is a Jain temple in a cave complex located near Arni town in Tiruvannamalai district in Tamil Nadu. The complex, dated to the 12th century A.D., includes three Jain caves, two Jain temples and a 16-metre-high sculpture of Neminatha, the 22nd Tirthankara. This image of Neminatha is considered to be the tallest Jain image in Tamil Nadu.

There are 26 caves, 200 stone beds, 60 inscriptions and over 100 sculptures in and around Madurai. The Kizha Kuyil Kudi is a striking example. This hillock is 12 kilometres west of Madurai, on the Madurai–Theni Highway. The sculptures are assigned to the period of Parantaka Veera Narayana Pandyan who ruled from A.D. 860 to 900. There are eight sculptures. The images of Rishab Nath or Adinath, Mahavira, Parshvanath and Bahubali are found here. 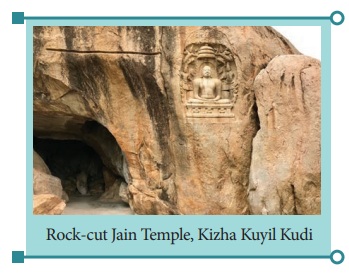 Jaina monasteries and temples also served as seats of learning. Education was imparted in these institutions to the people irrespective of caste and creed. The Jainas propagated their doctrines and proved to be a potential media of mass education. The Bhairavamalai we have mentioned earlier is situated near a small village called Kukkara Palli. ‘Palli’ is an educational centre of Jains and villages bearing the suffix of Palli are common in many places in Tamil Nadu.

The educational institutions had libraries attached to them. Several books were written by the preachers of Jainism, highlighting the important aspects of Jainism. The permission for women to enter into the order provided an impetus to the spread of education among women.