Buddha’s original name, Siddhartha Sakya-muni Gautama, if translated into English, would mean Gautama who belongs to the Sakya tribe and who has reached the goal of perfection. Gautama Buddha was a contemporary of Mahavira.

Buddha’s original name, Siddhartha Sakya-muni Gautama, if translated into English, would mean Gautama who belongs to the Sakya tribe and who has reached the goal of perfection. Gautama Buddha was a contemporary of Mahavira. His father ruled the tribe of Sakya in a region near the present-day Nepal. Gautama found that he had nothing to learn from the teachers of the old religions. The religions proclaimed that the only way to salvation was through living the life of an ascetic. But despite practicing asceticism, Gautama could not arrive anywhere near the truth. And one night, as he sat under a bodhi-tree struggling with his doubt and his loneliness, a great peace descended on him. He was no longer Gautama, the sceptic, but became Buddha, the Enlightened. At last, he had succeeded in understanding the great mystery of human suffering, its causes and its cure. Asserting that both the king (passion for pleasures) and the hermit (self-mortifications) were wrong, he discovered the middle path. The middle path is based on ‘an eight-fold path’ of Right understanding , Right thought, Right speech, Right action, Right livelihood, Right effort, Right mindfulness, Right concentration.

Buddha taught not the glory of God but the power of love. He held the view that all men are born to an ‘equality of rights’. He undertook long journeys and carried his message far and wide. Buddha preached his teachings in Prakrit. His four noble truths are as follows:

2. Suffering is caused by craving and aversion.

3. Suffering can be overcome and happiness attained.

4. True happiness and contentment are possible, if one pursues the eight-fold path.

Buddha’s teachings for a long time were transmitted through the memory of teachers and disciples. They were reduced to writing by 80 B.C. and were written in the Pali language. The Pali canon Tripitaka has three divisions, also known as the Threefold Basket. They include Vinaya Pitaka, Sutta Pitaka and Abhidhamma Pitaka.

Vinaya Pitaka contains the rules of the order of Buddhist monks, which must be observed for achieving purity of conduct.

Sutta Pitaka lays down the principles of religion by citing discourses as evidence.

Abhidhamma Pitaka is the latest of the Tripitaka.It deals with ethics, philosophy and meta-physics.Other prominent canonical literary works inBuddhism include:

Jatakas – various stories of the lives of the Buddha found in Buddhist literature.

Buddhavamsa – A legend in verse, containing a narration of the life and activities of the 24 Buddhas who are believed to have preceded Gautama. Apart from the above canonical literature, there is a long series of non-canonical literature in Pali. They include:

* Milindapanha – which means ‘questions of Milinda’. It contains a dialogue between Milinda, the Graeco-Bactrian king, and the monk Nagasena over some problems that faced Buddhism. It was originally written in Sanskrit.

* The two famous Ceylonese chronicles are Mahavamsa and Dipavamsa. The former deals with the royal dynasties of the Indian subcontinent including Sri Lanka, while the latter deals with the arrival of the Buddha’s teachings and preachers in Sri Lanka.

* Buddhagosha’s Visuddhimagga is a later work. He is the first Buddhist commentator.

* Sanskrit literature became prominent in Buddhism with the rise of Mahayana Buddhism. However, some of the Sanskritic works were produced by the Hinayana school as well. Buddhacharita, written by Asvaghosa, is an epic style Sanskrit work. It tells the life history of GautamaBuddha.

Buddhism is believed to have spread to the Tamil country by the Ceylonese missionaries. The evidence in support of this is some monuments of the Pandya country, which are assigned to the 3rd century B.C. (BCE). The monuments are in caverns known as Pancha Pandava Malai. Buddhism seems to have flourished and co-existed peacefully with Jainism, Ajivikam and also with various sects of Hinduism. Since the time of Bhakti Movement, Buddhism came to be challenged by its exponents and began to lose royal patronage. The Thevaram hymns of Saiva saints and the Nalayira Divyaprabandam of Vaishnava Azhwars provided evidence to the challenges Buddhism faced in Tamil country. When Hieun Tsang, the Chinese traveller, visited south India in the 7th century, Buddhism was almost on the decline.

But contrary to popular perception, the Buddhism did not disappear completely. The presence of Virasozhiyam (a 11th century Later Chola period grammar text, composed by a Buddhist) and the discovery of 13th century Buddhist bronzes in Nagapattinam testify to the presence of Buddhism in later periods. The sculptures of Buddha in Thiyaganur village in Salem district strengthen this conclusion. 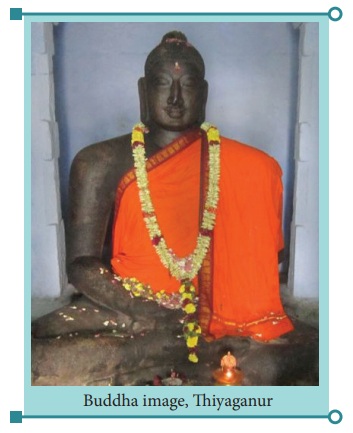 Though Buddhism faced challenges from Saiva and Vaishnava sects from the Pallava period onwards. One of the exceptions was Nagapattinam, which was supported by Chola kings, not for religious but for political reasons. Chudamani Vihara of Nagapattinam was constructed by the Srivijaya king with the patronage of Rajaraja Chola. This vihara has been since destroyed. The Tamil epic, Manimekalai, written by Kulavanigan Sithalai Sattanar, is considered a typical representation of Tamil Buddhism. Sattanar indigenised Buddhism into Tamil Buddhism by communicating a large set of Buddhist terms in Tamil, as translations from Sanskrit and Pali.

There is a record about a Buddhist monk named Vajrabodhi, who was skilled in tantric rituals, but this monk left the Pallava court for China. Mahendravarman’s Mattavilāsa Prahasana describes Buddhism as a religion in decay.

In the field of education, Buddhist Sanghas and Viharas served as centres of education. Students from various parts of the world came here to receive education. Nalanda, Taxila and Vikramshila gained reputation as great educational centres. They were originally Buddhist Viharas. Students from Tibet and China were influenced by Buddhism and they took effective steps to spread Buddhism.

A Vihara in Sanskrit means ‘dwelling’ or ‘house’. Originally, viharas were dwelling places used by wandering monks during the rainy season. Later they transformed into centres of learning through the donations of wealthy lay Buddhists. Royal patronage allowed pre-Muslim India to become a land of many viharas that imparted university education and were treasure troves of sacred texts. Many viharas, such as Nalanda were worldfamous. 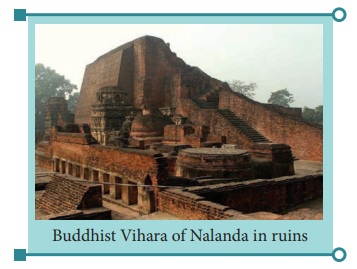 Excavations of Buddhist Vihara and a temple at Kaveripoompattinam and hundreds of stone and bronze sculptures by ASI from over 125 sites have proved the spread of the religion in the state. A 1.03 metre Buddha statue in 'padmasana' pose in remote Tirunattiyattankudi village in Tiruvarur district was unearthed when digging a tank in a field. 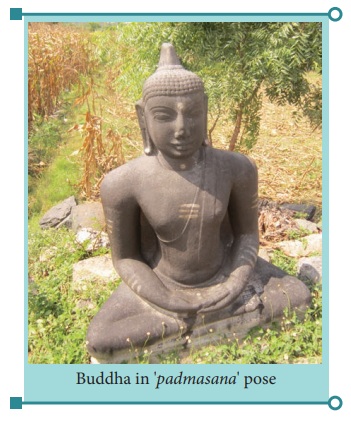