Because iron is important for the formation not only of hemoglobin but also of other essential elements in the body (e.g., myoglobin, cytochromes, cytochromeoxidase, peroxidase, catalase), it is important to under-stand the means by which iron is utilized in the body.

Transport and Storage of Iron. Transport, storage, andmetabolism of iron in the body are diagrammed in Figure 32–7 and can be explained as follows: When iron is absorbed from the small intestine, it immedi-ately combines in the blood plasma with a beta globulin, apotransferrin, to form transferrin, which is then transported in the plasma. The iron is loosely bound in the transferrin and, consequently, can be released to any tissue cell at any point in the body. Excess iron in the blood is deposited especially in the liver hepatocytes and less in the reticuloendothelial cells of the bone marrow. 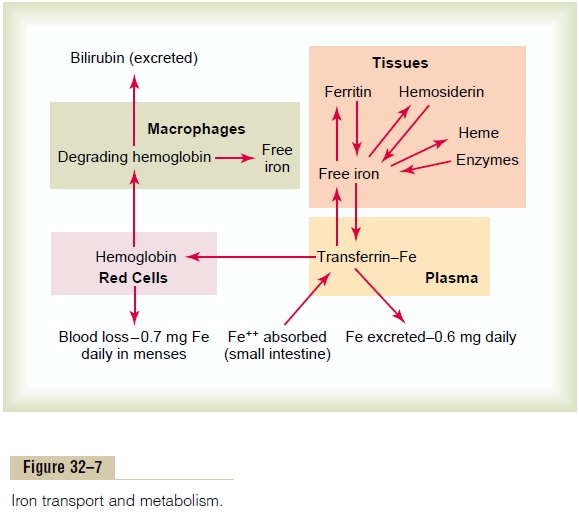 In the cell cytoplasm, iron combines mainly with a protein, apoferritin, to form ferritin. Apoferritin has a molecular weight of about 460,000, and varying quantities of iron can combine in clusters of iron radicals with this large molecule; therefore, ferritin may contain only a small amount of iron or a large amount. This iron stored as ferritin is called storage iron.

Smaller quantities of the iron in the storage pool are in an extremely insoluble form called hemosiderin. This is especially true when the total quantity of iron in the body is more than the apoferritin storage pool can accommodate. Hemosiderin collects in cells in the form of large clusters that can be observed micro-scopically as large particles. In contrast, ferritin parti-cles are so small and dispersed that they usually can be seen in the cell cytoplasm only with the electron microscope.

When the quantity of iron in the plasma falls low, some of the iron in the ferritin storage pool is removed easily and transported in the form of transferrin in the plasma to the areas of the body where it is needed. A unique characteristic of the transferrin molecule is that it binds strongly with receptors in the cell membranes of erythroblasts in the bone marrow. Then, along with its bound iron, it is ingested into the erythroblasts by endocytosis. There the transferrin delivers the iron directly to the mitochondria, where heme is synthe-sized. In people who do not have adequate quantities of transferrin in their blood, failure to transport iron to the erythroblasts in this manner can cause severe hypochromic anemia—that is, red cells that containmuch less hemoglobin than normal.

When red blood cells have lived their life span and are destroyed, the hemoglobin released from the cells is ingested by monocyte-macrophage cells. There, iron is liberated and is stored mainly in the ferritin pool to be used as needed for the formation of new hemoglobin.

Daily Loss of Iron. A man excretes about 0.6 milligramof iron each day, mainly into the feces. Additional quantities of iron are lost when bleeding occurs. For a woman, additional menstrual loss of blood brings long-term iron loss to an average of about 1.3 mg/day.

Absorption of Iron from the Intestinal Tract

Iron is absorbed from all parts of the small intestine, mostly by the following mechanism. The liver secretes moderate amounts of apotransferrin into the bile, which flows through the bile duct into the duodenum. Here, the apotransferrin binds with free iron and also with certain iron compounds, such as hemoglobin and myoglobin from meat, two of the most important sources of iron in the diet. This combination is called transferrin. It, in turn, is attracted to and binds withreceptors in the membranes of the intestinal epithelial cells. Then, by pinocytosis, the transferrin molecule, carrying its iron store, is absorbed into the epithelial cells and later released into the blood capillaries beneath these cells in the form of plasma transferrin.

Iron absorption from the intestines is extremely slow, at a maximum rate of only a few milligrams per day. This means that even when tremendous quantities of iron are present in the food, only small proportions can be absorbed.

Regulation of Total Body Iron by Controlling Rate of Absorption.