Anemia means deficiency of hemoglobin in the blood, which can be caused by either too few red blood cells or too little hemoglobin in the cells. Some types of anemia and their physiologic causes are the following.

In chronic blood loss, a person frequently cannot absorb enough iron from the intestines to form hemo-globin as rapidly as it is lost. Red cells are then pro-duced that are much smaller than normal and have too little hemoglobin inside them, giving rise to microcytic,hypochromic anemia, which is shown in Figure 32–3. 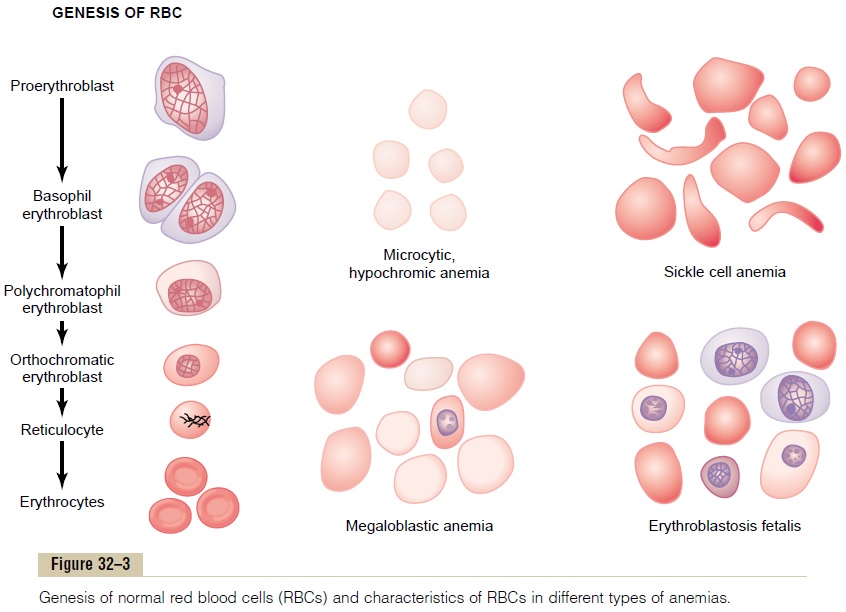 Aplastic Anemia. Bone marrow aplasiameans lack offunctioning bone marrow. For instance, a person exposed to gamma ray radiation from a nuclear bomb blast can sustain complete destruction of bone marrow, followed in a few weeks by lethal anemia. Likewise, excessive x-ray treatment, certain industrial chemicals, and even drugs to which the person might be sensitive can cause the same effect.

Megaloblastic Anemia. Based on the earlier discussionsof vitamin B12, folic acid, and intrinsic factor from the stomach mucosa, one can readily understand that loss of any one of these can lead to slow reproduction of erythroblasts in the bone marrow. As a result, the red cells grow too large, with odd shapes, and are called megaloblasts. Thus, atrophy of the stomach mucosa,as occurs in pernicious anemia,or loss of the entire stomach after surgical total gastrectomy can lead to megaloblastic anemia. Also, patients who have intes-tinal sprue, in which folic acid, vitamin B12, and other vitamin B compounds are poorly absorbed, often develop megaloblastic anemia. Because in these states the erythroblasts cannot proliferate rapidly enough to form normal numbers of red blood cells, those red cells that are formed are mostly oversized, have bizarre shapes, and have fragile membranes. These cells rupture easily, leaving the person in dire need of an adequate number of red cells.

Hemolytic Anemia. Different abnormalities of the redblood cells, many of which are hereditarily acquired, make the cells fragile, so that they rupture easily as they go through the capillaries, especially through the spleen. Even though the number of red blood cells formed may be normal, or even much greater than normal in some hemolytic diseases, the life span of the fragile red cell is so short that the cells are destroyed faster than they can be formed, and serious anemia results. Some of these types of anemia are the following.

In hereditary spherocytosis, the red cells are very small and spherical rather than being biconcave discs. These cells cannot withstand compression forces because they do not have the normal loose, baglike cell membrane structure of the biconcave discs. On passing through the splenic pulp and some other tight vas-cular beds, they are easily ruptured by even slight compression.

In sickle cell anemia, which is present in 0.3 to 1.0 per cent of West African and American blacks, the cells have an abnormal type of hemoglobin called hemo-globin S, containing faulty beta chains in the hemo-globin molecule. When this hemoglobin is exposed to low concentra-tions of oxygen, it precipitates into long crystals inside the red blood cell. These crystals elongate the cell and give it the appearance of a sickle rather than a bicon-cave disc. The precipitated hemoglobin also damages the cell membrane, so that the cells become highly fragile, leading to serious anemia. Such patients fre-quently experience a vicious circle of events called a sickle cell disease “crisis,” in which low oxygen tension in the tissues causes sickling, which leads to ruptured red cells, which causes a further decrease in oxygen tension and still more sickling and red cell destruction. Once the process starts, it progresses rapidly, eventu-ating in a serious decrease in red blood cells within a few hours and, often, death.

In erythroblastosis fetalis, Rh-positive red blood cells in the fetus are attacked by antibodies from an Rh-negative mother. These antibodies make the Rh-positive cells fragile, leading to rapid rupture and causing the child to be born with serious anemia. This is discussed in relation to the Rh factor of blood. The extremely rapid formation of new red cells to make up for the destroyed cells in erythro-blastosis fetalis causes a large number of early blast forms of red cells to be released from the bone marrow into the blood.

Effects of Anemia on Function of the Circulatory System

The viscosity of the blood, depends almost entirely on the blood con-centration of red blood cells. In severe anemia, the blood viscosity may fall to as low as 1.5 times that of water rather than the normal value of about 3. This decreases the resistance to blood flow in the periph-eral blood vessels, so that far greater than normal quantities of blood flow through the tissues and return to the heart, thereby greatly increasing cardiac output. Moreover, hypoxia resulting from diminished trans-port of oxygen by the blood causes the peripheral tissue blood vessels to dilate, allowing a further increase in the return of blood to the heart and increasing the cardiac output to a still higher level— sometimes three to four times normal. Thus, one of the major effects of anemia is greatly increased cardiacoutput, as well as increased pumping workload on the heart.

The increased cardiac output in anemia partially offsets the reduced oxygen-carrying effect of the anemia, because even though each unit quantity of blood carries only small quantities of oxygen, the rate of blood flow may be increased enough so that almost normal quantities of oxygen are actually delivered to the tissues. However, when a person with anemia begins to exercise, the heart is not capable of pumping much greater quantities of blood than it is already pumping. Consequently, during exercise, which greatly increases tissue demand for oxygen, extreme tissue hypoxia results, and acute cardiac failure ensues.