The term investment means purchase of stocks and shares, debentures, government bonds and equities. According to Keynes, it is only financial investment and not real investment. This type of investment does result in an addition to the stock of real capital of the nation.

In the views of Keynes, Investment includes expenditure on capital investment.

●  Investment that is not dependent on the national income

●  Mainly done with the welfare motive and not for making profits

●  Not affected by rise in raw materials or wages of workers

●  Essential to development of nation and out of depression

The autonomous investment curve is horizontal, parallel to X axis. 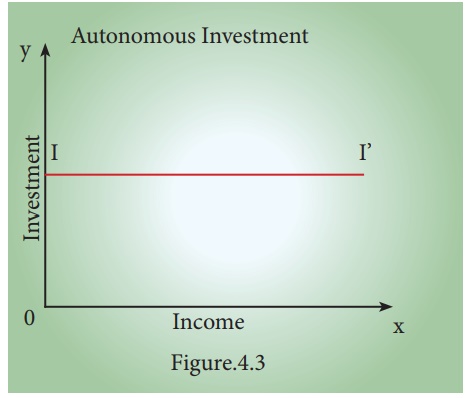 Generally, Government makes autonomous investment because of the welfare consideration.

Induced investment is the expenditure on fixed assets and stocks which are required when level of income and demand in an economy goes up. 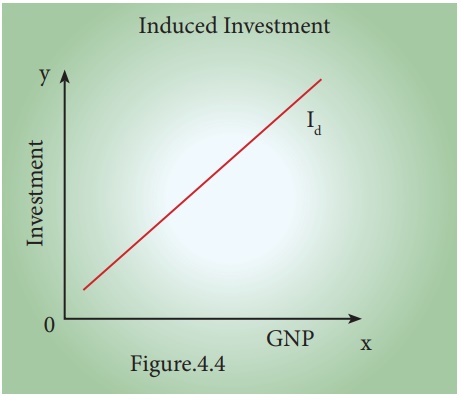 The classical economists believed that investment depended exclusively on rate of interest. In reality investment decision depends on a number of factors. They are as follows:

12.   Liquid assets of the investors

However, Keynes contended that business expectations and profits are more important in deciding investment. He also pointed out that investment depends on MEC (Marginal Efficiency of Capital) and rate of interest.

i. Private investment is an increase in the capital stock such as buying a factory or machine.

The marginal efficiency of capital (MEC) states the rate of return on an investment project. Specifically, it refers to the annual percentage yield (output) earned by the last additional unit of capital.

ii. If the marginal efficiency of capital is 5% and interest rates is 4%, then it is worth borrowing at 4% to get an expected increase in output of 5%.

4.  Relationship between rate of interest and Investment:

An explanation of how the rate of interest influences the level of investment in the economy. Typically, higher interest rates reduce investment, because higher rates increase the cost of borrowing and require investment to have a higher rate of return to be profitable. 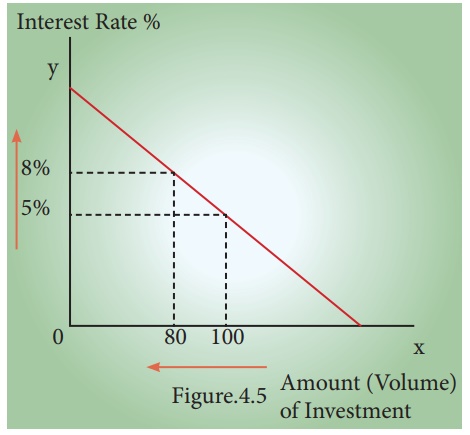 As the real cost of borrowing rises, fewer investment projects are profitable.

If interest rates are increased then it will tend to discourage investment because investment has a higher opportunity cost.

1. With higher rates, it is more expensive to borrow money from a bank.

2. Saving money in a bank gives a higher rate of return. Therefore, using savings to finance investment has an opportunity cost of lower interest payments.

If interest rates rise, firms will need to gain a better rate of return to justify the cost of borrowing using savings.

MEC was first introduced by J.M Keynes in 1936 as an important determinant of autonomous investment. The MEC is the expected profitability of an additional capital asset. It may be defined as the highest rate of return over cost expected from the additional unit of capital asset.

Meaning of Marginal Efficiency of Capital (MEC) is the rate of discount which makes the discounted present value of expected income stream equal to the cost of capital.

1. The prospective yield from a capital asset.

2. The supply price of a capital asset. 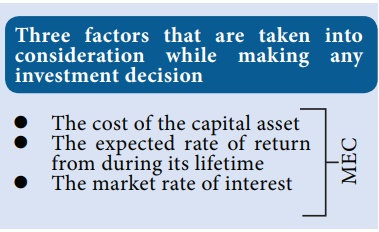 The marginal efficiency of capital is influenced by short - run as well as long-run factors. These factors are discussed in brief:

(i) Demand for the product: If the market for a particular good is expected to grow and its costs are likely to fall, the rate of return from investment will be high. If entrepreneurs expect a fall in demand for goods and a rise in cost, the investment will decline.

(ii) Liquid assets: If the entrepreneurs are holding large volume of working capital, they can take advantage of the investment opportunities that come in their way. The MEC will be high.

(iii) Sudden changes in income: The MEC is also influenced by sudden changes in income of the entrepreneurs. If the business community gets windfall profits, or tax concession the MEC will be high and hence investment in the country will go up. On the other hand, MEC falls with the decrease in income.

The  long  run factors which  influence the marginal efficiency of capital are as follows:

(iii) Monetary and Fiscal policies: Cheap money policy and liberal tax policy pave the way for greater profit margin and so MEC is likely to be high.

MEI is the expected rate of return on  investment  as  additional  units  of investment  are  made  under  specified conditions and over a period of time. When cost of borrowing is high, businesses are less motivated to borrow money and make investment on different projects because high  cost  of  borrowing  reduces  profit margin of the business firms; 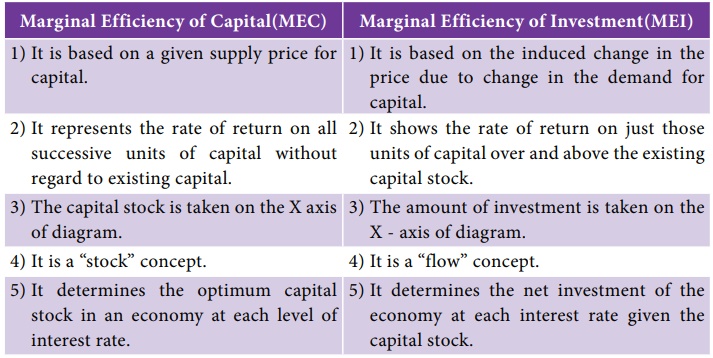 1) It is based on a given supply price for capital.

2) It represents the rate of return on all successive units of capital without regard to existing capital.

3) The capital stock is taken on the X axis of diagram.

5) It determines the optimum capital stock in an economy at each level of interest rate.

2) It shows the rate of return on just those units of capital over and above the existing capital stock.

3) The amount of investment is taken on the X - axis of diagram.

5) It determines the net investment of the economy at each interest rate given the capital stock.