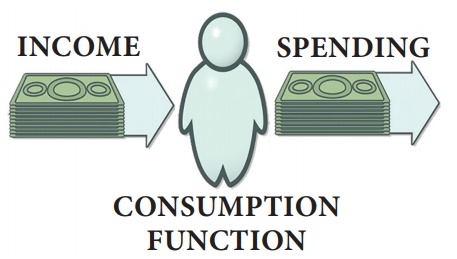 Symbolically, the relationship is represented as

In  fact,  consumption  function  is a schedule of the various amounts of consumption expenditure corresponding to different levels of income. A hypothetical consumption schedule is given in Table 1. 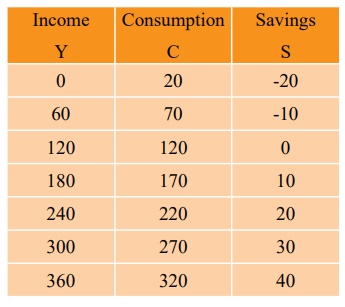 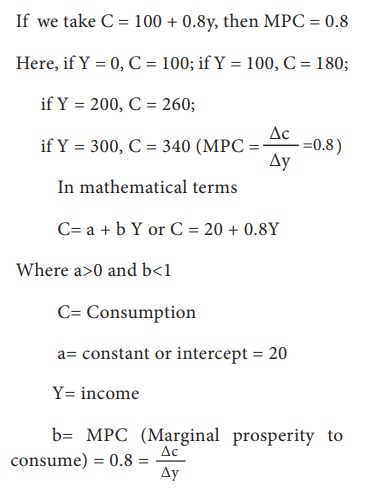 The above table shows that consumption is an increasing function of income because consumption expenditure increases with increase in income. Here it is shown that when income is zero, people spend out of their past savings on consumption because they must eat in order to live (Autonomous Consumption). 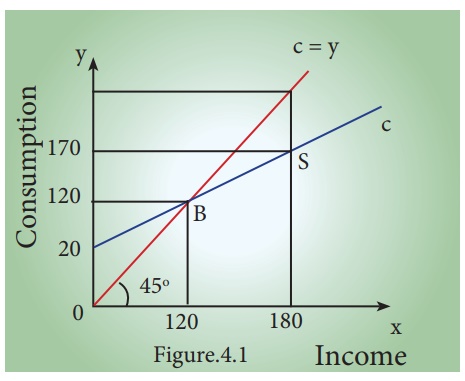 2.  Technical Attributes of the Consumption Function 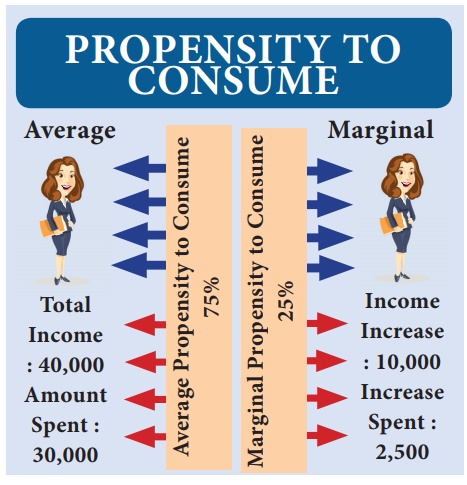 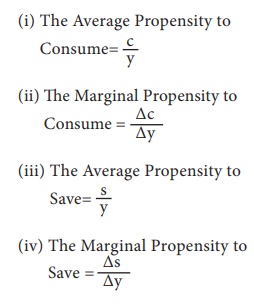 (1) The Average Propensity to Consume:

The average propensity to consume is the ratio of consumption expenditure to any particular level of income.” Algebraically it may be expressed as under:

(2) The Marginal Propensity to Consume:

The marginal propensity to consume may be defined as the ratio of the change in the consumption to the change in income. Algebraically it may be expressed as under:

MPC is positive but less than unity

The average propensity to save is the ratio of saving to income.

Marginal Propensity to Save is the ratio of change in saving to a change in income.

MPS is obtained by dividing change in savings by change in income. It can be expressed algebraically as

Generally the average ie APC is expressed in percentage and the MPC in fraction.

Keynes propounded the fundamental Psychological Law of Consumption which forms the basis of the consumption function. He stated that “The fundamental psychological law upon which we are entitled to depend with great confidence both prior from our knowledge of human nature and from the detailed facts of experience, is that men are disposed as a rule and on the average to increase their consumption as their income increases but not by as much as the increase in their income.” The law implies that there is a tendency on the part of the people to spend on consumption less than the full increment of income. 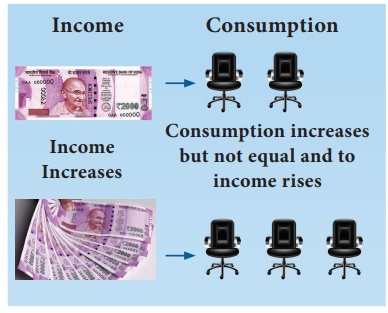 Keynes’s Law is based on the following assumptions:

The other variables such as income distribution, tastes, habits, social customs, price movements, population growth, etc. do not change and consumption depends on income alone.

The law holds good under normal conditions. If, however, the economy is faced with abnormal and extraordinary circumstances like war, revolution or hyperinflation, the law will not operate. People may spend the whole of increased income on consumption.

3. Existence of a Laissez-faire Capitalist Economy:

The law operates in a rich capitalist economy where there is no government intervention. People should be free to spend increased income. In the case of regulation of private enterprise and consumption expenditures by the State, the law breaks down.

Propositions of the Law:

This law has three propositions: 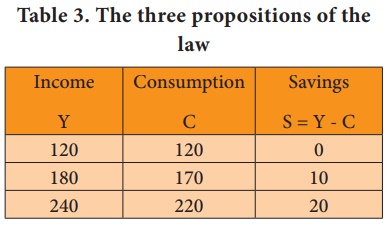 Income increases by ₹ 60 crores and the increase in consumption is by ₹ 50 crores.

The increased income of ₹ 60 crores in each case is divided in some proportion between consumption and saving respectively. (i.e., ₹ 50crores and ₹ 10 crores).

As income increases consumption as well as saving increase. Neither consumption nor saving has fallen.

Diagrammatically, the three propositions are explained in Figure 4.2. Here, income is measured horizontally and consumption and saving are measured on the vertical axis. С is the consumption function curve and 45° line represents income consumption equality. 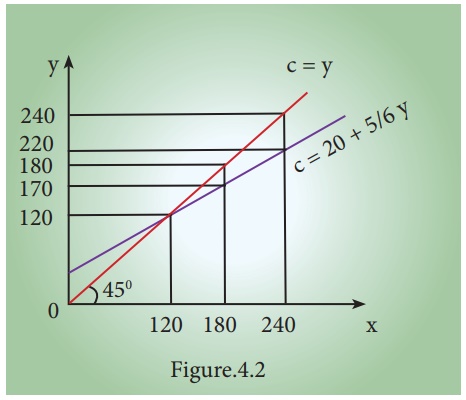 Increases in income to 180 and 240 lead to increased consumption 170 and 220 and increased saving 20 and 10 than before. It is clear from the widening area below the С curve and the saving gap between 45° line and С curve.

Keynes lists eight motives which lead individuals to refrain from spending, they are:

1. The motive of precaution: To build up a reserve against unforeseen contingencies. Eg. Accidents, sickness

2. The motive of foresight: The desire to provide for anticipated future needs. Eg. Old age

3. The motive of calculation: The desire to enjoy interest and appreciation.

4. The motive of improvement: The desire to enjoy for improving standard of living.

5. The motive of financial independence.

6. The motive of enterprise (desire to do forward trading).

7. The motive of pride.(desire to bequeath a fortune)

8. The motive of avarice.(purely miserly instinct)

The Government, institutions and business corporations and firms may also consume mainly because of the following four motives:

1. The motive of enterprise: The desire to obtain resources to carry out further capital investment without incurring debt.

2. The motive of liquidity: The desire to secure liquid resources to meet emergencies, and difficulties.

3. The motive of improvement: The desire to secure a rising income and to demonstrate successful management.

4. The  motive  of  financial  prudence:

The desire to ensure adequate financial provision against depreciation and obsolescence and to discharge debt.

According to Keynes, the subjective factors do not change in the short run and hence consumption function remains stable in the short period.

Objective factors are the external factors which are real and measurable. These factors can be easily changed in the long run. Major objective factors influencing consumption function are:

Price level plays an important role in determining the consumption function. When the price falls, real income goes up; people will consume more and propensity to save of the society increases.

Wage level plays an important role in determining the consumption function and there is positive relationship between wage and consumption. Consumption expenditure increases with the rise in wages. Similar is the effect with regard to windfall gains.

The availability of consumer credit at easy installments will encourage households to buy consumer durables like automobiles, fridge, computer. This pushes up consumption.

Duesenberry has made two observations regarding the factors affecting consumption. 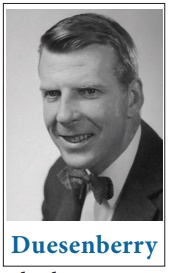 Unexpected changes in the stock market leading to gains or losses tend to shift the consumption function upward or downward.