One of the two most publicized threats to security is the intruder (the other is viruses), often referred to as a hacker or cracker. In an important early study of intrusion, Anderson [ANDE80] identified three classes of intruders:

One of the two most publicized threats to security is the intruder (the other is viruses), often referred to as a hacker or cracker. In an important early study of intrusion, Anderson [ANDE80] identified three classes of intruders:

•                           Clandestine user: An individual who seizes supervisory control of the system and uses this control to evade auditing and access controls or to suppress audit collection

The masquerader is likely to be an outsider; the misfeasor generally is an insider; and the clandestine user can be either an outsider or an insider.

Intruder attacks range from the benign to the serious. At the benign end of the scale, there are many people who simply wish to explore internets and see what is out there. At the serious end are individuals who are attempting to read privileged data, perform unauthorized modifications to data, or disrupt the system.

HACKERS Traditionally, those who hack into computers do so for the thrill of it or for status. The hacking community is a strong meritocracy in which status is determined by level of competence. Thus, attackers often look for targets of opportunity and then share the information with others. A typical example is a break-in at a large financial institution reported in [RADC04]. The intruder took advantage of the fact that the corporate network was running unprotected services, some of which were not even needed. In this case, the key to the break-in was the pcAnywhere application. The manufacturer, Symantec, advertises this program as a remote control solution that enables secure connection to remote devices. But the attacker had an easy time gaining access to pcAnywhere; the administrator used the same three-letter username and password for the program. In this case, there was no intrusion detection system on the 700-node corporate network. The intruder was only discovered when a vice president walked into her office and saw the cursor moving files around on her Windows workstation.

Table 20.1 Some Examples of Intruder Patterns of Behavior 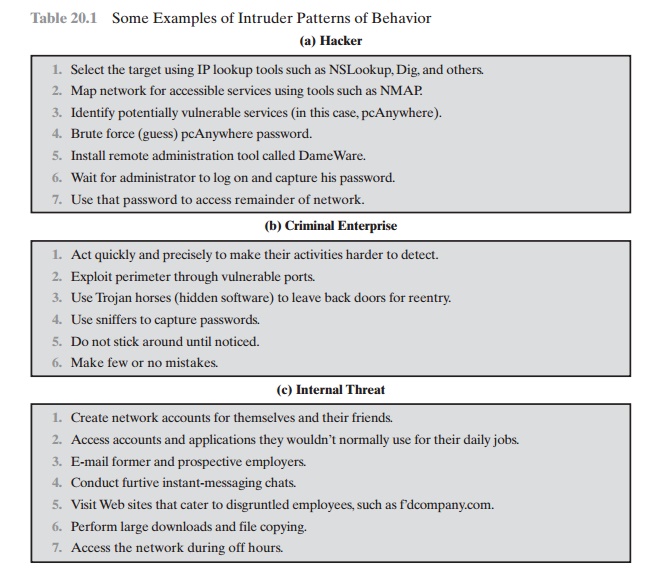 Benign intruders might be tolerable, although they do consume resources and may slow performance for legitimate users. However, there is no way in advance to know whether an intruder will be benign or malign. Consequently, even for systems with no particularly sensitive resources, there is a motivation to control this problem. Intrusion detection systems (IDSs) and intrusion prevention systems  (IPSs)

are designed to counter this type of hacker threat. In addition to using such systems, organizations can consider restricting remote logons to specific IP addresses and/or use virtual private network technology.

One of the results of the growing awareness of the intruder problem has been the establishment of a number of computer emergency response teams (CERTs). These cooperative ventures collect information about system vulnerabilities and disseminate it to systems managers. Hackers also routinely read CERT reports. Thus, it is important for system administrators to quickly insert all software patches to discovered vulnerabilities. Unfortunately, given the complexity of many IT systems, and the rate at which patches are released, this is increasingly difficult to achieve without automated updating. Even then, there are problems caused by incompatibilities resulting from the updated software. Hence the need for multiple layers of defense in managing security threats to IT systems.

CRIMINALS Organized groups of hackers have become a widespread and common threat to Internet-based systems. These groups can be in the employ of a corpo- ration or government but often are loosely affiliated gangs of hackers. Typically, these gangs are young, often Eastern European, Russian, or southeast Asian hackers who do business on the Web [ANTE06]. They meet in underground forums with names like DarkMarket.org and theftservices.com to trade tips and data and coordinate attacks. A common target is a credit card file at an e-commerce server. Attackers attempt to gain root access. The card numbers are used by organized crime gangs to purchase expensive items and are then posted to carder sites, where others can access and use the account numbers; this obscures usage patterns and complicates investigation.

Whereas traditional hackers look for targets of opportunity, criminal hackers usually have specific targets, or at least classes of targets in mind. Once a site is pene- trated, the attacker acts quickly, scooping up as much valuable information as possi- ble and exiting.

IDSs and IPSs can also be used for these types of attackers, but may be less effective because of the quick in-and-out nature of the attack. For e-commerce sites, database encryption should be used for sensitive customer information, espe- cially credit cards. For hosted e-commerce sites (provided by an outsider service), the e-commerce organization should make use of a dedicated server (not used to support multiple customers) and closely monitor the provider’s security services.

INSIDER ATTACKS Insider attacks are among the most difficult to detect and prevent. Employees already have access and knowledge about the structure and content of corporate databases. Insider attacks can be motivated by revenge or simply a feeling of entitlement. An example of the former is the case of Kenneth Patterson, fired from his position as data communications manager for American Eagle Outfitters. Patterson disabled the company’s ability to process credit card purchases during five days of the holiday season of 2002. As for a sense of entitlement, there  have always been many employees who felt entitled to take extra office supplies for home use, but this now extends to corporate data. An example is that of a vice president of sales for a stock analysis firm who quit to go to a competitor. Before she left, she copied the customer database to take with her. The offender reported feeling no animus toward her former employee; she simply wanted the data because it would be useful to her.

Although IDS and IPS facilities can be useful in countering insider attacks, other more direct approaches are of higher priority. Examples include the following:

In this section, we look at the techniques used for intrusion. Then we examine ways to detect intrusion.

The objective of the intruder is to gain access to a system or to increase the range of privileges accessible on a system. Most initial attacks use system or software vulner- abilities that allow a user to execute code that opens a back door into the system. Alternatively, the intruder attempts to acquire information that should have been protected. In some cases, this information is in the form of a user password. With knowledge of some other user’s password, an intruder can log in to a system and exercise all the privileges accorded to the legitimate user.

Typically, a system must maintain a file that associates a password with each authorized user. If such a file is stored with no protection, then it is an easy matter to gain access to it and learn passwords. The password file can be protected in one of two ways:

If one or both of these countermeasures are in place, some effort is needed for a potential intruder to learn passwords. On the basis of a survey of the literature and interviews with a number of password crackers, [ALVA90] reports the following techniques for learning passwords:

1.                        Try default passwords used with standard accounts that are shipped with the system. Many administrators do not bother to change these defaults.

The first six methods are various ways of guessing a password. If an intruder has to verify the guess by attempting to log in, it is a tedious and easily countered means of attack. For example, a system can simply reject any login after three password attempts, thus requiring the intruder to reconnect to the host to try again. Under these circum- stances, it is not practical to try more than a handful of passwords. However, the intruder is unlikely to try such crude methods. For example, if an intruder can gain access with a low level of privileges to an encrypted password file, then the strategy would be to capture that file and then use the encryption mechanism of that particular system at leisure until a valid password that provided greater privileges was discovered. Guessing attacks are feasible, and indeed highly effective, when a large num-

ber of guesses can be attempted automatically and each guess verified, without the guessing process being detectable. Later in this chapter, we have much to say about thwarting guessing attacks.

The seventh method of attack listed earlier, the Trojan horse, can be particularly difficult to counter. An example of a program that bypasses access controls was cited in [ALVA90]. A low-privilege user produced a game program and invited the system operator to use it in his or her spare time. The program did indeed play a game, but in the background it also contained code to copy the password file, which was unen- crypted but access protected, into the user’s file. Because the game was running under the operator’s high-privilege mode, it was able to gain access to the password file.

The eighth attack listed, line tapping, is a matter of physical security.

Other intrusion techniques do not require learning a password. Intruders can get access to a system by exploiting attacks such as buffer overflows on a program that runs with certain privileges. Privilege escalation can be done this way as well.

We turn now to a discussion of the two principal countermeasures: detection and prevention. Detection is concerned with learning of an attack, either before or after its success. Prevention is a challenging security goal and an uphill battle at all times. The difficulty stems from the fact that the defender must attempt to thwart all possible attacks, whereas the attacker is free to try to find the weakest link in the defense chain and attack at that point.