Intravenous fluid therapy may consist of infusions of crystalloids, colloids, or a combination of both.

Intravenous fluid therapy may consist of infusions of crystalloids, colloids, or a combination of both. Crystalloid solutions are aqueous solutions of ions (salts) with or without glucose, whereas colloid solu-tions also contain high-molecular-weight substances such as proteins or large glucose polymers. Colloid solutions help maintain plasma colloid oncotic pres-sure  and for the most part remain intravascular, whereas crystalloid solutions rapidly equilibrate with and distribute throughout the entire extracellular fluid space.

Controversy exists regarding the use of colloid versus crystalloid fluids for surgical patients. Propo-nents of colloids justifiably argue that by maintaining plasma oncotic pressure, colloids are more efficient (ie, a smaller volume of colloids than crystalloids is required to produce the same effect) in restoring normal intravascular volume and cardiac output. Crystalloid proponents, on the other hand, maintain that the crystalloid solutions are equally effective when given in appropriate amounts. Concerns that colloids may enhance the formation of pulmonary edema f luid in patients with increased pulmonary capillary permeability appear to be unfounded . Several generalizations can be made:

·        Crystalloids, when given in sufficient amounts, are just as effective as colloids in restoring intravascular volume.

·        Surgical patients may have an extracellular fluid deficit that exceeds the intravascular deficit.

Crystalloids are usually considered as the initial resuscitation fluid in patients with hemorrhagic and septic shock, in burn patients, in patients with head injury (to maintain cerebral perfusion pressure), and in patients undergoing plasmapheresis and hepatic resection. Colloids may be included in resuscitation efforts following initial administration of crystalloid solutions depending upon anesthesia provider pref-erences and institutional protocols.

A wide variety of solutions is available (Table 51–2), and choice is according to the type of 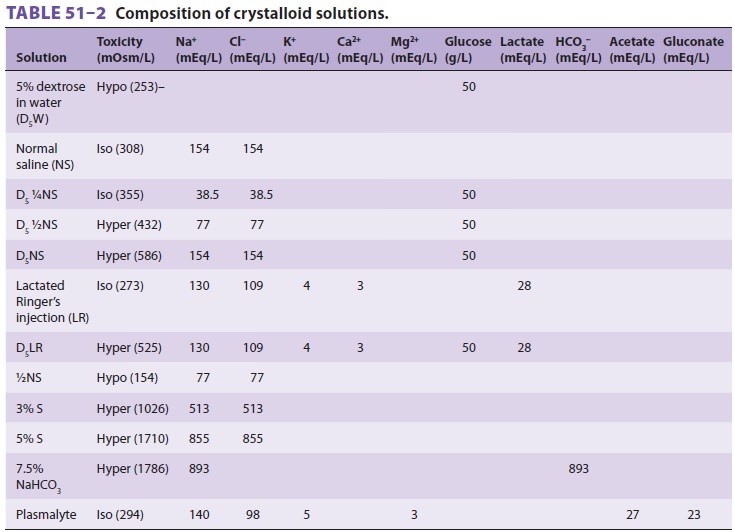 Because most intraoperative fluid losses are iso-tonic, replacement-type solutions are generally used. The most commonly used fluid is lactated Ringer’s solution. Although it is slightly hypotonic, provid-ing approximately 100 mL of free water per liter and tending to lower serum sodium, lactated Ringer’s generally has the least effect on extracellular fluid composition and appears to be the most physiologi-cal solution when large volumes are necessary. The lactate in this solution is converted by the liver into bicarbonate. When given in largevolumes, nor-mal saline produces a dilutional hyperchloremic acidosis because of its high sodium and chloride content (154 mEq/L): plasma bicarbonate con-centration decreases as chloride concentration increases. Normalsalineis thepreferred solutionforhypochloremic metabolic alkalosis and for diluting packed red blood cells prior to transfusion. Five per-cent dextrose in water (D5W) is used for replacement of pure water deficits and as a maintenance fluid for patients on sodium restriction. Hypertonic 3% saline is employed in therapy of severe symptomatic hypo-natremia . Hypotonic solutions must be administered slowly to avoid inducing hemolysis.

The osmotic activity of the high-molecular-weight substances in colloids tends to maintain these solutions intravascularly. Although the intravascu-lar half-life of a crystalloid solution is20–30 min, most colloid solutions have intravascu-lar half-lives between 3 and 6 h. The relatively greater cost and occasional complications associated with colloids may limit their use. Generally accepted indications for colloids include (1) f luid resuscita-tion in patients with severe intravascular fluid deficits (eg, hemorrhagic shock) prior to the arrival of blood for transfusion, and (2) fluid resuscitation in the presence of severe hypoalbuminemia or con-ditions associated with large protein losses such as burns. For burn patients, colloids are not included in most initial resuscitation protocols (and we strongly recommend that burn surgeons and anesthesia per-sonnel develop a resuscitation protocol and follow it), but may be considered following initial resuscita-tion with more extensive burn injuries during subse-quent operative procedures.

Several colloid solutions are generally available. All are derived from either plasma proteins or syn-thetic glucose polymers and are supplied in isotonic electrolyte solutions.

Blood-derived colloids include albumin (5% and 25% solutions) and plasma protein fraction (5%). Both are heated to 60°C for at least 10 h to minimize the risk of transmitting hepatitis and other viral diseases. Plasma protein fraction contains α-and β-globulins in addition to albumin and has occasionally resulted in hypotensive reactions. These reactions are allergic in nature and may involve acti-vators of prekallikrein.

Synthetic colloids include dextrose starches and gelatins. Gelatins are associated with histamine-mediated allergic reactions and are not available in the United States. Dextran is available as dextran (Macrodex) and dextran 40 (Rheomacrodex), which have average molecular weights of 70,000 and 40,000, respectively. Although dextran 70 is a better volume expander than dextran 40, the latter also improves blood flow through the microcircu-lation, presumably by decreasing blood viscosity, and is often administered to take advantage of these rheological properties rather than to meet “fluid requirements.” Antiplatelet effects are also described for dextrans. Infusions exceeding 20 mL/kg per day can interfere with blood typing, may prolong bleed-ing time, and have been associated with kidney fail-ure. Dextrans can also be antigenic, and both mild and severe anaphylactoid and anaphylactic reactions are described. Dextran 1 (Promit) may be adminis-tered prior to dextran 40 or dextran 70 to prevent severe anaphylactic reactions; it acts as a hapten and binds any circulating dextran antibodies.

Hetastarch (hydroxyethyl starch) is available in multiple formulations, which are designated by concentration, molecular weight, degree of starch substitution (on a molar basis), and ratio of hydrox-ylation between the C2 and the C6 positions. Thus in some countries a wide variety of formulations are available with concentrations between 6% and 10%, molecular weights between 200 and 670, and degree of molar substitution between 0.4 and 0.7. A greater ratio of C2 versus C6 substitution leads to longer per-sistence in plasma. The starch molecules are derived from plants. Smaller starch molecules are eliminated by the kidneys, whereas large molecules must first be broken down by amylase. Hetastarch is highly effec-tive as a plasma expander and is less expensive than albumin. Moreover, hetastarch is nonantigenic, and anaphylactoid reactions are rare. Coagulation stud-ies and bleeding times are generally not significantly affected following infusions of older, higher molecu-lar weight formulations up to 1.0 L in adults. Newer, lower molecular weight formulations can safely be given in larger volumes.