Intermediate long-term memories may last for many minutes or even weeks. They will eventually be lost unless the memory traces are activated enough to become more permanent; then they are classified as long-term memories. Experiments in primitive animals have demonstrated that memories of the intermediate long-term type can result from temporary chemical or physical changes, or both, in either the synapse presy-naptic terminals or the synapse postsynaptic mem-brane, changes that can persist for a few minutes up to several weeks. These mechanisms are so important that they deserve special description.

Figure 57â€“9 shows a mechanism of memory studied especially by Kandel and his colleagues that can cause memories lasting from a few minutes up to 3 weeks in the large snail Aplysia. In this figure, there are two synaptic terminals. One terminal is from a sensory input neuron and terminates directly on the surface of the neuron that is to be stimulated; this is called thesensory terminal. The other terminal is a presynaptic ending that lies on the surface of the sensory terminal,and it is called thefacilitator terminal. When the sensory terminal is stimulated repeatedly but without stimulation of the facilitator terminal, signal transmis-sion at first is great, but it becomes less and less intense with repeated stimulation until transmission almost ceases. This phenomenon is habituation, as was explained previously. It is a type of negative memory that causes the neuronal circuit to lose its response to repeated events that are insignificant. 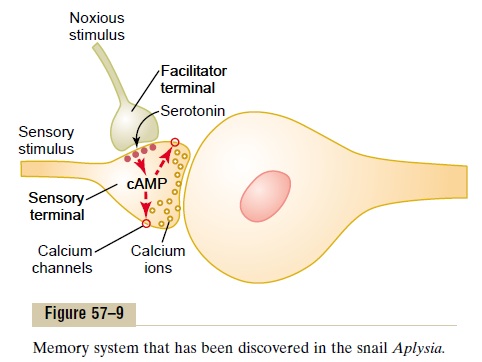 Conversely, if a noxious stimulus excites the facili-tator terminal at the same time that the sensory ter-minal is stimulated, then instead of the transmitted signal into the postsynaptic neuron becoming pro-gressively weaker, the ease of transmission becomes stronger and stronger; and it will remain strong for minutes, hours, days, or, with more intense training, up to about 3 weeks even without further stimulation of the facilitator terminal. Thus, the noxious stimulus causes the memory pathway through the sensory terminal to becomefacilitated for days or weeks thereafter. It is especially interesting that even after habituation has occurred, this pathway can be con-verted back to a facilitated pathway with only a few noxious stimuli.

Molecular Mechanism of Intermediate Memory Mechanism for Habituation. At the molecular level,the habituation effect in the sensory terminal results from progressive closure of calcium channels through the terminal membrane, though the cause of this calcium channel closure is not fully known. Neverthe-less, much smaller than normal amounts of calcium ions can diffuse into the habituated terminal, and much less sensory terminal transmitter is therefore released because calcium entry is the principal stim-ulus for transmitter release.

Mechanism for Facilitation. In the case of facilitation,at least part of the molecular mechanism is believed to be the following:

3.The cyclic AMP activates a protein kinase that causes phosphorylation of a protein that itself is part of the potassium channels in the sensory synaptic terminal membrane; this in turn blocks the channels for potassium conductance. The blockage can last for minutes up to several weeks.

Thus, in a very indirect way, the associative effect of stimulating the facilitator terminal at the same time that the sensory terminal is stimulated causes pro-longed increase in excitatory sensitivity of the sensory terminal, and this establishes the memory trace. Studies by Byrne and colleagues, also in the snail Aplysia, have suggested still another mechanism of synaptic memory. Their studies have shown that stimuli from separate sources acting on a single neuron, under appropriate conditions, can cause long-term changes inmembraneproperties of the post-synaptic neuron instead of in thepresynaptic neuronal membrane, but leading to essen-tially the same memory effects.