• To know about the interior of the earth

• To understand the role of plates

• To learn about earthquakes and volcanoes

The earth, our homeland, is a dynamic planet. The earth’s surface has lofty mountains, high plateaus, large plains and deep valleys etc. The earth’s surface is constantly undergoing changes inside and outside. Have you ever wondered what lies in the interior of the earth? What is the earth made up of?

The structure of the earth may be compared to that of an apple. The earth too has shells like that of an apple. If we cut a section through the earth, we will get a view as shown in figure. On the basis of the study of earthquake waves the spherical earth is found to be three concentric layers. They are:

The crust is the outermost layer of the earth. Its average thickness varies from 5 to 30 km. It is about 35 km on the continental masses and only 5 km on the ocean floors. Despite greater thickness, the continental crust is less dense than the oceanic crust because it is made of both light and dense rock types. The oceanic crust is composed mostly of dense rocks such as basalt.

Earth is called as bluePlanet. 71% of the earthis covered by water.

The crust comprises two of distinct parts. The upper part consists of granite rocks and forms the continents. It has the main mineral constituents of silica and alumina. So it is collectively referred to as Sial. It has an average density of 2.7g/cm3.

The lower part is a continuous zone of denser basaltic rocks forming the ocean floors, comprising mainly of silica and magnesium. It is therefore called Sima. It has an average density of 3.0g/cm3. The sial and the sima together form the earth’s crust. Since the sial is lighter than the sima, the continents can be said to be ‘floating’ on a sea of denser sima. 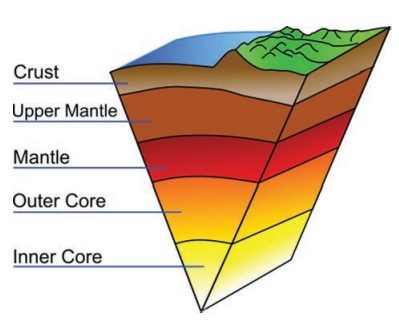 The innermost layer of the earth is called the core. It is also known as barysphere. It is separated from the mantle by a boundary called Weichart-Gutenberg discontinuity. The core is also divided into two parts. (i) The outer core, which is rich in iron, is in liquid state. It extends between 2,900 – 5,150 km. (ii) The inner core, composed of Nickel and Ferrous (Nife), is solid in state. The central core has very high temperature and pressure. It extends from 5,150 km to 6,370 km. The average density of core is 13.0 g/cm3

The crust forms only 1 percent of the volume of theearth, 84 % consists of themantle and 15 % makes thecore.• The radius of the earth is 6371 km.