1. Ghiyas-ud-dir was the founder of Tughluq dynasty.

2. Muhammad–bin-Tughluq shifted his capital from Delhi to Devagiri.

5. The threat of Mongols under Chengizkhan to India was during the reign of Iltumish.

Qutb-ud-din Aibak died of injuries received during an accidental full from a horse while playing polo.

2. Razia was an able and brave fighter. - True

3. The Turkish nobles chose Iltutmish, son of Aibak, as Sultan after the death of Aibak. – False

The Turkish nobles chose Iltutmish, son-in-law of Aibak, as Sultan after the death of Aibak.

4. FirozShah Tughluq refused to accept an invitation from a Bahmani Prince to intervene in the affairs of the Deccan. – True

V. Match the statement with the reason.Tick the appropriate answer

Reason:- (R) The Mongol ruler, a grandson of Chengiz Khan, assured that Mongols would not advance beyond Sutlej.

a) R is the correct explanation of A.

b) R is not the correct explanation of A.

d) A is wrong and R is the correct.

Answer: a) R is the correct explanation of A.

b) Find out the correct pair

1. After Ghori’s death in 1206, his slave Qutb-ud-din Aibak proclaimed him self the ruler of the Turkish territories in India.

2. Razia established the department of spies to gather intelligence about the conspirators and the trouble makers against her rule.

3. Balban built forts to guard his empire against the Mongol attack.

Wrong statement: 2. Razia established the department of spies to gather intelligence about the conspirators and the trouble makers against her rule.

VI. Answer the following in one or two sentences

1. Name the land granted to army officials in lieu of a regular wage.

2. Who founded the city of Agra?

4. Write a note on chahalgani.

In order to counter the possible attack of the Mongols, Iltutmish organised Turkish nobility into a select group of 40 nobles known as chahalgani or The Forty.

5. How did Ala-ud-din Khalji consolidate the Delhi Sultanate?

Ala-ud-din Khalji consolidated the Delhi Sultanate, The range of his conquests is impressive: in the Punjab (against the Mongols), in Rajasthan and in Gujarat. With his northern frontiers secure, he sent his chief lieutenant Malik Kafur into the southern parts who took even the distant Madurai in 1310.

Firoz Shah Tughluq created charities to aid poor Muslims, built colleges, mosques, and hospitals. He adopted many humanitarian measures. He banned inhuman punishments and abolished taxes not recognised by Muslim law. He promoted agriculture by waiving off the debts of the agriculturalists and constructing many canals for irrigation.

The sacking and massacre by Tamerlane or Timur of Delhi came a decade after Firuz Shah Tughluq died. As a ruler of the region around Samarkand in Central Asia, Timur had occupied some parts in the north-west of India. Taking advantage of India's weakness, he entered India in December 1398 and plundered Delhi. Punjab, besides the Delhi city, was the province that suffered most by Timur's raid. Timur, apart from carrying huge wealth in the form or gold, silver, jewels, also took along indian artisans like carpenters and masons to work on monuments in Samarkand.

1. How would you evaluate Muhammad-bin-Tughluq as Sultan of Delhi?

Muhammad-bin-Tyghluq was a learned man. In contrast, Muhammad Tughluq dreamt of making the whole of the subcontinent his domain. With the view to facilitating extended sovereignty, he shifted his capital from Delhi to the centre of the kingdom, namely Devagiri. He also changed its name to Daulatabad. When Muhammad himself decided that the move was a mistake, he ordered a return to Delhi as the capital again. When Ibn Battuta, the Morocco traveller who was with the Sultan, returned to Delhi, he found Delhi 'empty, abandoned and had but a small population'.

Tughluq changed the Ala-ud-din's system of revenue collections in grain and ordered that land revenue, which was increased, should henceforward be collected in money. This proved disastrous during famines. When he discovered that the stock of coins and silver was inadequate for minting, he issued a token currency in copper. Counterfeiting soon became order of the day and, as a result, the entire revenue system collapsed. Trade suffered as foreign merchants stopped business. This forced Sultan to withdraw the token currency and pay gold and silver coins in exchange. This move led the state to become bankrupt. Tughluq increased land tax in the Doab region, which triggered peasant revolts. As the revolts were cruelly dealt with, peasants abandoned cultivation, which resulted in the outbreak of frequent famines.

On the river map of India draw the extent of Tughluq Dynasty and mark the following places. 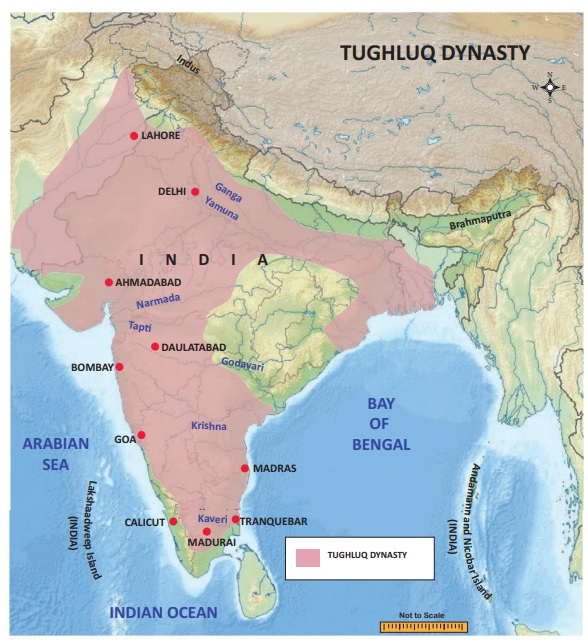 1. Match the Father with Son

2. Prepare an album of pictures of Islamic art and architecture of the Delhi Sultanate .