A sudden movement of a portion of the earth’s crust which produces a shaking or trembling is known as an earthquake. Earthquakes may cause widespread damage to life and property. 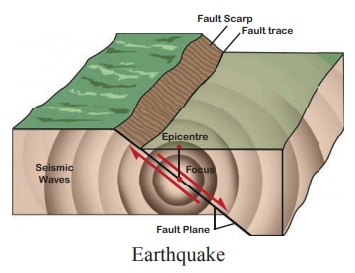 The earthquake waves are recorded by an instrument known as seismograph. The magnitude of an earthquake is measured by the Richter scale. The numbers on this scale range from 0 to 9.

The chief cause of earthquake is the sudden slipping of the portion of the earth’s crust along fractures or faults. The movement of the molten rocks underneath the surface produce strains which break the rocks apart. The sudden shifting of landmass causes upheavals in the crust of the earth sending vibrations or waves into the surrounding portions of the earth. Sometimes the surface of the earth itself cracks.

Another cause of earthquake is volcanic activity. A violent or explosive eruption often causes the earth in its vicinity to quake. Earthquakes are often common in most volcanic areas.

Earthquakes may cause changes in the earth’s surface. Vibrations often set landslides in mountainous regions.A greater danger in an earthquake is the falling of buildings. Most of the houses which collapsed were made of mud and bricks and proved to be death traps. Fire is another great danger. Underground water system is naturally disturbed by such movements.

There are three types of earthquake waves:

An earthquake which originates below or near the sea causes great disturbance in the water. The floods and waves cause great loss of life, sometimes more than the earthquake itself. Tsunami, a Japanese term, is the name given to the huge wave caused in the sea by an earthquake. Tsunamis are quite common along the coasts of Japan and other regions in the Pacific Ocean.

The world’s distribution of earthquakes coincide very closely with that of volcanoes. Regions of greatest seismicity are circum-Pacific areas, with the epicenters and the most frequent occurrences along the Pacific Ring of Fire. It is said that about 68 percent of earthquakes occur in this belt. Another 31 % of earthquakes take place in the Mediterranean-Himalayan belt including Asia Minor, the Himalayas and parts of north-west China. The remaining percent of earthquakes are occur in Northen Africa and Rift valley areas of the Red sea and Dead sea.

In India, the Himalayan region and the Ganga-Brahamaputra valley are prone to earthquakes. A number of earthquakes have been experienced in this region. Some of them were very severe and caused extensive damage, e.g., the earthquake of Uttar Kashi in 1991 and Chamoli in 1999. 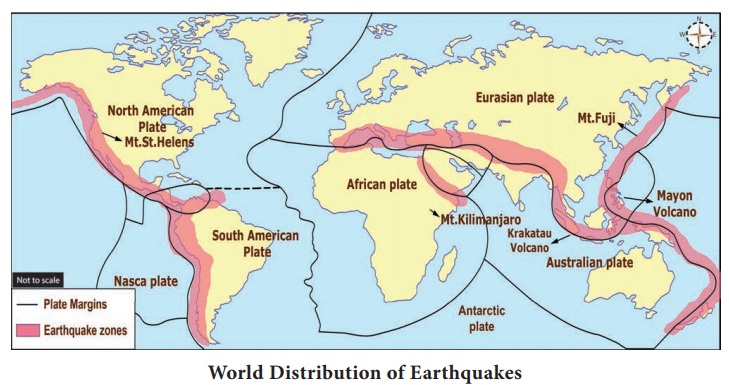