A volcano is a vent or an opening in the earth’s crust through which hot magma erupts from deep below the surface. The opening is usually circular in form.

A volcano is a vent or an opening in the earth’s crust through which hot magma erupts from deep below the surface. The opening is usually circular in form.

Volcanic eruptions may also take place through a long crack or fissure through which steam and other materials flow out. 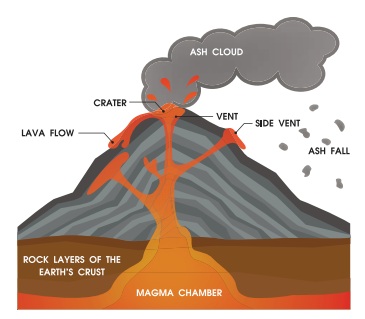 The molten rock material within the earth, together with gases, is called magma. After it rises to the surface, it is called as lava. In course of time, lava and other materials flow out of a volcano accumulate around the opening and form a conical hill or a mountain vent is an openning or mouth of a volcano. The top of this cone is usually marked by a funnel-shaped depression, which is called a crater. If the crater of a volcano is of great size and is shaped like a basin, it is called a caldera. Calderas are caused by violent explosions which blow away entire tops of great cones.

The temperature increases as the depth increases at the rate of 1ºc for every 35 metres. There is also great pressure. At a depth of about 15 km the pressure is about 5 tonnes per cm2of rock. Under these circumstances, the interior of the earth is in a semi-molten state called magma. The magma, under great pressure has the capacity to dissolve great volume of gas; some gases are also combustible. This makes volcanic material burst forth through the weak spots in the earth’s crust.

Sometimes, magma rises slowly to the surface and spreads over a vast area. This is known as fissure eruption. Some plateaus and plains have been formed in this way, e.g., Deccan Plateau in India and the Colombian Plateau in North America. If the magma rises quickly to the surface, lava is thrown high into the atmosphere. Besides lava, ash, steam, gases and pieces of rocks are also thrown out. This type of eruption is known as explosive eruption. The terrible explosion on the island of Krakatoa (27th August 1883) in Indonesia is an example for explosive type of eruption.

Barren island is situated in the Andaman Sea, and lies about 138 km northeast of the territory's capital. It is only in active volcano along the chain from sumatra to myanmar. Last eruption occurred in 2017.

The shape of a volcano depends on the type of lava and the force of the eruption. On the basis of shape, there are three types of volcanoes. They are:

1. Shield volcano: A shield volcano is formed by quiet eruption of lava with a low silica content. Such a volcano has a wide base and a cone with gentle slopes. Volcanoes of the Hawaii islands are of this type.

2. Cinder-cone volcano: Silica-rich magma traps gases inside the volcano until enough pressure is built to push the magma out of the earth’s crust. When this type of volcano erupts, it shoots gases, ash, etc. with great force throwing them several kilometres up into the atmosphere. Such volcanoes have steep slopes and are made of cinder and ash. They are known as cinder-cone volcanoes. Many volcanoes of Mexico and Central America belong to this group.

Volcanoes are also grouped according to their periodicity of eruptions such as active, dormant and extinct. These names refer to the state of activity rather than the types of volcanoes.

Stramboli is known as the ‘light house of Mediterranean sea’

Dormant volcanoes have shown no sign of activity for many years but they may become active at any time. It is also called Sleeping Volcano Vesuvius mountain of Italy, Mt Fujiyama in Japan, Mt. Krakatoa of Indonesia are famous examples of this types.

Distribution of Volcanoes in the world

Volcanoes are located in a clearly-defined pattern around the world. They are closely related to regions that have been intensely folded or faulted. There are about 500 active volcanoes and thousands of dormant and extinct ones. They occur along the coastal mountain ranges, as off-shore islands and in the midst of oceans, but there are a few in the interior of continents. The volcanic belts are also the principal earthquake belts of the world. There are three major zones of volcanic activities in the world. They are:

This is the volcanic zone of the convergent oceanic plate boundary. It includes the volcanoes of the eastern and western coastal areas of Pacific Ocean. This zone is popularly termed as the Pacific Ring of Fire which has been estimated to include two-thirds of the world’s volcanoes.

This is the volcanic zone of convergent continental plate boundaries that includes the volcanoes of Alpine mountain chains, the Mediterranean Sea and the fault zoof eastern Africa. 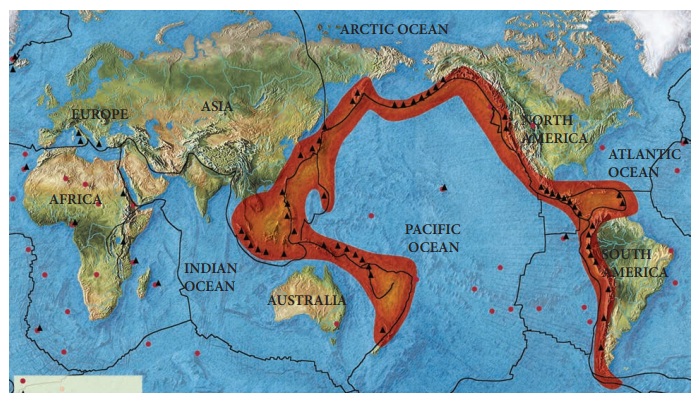 The important volcanoes are Vesuvius, Stromboli, Etna,Kilimanjaro and Kenya. Surprisingly, the Himalayas have no active volcanoes at all.