Interference with the Natural World

INTERFERENCE WITH THE NATURAL WORLD

To some people, particularly in Europe, the creation of transgenic animals and plants is seen as hazardous meddling with nature. Of course, humans have been tinkering with nature by improving livestock and crop plants for thousands of years. However, it is now possible to move blocks of genetic information across major taxonomic boundaries (e.g., from bacteria to animals or plants), rather than merely selecting for reassortment of genetic variation within a population or hybridizing closely related species.

Transgenic animals and plants, together with their uses, have been described. Most transgenic animals, especially those designed for production of large amounts of clinically or industrially useful proteins, are unlikely to compete well in the wild. Furthermore, transgenic animals can be contained fairly efficiently. On the other hand, plants with improved resistance to drought, disease, or insect pests may well have an advantage in the wild and might spread naturally. In addition, plants are much more likely to hybridize with related natural species, possibly transferring the transgenes into wild populations. Movement of transgenes into wild relatives has already been observed with transgenic corn in Mexico. Thus we already have cases of genetically engineered organisms that have escaped into the wild. How this will alter the balance of nature is unknown.

There has been considerable controversy over the use of transgenic plants in agriculture. Although the term genetically modified organism (GMO) is often used, we should remember that all domesticated plants and animals have been genetically modified by more traditional methods and consequently differ greatly from their wild ancestors. There are three main issues to consider for transgenic crops. First is whether the food product is safe for human consumption. Second is the question of containment. Third is the question of hazard to the environment.

Containment of transgenic plants is unrealistic on an agricultural scale. In practice, seeds from different batches of corn are impossible to keep wholly separate, and mixing of GMO with natural corn has occurred (e.g., the Starlink case in 2000). DNA of transgenic origin has been detected in wild plants. For example, wild maize (corn) in Mexico examined in 2001 contained transgenic DNA, even though planting transgenic corn plants was stopped in 1998. Worrisome possibilities include genes for herbicide resistance moving from crop plants to weeds. This would make weed control more difficult. Similarly, insecticide toxins expressed in pollen grains might harm bees, impairing the pollination of crops that depend on the bees. Events like these could decrease agricultural productivity.

Perspectives on GMO food vary greatly ( Table 25.1 ) but seem rather predictable, based on known vested interests. Those who grow, export, and profit from GMO crops claim that they are safe and that the controversy is largely an emotional overreaction. Originally, the corporations and farmers were overall pro-GMO. However, the terminator controversy caused a rift between these two groups . Environmental and consumer groups tend to oppose GMO, as with any new technology.

If you believe that interference with Nature is wrong, dangerous, or even blasphemous (“playing God”), where do

you draw the line?

Should development of transgenic crops capable of flourishing under poor conditions, without need for

expensive fertilizers, insecticides, weed-killers, and so forth, be developed because this would especially benefit

Because advanced nations such as the United States have a food surplus using traditional methods, why not

Genetic engineering followed by cloning to distribute many identical animals or plants is sometimes seen as a threat to the diversity of nature. However, humans have been replacing diverse natural habitats with artificial monoculture for millennia. Most natural habitats in the advanced nations have already been replaced with some form of artificial environment based on mass production or repetition. The real threat to biodiversity is surely the need to convert ever more of our planet into production zones to feed the ever-increasing human population. The cloning and transgenic alteration of domestic animals makes little difference to the overall situation.

Conversely, the renewed interest in genetics has led to a growing awareness that there are many wild plants and animals with interesting or useful genetic properties that could be used for a variety of as-yet-unknown purposes. This has led in turn to a realization that we should avoid destroying natural ecosystems because they may harbor tomorrow’s drugs against cancer, malaria, or obesity.

The morality of animal testing applies to traditional products and medications as much as to new genetically engineered ones. It should be noted that vastly more animals are used for product testing and quality control than for actual research. On the one hand, each novel product or procedure means more animal testing. On the other hand, advances in molecular biology mean that many tests can now be performed on cells in culture, avoiding the use of living animals. For example, potential carcinogens can be screened initially by the Ames test, which uses bacteria to detect mutagenic agents. Furthermore, advances in genomics and proteomics now allow vast amounts of data to be garnered from testing the responses of multiple genes in cultured cells rather than from measuring the response of a single enzyme in whole organisms.

A generation ago, social activists demanded that medicines, cosmetics, shampoos, foodstuffs, and every other product that might come into contact with a human being should be rigorously tested for safety using animals. This led to massive government legislation mandating such testing. Today’s animal rights activists are demanding less animal testing. There are even suggestions that such products as soap and shampoo, with familiar ingredients and properties, do not really need to be constantly tested by rubbing them into the eyes of animals to demonstrate that they will cause discomfort. This is a good example of how moral fashions vary, and even reverse, over time.

Humans have meddled with nature since time immemorial. Historically humans have altered animals and plants by deliberate selective breeding and hybridization. In addition, human activity has led to unconscious genetic modification of many organisms. For example, we have undoubtedly selected alterations in the mice that infest our fields and grain storage facilities and the insects that rely on human crops. The novelty of genetic engineering is not in what we are doing, but in how we do it. Today we generate transgenic organisms by direct manipulation of their genetic material.

Even if you devote a whole field to growing a crop plant that is natural, you are eliminating the natural inhabitants of that patch of land. Moreover, you will select for life forms—both weeds and insect pests—that adapt to croplands. The European corn borer is a huge threat to the corn crop, but if we did not grow so much corn, these insects would be rare. Whether we want to or not, whether we are aware of it or not, we are imposing genetic selection on many other organisms, whatever we do.

Genetic manipulations could create future organisms that are truly bizarre by today’s standards. By manipulating the homeobox genes, which control body plans and segmentation, maybe a “chickapede”—a chicken with multiple legs and body segments— could be created. Perhaps more grotesque would be to develop feed animals lacking most of the brain. This would avoid the suffering of domestic animals that are kept for slaughter. The controversy surrounding such future creations is yet to arise.

Is interference with nature worse when dealing with animals versus plants? What about “pets” versus

Should people be allowed to clone their pets?

Is genetic engineering OK as long as no foreign DNA is introduced from another species?

Would it be OK to develop a chicken with, say, 10 legs for food?

Transgenic Animals for Art and Amusement

A rather frivolous use of biotechnology is the creation of transgenic animals for artistic reasons—“ transgenic art .” The insertion of the marker genegfp , which encodes green fluorescent protein (GFP), is now routine in genetic engineering. Other fluorescent proteins  with other colors are also increasingly used. Consequently, green fluorescent animals are now quite common. Such animals appear normal in daylight, but if illuminated in the dark with near-UV or blue light, the whole animal fluoresces green. It is necessary to use animals with white fur or naked skins to visualize the color clearly. Thus albino strains of mice and rabbits show this effect well, whereas in animals with dark fur the green fluorescence is obscured. Alba the green fluorescent rabbit—“GFP Bunny”—has been claimed as genuine transgenic art. Alba was born in France in the spring of 2000.

Alba is a transgenic albino rabbit expressing high levels of GFP. She is surrounded by controversy. The artist, Eduardo Kac, claims that Alba was engineered at his request, whereas the scientists claim that she was made for research purposes and have not released the rabbit to the artist! But what if red and green fluorescent mice are marketed as children’s pets or even as Christmas décor? What about creating red, white (i.e., nontransgenic), and blue fluorescent mice for patriotic purposes? Will NASA send a trio of red, white, and blue rhesus monkeys into space? Genetic art based on bacteria has also been displayed recently ( Fig. 25.5 ). 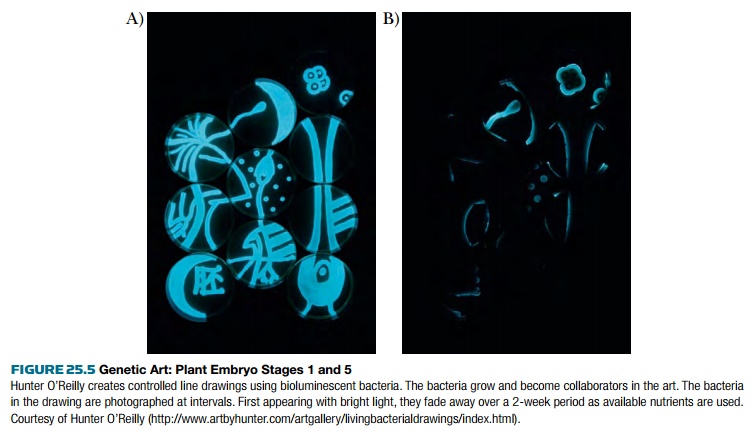 Humans have bred animals for art and entertainment for a long time. Many breeds of dogs fall in this category, and a variety of other animals are also bred for show rather than for food or work. Transgenic technology has merely speeded up this process and allowed more drastic alterations than the traditional crossbreeding methods.

Should transgenics be restricted to “serious” areas such as health care and agriculture?