Genetic Screening in Pregnancy and Abortion

Genetic screening of newborn babies has been practiced for some time. Such information is used to allow early treatment of newborn infants, the classic case being phenylketonuria (PKU). People with PKU lack the enzyme that converts phenylalanine to tyrosine, and excessive amounts of phenylalanine causes permanent brain damage. Newborn screening allows infants with PKU to be given a diet low in phenylalanine, greatly reducing the damage. More recently it has become possible to screen developing fetuses for a variety of genetic defects long before birth. Analytical techniques are constantly advancing and an ever-increasing list of inherited defects can be monitored, at ever earlier stages of development.

However, prenatal genetic screening could also be used to decide whether to abort a fetus destined to suffer from an inherited defect. As understanding of the human genome increases, it will become possible to deduce such things as the probable future height, eye color, IQ, and beauty of the developing fetus. Most parents would like to have smart, healthy, and attractive children, and the temptation to have abortions based on these characteristics will soon become a reality.

The abortion issue is of course a peculiarly American obsession. Most European nations legalized abortion in the 1950s, and few Europeans take seriously the moralistic pronouncements on this issue that come from the other side of the Atlantic. The central question of the abortion issue is “When does human life start?” From a biological perspective, life does not start at one particular point but is a continuum. Sperm cells are alive, and so are the eggs they fertilize. Fusion of egg and sperm to create a zygote forms a new livingindividual with a unique genetic constitution. Rather than the beginning of life, the issue is perhaps really about consciousness. When do we actually become a conscious being? This is impossible to answer because no one yet understands consciousness, let alone has the ability to measure it.

Because society has arbitrarily decided that abortion is legal until the end of the first trimester, who should decide if an abortion is to be performed? From a genetic viewpoint, both father and mother have an equal share in the new individual—except for the mitochondrial DNA that is maternal in origin. From the viewpoint of biological resources, the mother has more invested and has traditionally been allowed to make the decision. Thus, the father often has fewer rights over the children. Although this outlook was not deliberately based on evolutionary considerations, it does in fact coincide with Darwinian logic.

Another issue that has become entangled with the abortion controversy is stem cell research. Stem cells are the precursors to the differentiated cells that make up the body. Different types of stem cells correspond to different types of tissues. Embryonic stem cells are found in the developing embryo and retain the ability to develop into any body tissue. Embryonic stem cells can be maintained in culture and may be used to create transgenic animals by insertion of DNA.

It is hoped that engineered stem cells will eventually be used to regenerate damaged tissues or organs. One controversy concerns the source of the embryonic stem cells. In particular, should they be taken from discarded fetuses? One side claims that stem cell research will encourage abortions just to provide material. The other side claims that stopping research will deny patients medical improvements such as organ replacements. A related issue is the use of stem cells from leftover embryos in fertility clinics. Because few stem cells are needed for research, and vast numbers of aborted fetuses already exist, increased numbers of abortions seems unlikely. In addition, no one has yet grown an actual human organ from a stem cell. Thus this controversy is based on possibilities, not realities. One suspects that if technology advances far enough to grow organs in culture, it will also allow the use of stem cells from the patient’s own body and embryonic tissue will no longer be required. Stem cell research merges into other areas of biotechnology. If scientists are not allowed to use existing aborted tissue, can they create their own embryos in vitro ? How far should such embryos be allowed to develop? Should brain tissue be used, since that is where people believe our consciousness lies?

Human cloning is another contentious issue. We have discussed the technology behind  cloning animals and have already noted some ethical issues in animal cloning (discussed earlier). Not surprisingly, human cloning is generally seen as more unethical than animal cloning. Two uses have been proposed for human cloning. One is the generation of new individuals, identical to the donor of the genetic information. The other is the use of cloning to produce new parts for organ and tissue replacement.

The technical problems in cloning have been discussed . Assuming that these are solved and cloning becomes safe and reliable, is there any reason to prohibit human cloning? It has been suggested that parents could replace a child who died prematurely or that dictators could keep a series of backup clones for emergencies. However, cloned humans would have to be carried by a surrogate mother. After proceeding through normal development, they would only reach adulthood after many years. Thus the idea of “replacing” individuals with cloned replicas faces the problem of a massive time lag. Furthermore, environmental and developmental influences would mean that although genetically identical, the clone wouldnot be a true “behavioral replica.” Remember that although identical twins are geneticallyidentical—“natural clones”—they still show considerable divergence in personality, behavior, and ability.

Cloning incomplete humans for spare parts seems less upsetting to most people today, though technologically it might actually be more difficult because modifications would be needed to avoid developing complete individuals. In particular it would be necessary to engineer a humanoid with no conscious mind, presumably by greatly reducing development of the brain. Will we end up in a world where everyone has a brainless backup clone in the basement to provide spare parts? Or will a central facility grow generic clones with elongated bodies, missing heads, and 20 kidneys? At a more mundane level, the presumed use of stem cells for organ regeneration has probably made cloning for replacement parts an obsolete approach.

If such creatures are engineered, will a further step be to use cloned humanoids lacking higher consciousness as food? Such cannibalism would avoid harming animals and would provide food with exactly the right composition. Although this may sound bizarre, remember that it has been suggested that the Aztecs practiced cannibalism for nutritional (rather than cultural) reasons and on a scale large enough to have contributed significantly to the diet, at least of the upper classes. This of course is controversial, because accurate numbers for both the total populations and numbers of victims are lacking. In a fascinating new twist, it has been shown that diets based almost solely on corn (maize) cause serotonin deficiency in the brains of rats. Moreover, low serotonin levels have been correlated with bizarre and violent behavior in both experimental animals and humans. This has led to the suggestion that it was their high-maize diet that promoted cannibalism among the Aztecs. Thus, it is conceivable that morality can be affected by diet!

Men are Generally More Careful of the Breed of their Horses and Dogs than of their Children.

The ultimate in playing God is not merely to clone humans but to improve them genetically also. This is Frankenstein’s monster in its 21st-century guise. In works of fiction, engineered humans always display some unforeseen and fatal flaw (an exaggerated fear of fire in the case of Frankenstein’s monster). The implication is that we do not know enough to tinker safely and should therefore refrain from meddling with nature. Another common theme, at least in grade B movies, is the emergence of a group of superior humans, often with psychic powers, higher IQs,  and stronger bodies. Sometimes this is due to accidental exposure to radiation, sometimes the result of mysterious “upward evolution,” and sometimes caused by deliberate selective breedingor genetic engineering. The hero typically eradicates these cliques of super-people, presumablydemonstrating that it is morally preferable to be weaker and less intelligent. Occasional half-baked attempts have been made at eugenics—the deliberate genetic improvement of the human species. For example, between the two world wars, the American eugenics movement promoted the sterilization of the mentally subnormal and violent criminals. Such schemes were based on selective breeding (as used on domestic animals over the centuries) rather than genetic engineering. In practice, institutionalization of criminals and mental patients greatly reduces the number of offspring, so the overall results of sterilization programs were probably marginal.

Those opposed to modern genetic engineering often mention these old eugenics programs. Although rarely included in such discussions, providing welfare to those unable to feed their own children also has an effect on the future genetic constitution of the species. Welfare may increase the number of dependent people who do not contribute to society as a whole. For that matter, almost any major social or political change affects the human gene pool. Any major epidemic favors those individuals with greater resistance to disease and hence carries out genetic selection on the human population under attack. Mutations providing resistance to a variety of virulent infections (e.g., smallpox, malaria, dysentery/cholera) are now being discovered in the human genome.

Mutation and selection have also resulted from cultural changes. For example, the domestication of cattle has resulted in the genetic modification of those humans who chose this way of life. Lactase is the enzyme that breaks down the sugar lactose present in milk. Ancestral humans expressed the gene for lactase only during infancy. Modern cultures thatdrink large amounts of milk in adulthood show lactase expression in adults. This is due to a T-to-C base change in a regulatory sequence about 14 kb upstream of the structural gene encoding lactase. Thus dairy farming has led to the selection of lactase expression in adults. Those able to efficiently use the new food supply had a selective advantage. Such genetic changes were the unwitting side effects of cultural choices. Whether we are aware of the changes or not, humans are constantly modifying themselves genetically.

Returning to Man’s Best Friend, Fig. 25.6 demonstrates the remarkable changes that have been brought about by selective breeding without the help of genetic engineering. 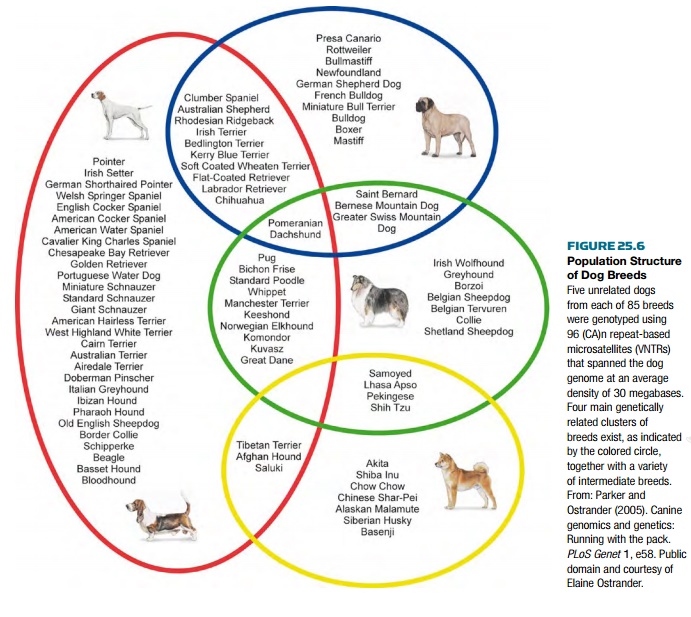 Future technology may allow humans to be engineered by choosing variants of existingmhuman genes (e.g., resistance to disease, improved intelligence, blue eyes). This can already be done in a primitive way by genetic screening followed by abortion of an undesired fetus, as noted earlier. However, transgenic technology may eventually allow deliberate engineering of offspring for desired characters.

Such technology would also allow the insertion of foreign DNA into the human genome, creating transgenic humans. Most parents hope their children will do well, and one can easily imagine parents wanting “new and improved” children, if available. We have discussed engineering animals to make their own essential amino acids, thus avoiding the need to provide these in the diet (see Chapter 15 ). What about combating malnutrition and vitamin deficiency in humans by inserting DNA encoding metabolic pathways for essential amino acids or vitamin C? One can also imagine fringe elements wanting children with novel or cosmetic genetic enhancements derived from nonhuman life forms. Will we eventually see green fluorescent children to add to the string of GFP animals mentioned earlier?