Another general point is the effect of ignorance and novelty on supposed morality. People are frightened of the unfamiliar, and these fears are often expressed in moralistic terms.

Another general point is the effect of ignorance and novelty on supposed morality. People are frightened of the unfamiliar, and these fears are often expressed in moralistic terms. Whenever some new advance occurs in science and technology it is almost certain to be greeted with claims that it is either immoral or hazardous to society or both. For example, when the steam locomotive appeared, the flames in the firebox were compared to the fires of Hell by overly enthusiastic preachers. This aspect of morality has nothing to do with science in particular and is also seen in other areas. For example, novel fashions in clothing, music, or entertainment are frequently condemned as evidence of moral decline.

Advances in science are subject to fear stemming from novelty and compounded by the effects of fear stemming from ignorance. Genetic engineering and human cloning are very complex issues, and relatively few members of the general public understand the science behind them. Because these topics are understood by so few of the general public, misinformation, bothdeliberate and accidental, becomes a real issue in the debate. The entertainment industry often portrays genetically engineered or cloned organisms as evil and scary.

The other side of this phenomenon is that once a new fashion or technique has become familiar, complaints against its supposed immorality fade away. When rock music emerged, it was widely condemned as immoral by preachers. Today, many churches feed their congregations rock music to keep in touch with youth. Many rock bands use their lyrics to help spread the word of God. Saving lives by giving smallpox vaccinations was once regarded as “playing God,” and hence blasphemous. Yet today every preacher and his or her kids are vaccinated against a dozen diseases. Today human cloning is often criticized as “playing God.” Will tomorrow see the College of Cardinals advocating the cloning of Mother Teresa? When the first animal, Dolly the sheep, was cloned, it hit the headlines and gave rise to a heated moralistic debate. Today there is a big furor about human cloning and stem cells.

Meanwhile, animal cloning has largely been accepted and the cloning of yet another species scarcely qualifies as front-page news anymore. When “test tube babies” ( in vitro fertilization) first appeared, they were the subjects of intense ethical debate by self-appointed leaders in human morality. Louise Brown, the world’s first test tube baby, was born on July 25, 1978, in England. Since then there have been more than a million others, and today the procedure is covered by most health insurance plans. In December of 2006, Louise Brown gave birth to a naturally conceived son, Cameron John, illustrating that test tube babies reproduce normally as adults. The “morality” of this topic is rarely even discussed any more. Indeed, it is now possible to buy test tube baby necklaces ( Fig. 25.2 ). The fact that most “fundamental ethical issues” fade away at much the same rate as fashions in women’s clothing brings their deep significance into question. 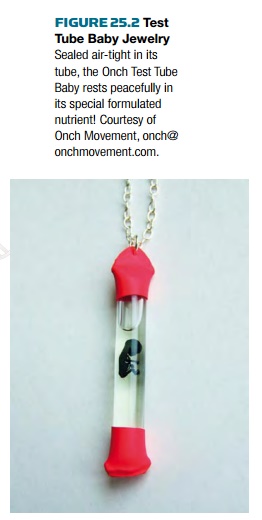 Another factor that makes most ethical decisions highly subjective is cultural viewpoint. It is rather noticeable that Americans tend to oppose genetic engineering on religious grounds. Europeans are much more likely to question the possible dangers to human health or the environment. Thus the furor about the dangers of genetically modified crop plants and food arose first in Western Europe. In contrast, the ethics of using human stem cells has been muddled into the American religious controversy surrounding abortion. Consider that abortion was legalized in most Western European nations in the 1950s, but in America not until the 1970s. Was it moral to have an abortion in England in 1960 but immoral to have one in the United States the same year? (Note that rich American women would cross the Atlantic to get abortions in Europe during this period, thus buying themselves out of their own society’s legal situation.) Does this suggest that much morality is merely local custom? If so, whose brand of ethics should be used?

Alternatively, one might argue that abortion is (or is not) immoral and that local legal differences do not reflect ethics.