A variety of specific ethical issues may be loosely grouped under the heading of health care. These issues largely affect the present generation as opposed to altering their descendents genetically. Few of these issues are truly new from a moral perspective. Once the novelty has worn off, the attached moral issues will fade as the technology becomes accepted. Besides novelty, safety and expense are issues that must be addressed when focusing on health care.

Objectively, the likelihood of surviving a biological attack is much better than surviving a nuclear strike. Despite this, those who are unfamiliar with microbiology tend to find biological warfare very frightening and often regard it as more immoral than chemical or nuclear warfare. This disproportionate response to germ warfare can be seen in the hysterical response of the United States to the anthrax attacks of 2001–2002 that followed the terrorist destruction of the World Trade Center. The actual number of casualties was low, yet the associated fear was widespread and became a hot media topic. Perhaps one major reason for the fear is lack of visibility. Guns and bombs are highly visible. Infectious microbial agents are invisible to the naked eye. The fear of invisible dangers can become quite obsessive.

Whether or not research on germ warfare should be done is hotly debated. Knowing how to protect against an infectious disease inevitably provides information that would help in using the disease against an enemy. This conundrum is true in other areas. For example, the technology to build a nuclear power station is closely related to that needed to develop nuclear weapons. The same body of knowledge can often be applied to both positive and negative objectives.

Another issue is that of the Third World versus the industrial nations. Germ warfare has been described as the “poor man’s nuclear weapon.” Nations too poor to develop costly high-tech weapons could throw together crude biological weapons relatively easily and cheaply. Germ warfare thus represents a possible means by which Third World nations could protect themselves against the rich nations. This aspect is compounded by the fact that soldiers from rich countries have higher life expectancies and a better quality of living than do the poor inhabitants of the Third World. Thus a poor dictatorship might be tempted to release a biological agent within its own borders and accept casualties to its own people, knowing that this would frighten off a rich invader. There is some historical precedent for this. In World War I typhus epidemics were common on the Eastern front. The Serbians lost 150,000 men to typhus in the first 6 months of the war, including more than half of their 60,000 Austrian prisoners of war. Paradoxically, this actually aided the Serbs, because the Austrians were so frightened by the typhus epidemic that they kept their armies out of Serbia for fear of infection. Third World nations are also much more accustomed to death and illness due to extreme poverty. Perhaps this is one reason why the rich nations are so eager to ban germ warfare while keeping more expensive weapons of mass destruction in circulation.

Does the method of killing large numbers of people affect the morality of doing so?

Is research intended to develop germ warfare agents more or less immoral than research into nuclear or chemical weapons?

Should preventative research be regarded with suspicion because the same, or closely related, technology can

be used both for attack and defense?

are allowed? Is it wrong for poor countries to possess biological weapons but OK for “responsible” advanced

nations to do so?

The technology of gene therapy has been discussed. Here we are excluding heritable changes to the human germline (i.e., transgenic humans) and considering only somatic gene therapy. The issues involved are mostly the same as for any other noveltechnology—safety and cost. In practice, gene therapy is still mostly in the experimental stages, and most questions have to do with the safety of the procedures and avoiding possible harm to the patients. Several individual incidents have occurred over the past few years in which patients receiving experimental gene therapy died or suffered serious injury. On the other hand, most of these patients have incurable conditions and hence little expectation of living long, healthy lives.

If you know you are going to die within a year or two, why not risk a novel treatment that might kill you or might

give you a dozen years of healthy life?

Do excessive safety regulations passed in response to one or two unfortunate cases slow down overall the development of treatments that might otherwise save many lives?

To what extent should the taxpayer bear the burden of expensive novel technology for those who cannot afford it?

The current system of organ transplants relies on people donating their organs after death. Too few people volunteer, resulting in a shortage. To alleviate this, it has been proposed to develop human clones as a source of replacement organs (as opposed to the creation of new individual persons). Artificial tissues (i.e., of nonbiological origin) are also being developed, and eventually wholly artificial organs may become available. One can also imagine replacement organs that are mixtures of artificial and biological parts. Yet another alternative is nanotechnology, the use of engineering on a microscopic scale.

This may eventually provide tiny devices that can replace biological components, although using different mechanisms, such as miniature filtration units to replace defective kidneys, or photosensors for defective vision ( Fig. 25.4 ). However, all these options are somewhat futuristic, and at present, stem cells seem the most likely basis for organ regeneration (see later discussion). 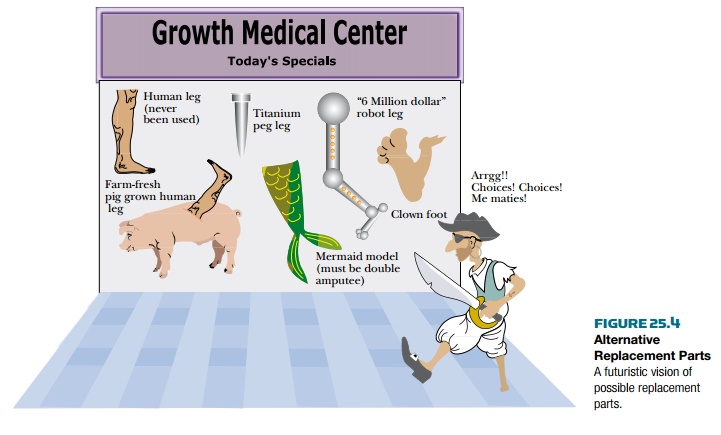 Creating and transplanting new body parts is very complex, and thus expensive. This raises the old issue of access to medical care by the poor. A related issue is how to distribute a limited supply of spare organs among those who need replacements. Currently, organs are distributed on a first-come-first-served basis combined with urgency. Even here, the classic question still exists: “If only one liver is available, should it be given to the alcoholic (who will abuse it), the aging textbook writer (whose best work is over), or a young child (future unknown)?” Until there is an unlimited supply of organs, this debate will continue and make for good storylines for books and movies.

From the 1980s onward, several European countries have introduced presumed consent laws for organ donation. Under this system, it is presumed that an individual is willing to contribute organs upon death, unless he or she has registered as a nondonor or there is other evidence to the contrary (e.g., from relatives). In most cases this has greatly increased the supply of organs.

Or does the prospect of the “Bionic Man” raise other moral questions?

When a technological resource is scarce, how should the few lucky recipients be chosen from those who need

Should the United States switch to presumed consent for organ donation?

When bacteria are exposed to antibiotics, they may gain resistance. This may be due to mutation or to gaining mobile genetic elements such as plasmids, bacteriophage, and transposons, which already carry antibiotic resistance genes. Overuse and improper use of antibiotics have led to the spread of antibiotic resistance. It is consequently getting difficult to find effective antibiotics to treat certain infections that used to be susceptible. It is estimated that about two people die per hour (or 17,000 per year) in American hospitals as a result of infection with drug-resistant bacteria. Many practices lead to the spread of antibiotic-resistant bacteria—greed, ignorance, and poverty are all involved. Certain antibiotics are widely used in agriculture to promote growth of domestic animals and improve meat yields. The United States leads the world in antibiotic consumption,using 23 to 25 million pounds in 2001. Only 10% of this was used to treat humans, and the other 90% was used on animals. Not surprisingly, bacteria resistant to such antibiotics are now widespread. Unlike the United States, this practice has been greatly restricted in Europe, where only 40% of the antibiotics are now given to animals. There has been a major drop in antibiotic-resistant bacteria in Europe, especially in Denmark, which has instituted a total ban on antibiotics in animal feed. Furthermore, the prices of pork and poultry have not risen because of lowered animal yields.

Similar considerations apply to antiviral agents, such as those used to treat AIDS. In this case the virus mutates so fast that treatment with just one antiviral agent will almost certainly result in resistant HIV mutants appearing in most patients. In practice AIDS patients are given cocktails of at least three antiviral agents so that the other antiviral agents will kill mutants resistant to one. However, patients who cannot afford expensive cocktails may be treated with a single agent. This allows development of resistant virus to one antiviral agent at a time. If such HIV strains are transmitted from one person to another, they may gradually pick up multiple resistance. Discontinuation of AIDS medication when patients begin to feel healthy again is also a serious problem, especially among the poor and uneducated. This is exacerbated by the high cost of AIDS therapy and the inconvenience of taking multiple different pills at different times of the day.