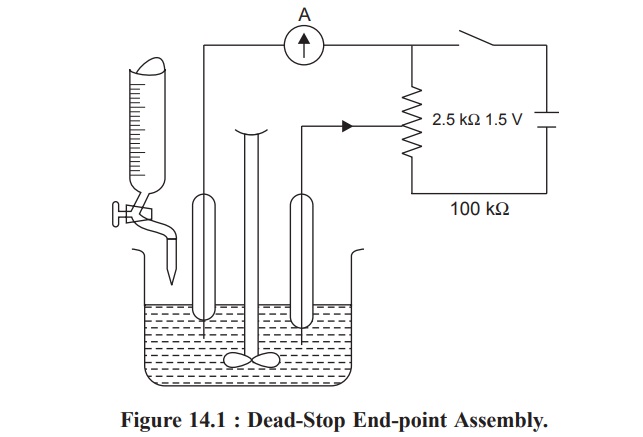 Figure 14.1 illustrates a simple dead-stop end-point assembly or a Karl Fischer titration apparatus. The titration vessel is fitted with a pair of identical platinum electrodes, a mechanical stirrer with adjustable speed, and a burette. It will be observed that absolutely little or no current may flow unless and until the solution is totally free from any polarizing substances ; this could perhaps be due to the absorbed layers of oxygen and hydrogen on the anode and cathode respectively. However, the current shall flow only when the two electrodes get depolarized. The Karl Fischer reagent is pumped into the burette by means of hand bellows, the eccess of moisture is usually prevented by employing an appropriate arrangement of desiccant tubes. Alternatively, the stirring may also be accomplished either by using a magnetic stirrer or by means of a suitably dried nitrogen passed gently through the solution during the course of titration.

The end-point is achieved by employing an eiectrical circuit comprising of a microammeter (A), platinum electrodes, together with a 1.5 V to 2.0 V battery connected across a variable resistance of about 2.5 kΩ. First of all the resistance is adjusted in such a manner that an initial current passes through the platinum electrodes in series with a microammeter (A). After each addition of reagent, the pointer of the microammeter gets deflected but quickly returns to its original position. At the end of the reaction a deflection is obtained which persists for 10-15 seconds.

Commercially available Modern KF-Titrators are usually equipped with specifically designed titration vessels that are exclusively meant to check and prevent the contact with atmospheric moisture. Quite a few such devices are armed with microprocessors that will perform the requisite operations sequentially in a programmed manner automatically ; and may also dish out a print-out of the desired results including the percentage moisture content. In fact, these Modern KF-Titrators not only afford greater accuracy and precision in results but also offer much ease and convenience in routine analysis as compared to the classical techniques based on either caulometry or controlled current potentiometry using two indicator electrodes.

In this procedure the iodide needed for the reaction with water is normally generated within the titration vessel caulometrically as shown below :

Thus, the basis of the analysis rests upon the quantitative relationship existing between charge passed and iodine produced by the reagent according to the above reaction. Therefore, the generation of iodine is automatically stopped when an excess of it is detected by the indicator electrode. It essentially consists of two platinum electrodes across which an AC is applied and subsequently a marked drop in voltage between the electrodes takes place as soon as an excess of iodine is present. Normally such automated instruments make use of proprietory reagents exclusively.

The major advantage of this approach to KF-analysis being that no calibration is required as the method is absolute and is entirely based on the stoichiometry of the aforesaid equation. It is noteworthy that one may determine the amounts of water ranging between 10 mcg and 10 mg in solid as well as liquid samples.