Chapter: Essentials of Anatomy and Physiology: An Introduction to Microbiology and Human Disease

An infectious disease is one that is caused by microor-ganisms or by the products (toxins) of microorganisms.

An infectious disease is one that is caused by microor-ganisms or by the products (toxins) of microorganisms. To cause an infection, a microorganism must enter and establish itself in a host and begin reproducing.

Several factors determine whether a person will develop an infection when exposed to a pathogen. These include the virulence of the pathogen and the resistance of the host. Virulence is the ability of the pathogen to cause disease. Host resistance is the total of the body’s defenses against pathogens. Our defenses include aspects of innate immunity such as intact skin and mucous membranes, and the sweeping of cilia to clear the respiratory tract, as well as adequate nutri-tion, and the adaptive immune responses of our lym-phocytes and macrophages.

To illustrate these concepts, let us compare the measles virus and rhinoviruses (common cold). The measles virus has at least a 90% infectivity rate, mean-ing that for every 100 non-immune people exposed, at least 90 will develop clinical measles. Thus, the measles virus is considered highly virulent, even for healthy people. However, people who have recov-ered from measles or who have received the measles vaccine have developed an active immunity that increases their resistance to measles. Even if exposed many times, such people probably will not develop clinical measles.

In contrast, the rhinoviruses that cause the com-mon cold are not considered virulent pathogens, and healthy people may have them in their upper respira-tory tracts without developing illness. However, fatigue, malnutrition, and other physiological stresses may lower a person’s resistance and increase the like-lihood of developing a cold upon exposure to these viruses.

Once infected, a person may have a clinical (apparent or symptomatic) infection, in which symp-toms appear. Symptoms are observable or measurable changes that indicate illness. For some diseases, sub-clinical (inapparent or asymptomatic) infections arepossible, in which the person shows no symptoms. Women with the sexually transmitted disease gonor-rhea, for example, may have subclinical infections, that is, no symptoms at all. It is important to remember that such people are still reservoirs (sources) of the pathogen for others, who may then develop clinical infections.

COURSE OF AN INFECTIOUS DISEASE

When a pathogen establishes itself in a host, there is a period of time before symptoms appear. This is called the incubation period. Most infectious diseases have rather specific incubation periods (Table 22–2). Some diseases, however, have more variable incubation peri-ods (see hepatitis in Table 22–2), which may make it difficult to predict the onset of illness after exposure or to trace outbreaks of a disease. 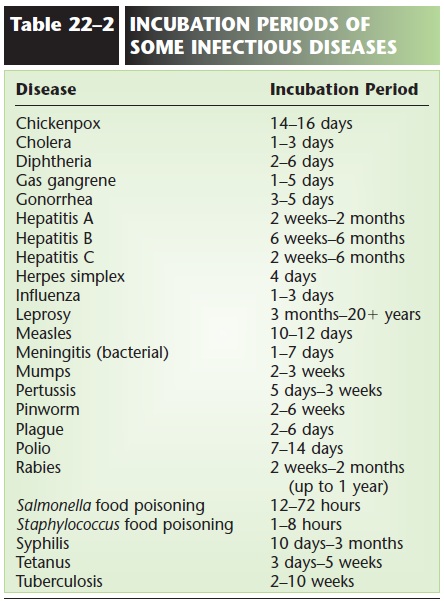 A short time called the prodromal period may follow the incubation period. During this time, vague, non-specific symptoms may begin. These include generalized muscle aches, lethargy, and fatigue, or a feeling that “I’m coming down with something.”

During the invasion period, the specific symptoms of the illness appear. These might include a high fever, rash, swollen lymph nodes, cough, diarrhea, or such things as the gradual paralysis of botulism. The acme is the worst stage of the disease, and this is followed by the recovery or death of the host.

Some diseases are self-limiting; that is, they typi-cally last a certain length of time and are usually fol-lowed by recovery. The common cold, chickenpox, and mumps are illnesses that are considered self-limiting.

The terminology of infection may refer to the location of the pathogens in the body, to the general nature of the disease, or to how or where the pathogen was acquired.

A localized infection is one that is confined to one area of the body. Examples are the common cold of the upper respiratory tract, boils of the skin, and sal-monella food poisoning that affects the intestines.

In a systemic infection, the pathogen is spread throughout the body by way of the lymph or blood. Typhoid fever, for example, begins as an intestinal infection, but the bacteria eventually spread to the liver, gallbladder, kidneys, and other organs. Bubonic plague is an infection that begins in lymph nodes, but again the bacteria are carried throughout the body, and fatal plague is the result of pneumonia.

Bacteremia and septicemia are terms that are often used interchangeably in clinical practice, although technically they have different meanings. Bacteremia means that bacteria are present in the blood; septicemia means that the bacteria present are multiplying rapidly. Septicemia is always serious, because it means that the immune defenses have been completely overwhelmed and are unable to stop the spread of the pathogen.

With respect to timing and duration, some infec-tions may be called acute or chronic. An acute infec-tion is one that usually begins abruptly and is severe. In contrast, a chronic infection often progresses slowly and may last for a long time.

A secondary infection is one that is made possible by a primary infection that has lowered the host’s resistance. Influenza in an elderly person, for example, may be followed by bacterial pneumonia. This sec-ondary bacterial infection might not have occurred had not the person first been ill with the flu.

Nosocomial infections are those that are acquired in hospitals or other institutions such as nursing homes. The hospital population includes newborns, the elderly, postoperative patients, people with serious chronic diseases, cancer patients receiving chemother-apy, and others whose resistance to disease is lowered. Some hospital-acquired pathogens, such as Staphylo-coccus aureus, are transmitted from patient to patient by healthy hospital personnel. These staff members are reservoirs for S. aureus and carry it on their skin or in their upper respiratory tracts. For this reason, proper hand washing is of critical importance for all hospital staff.

Other nosocomial infections, however, are caused by the patient’s own normal flora that has been inad-vertently introduced into an abnormal body site. Such infections may be called endogenous, which literally means “generated from within.” Intestinal bacilli such as E. coli are also an important cause of nosocomial infections. Without very careful aseptic technique (and sometimes in spite of it), the patient’s own intes-tinal bacteria may contaminate urinary catheters, decubitus ulcers, surgical incisions, chest tubes, andintravenous lines. Such infections are a significant problem in hospitals, and all those involved in any aspect of patient care should be aware of this.