Infancy - Domains and Stages of Development

Infancy is very critical and shortest of all developmental periods.

Infancy is very critical and shortest of all developmental periods. Infancy is the sec-ond most rapid period of development and growth. Infancy begins with birth and ends when the infant in approximately two weeks old. This period is divided into two periods namely 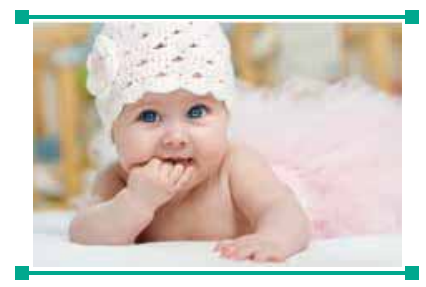 i. Period of the Partunate – from birth to fifteen to thirty minutes after birth. The infant continues to be a parasite until the umbilical cord has been cut and tied.

ii. Period of the Neonate – from cut-ting and tying of the umbilical cord to approximately the end of the second week of postnatal life. During this period, the infant must make adjustments to the new environment. 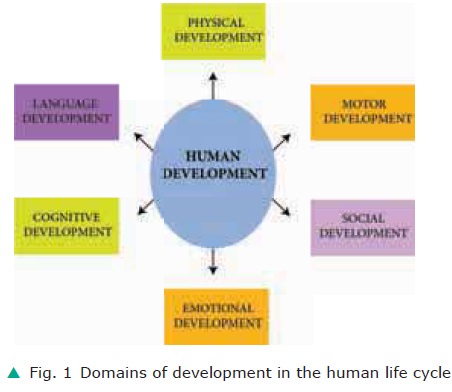 Collect photos/ Pictures of each stage of the life span and paste them on a chart. Ob-serve and record pattern of development.

Infants differ greatly in appearance and physiological functions at birth and in their early adjustments after birth.

At birth, the average infant weighs 3 to 3.5 kg and measures 50 cms (20 inches) in length. Weight in relation to height is less at birth. The muscles of the new-born are soft, small and uncontrolled.

Babies have a large head and promi-nent forehead, chubby cheeks and the chin is much too small. The nose is small and flat. The neck is short and almost invisible.

The shoulders are narrow, while the abdomen is large and bulging. Hands and feet are miniature. With the birth cry, the lungs are inflated and respiration begins. Neonatal heart beat is more rapid. Elimination of waste products begins in a few hours after birth. The relative proportion is shown in figure 2.

The first activities of human infant are random, imperfect and uncoordinated. The most common of these include visual fixation of light, spontaneous eye movement, sucking, swallowing, lifting the head, hand movements, leg and foot movements and body jerks.

c. Sensory Abilities of the infant

At birth, the retina has not reached its full development. There is no coordination between both eyes. At about thirty hours, the papillary reflexes are well established. They can detect movement as early as two or three days after birth. At seventh or ninth day of life, they respond to different colours. 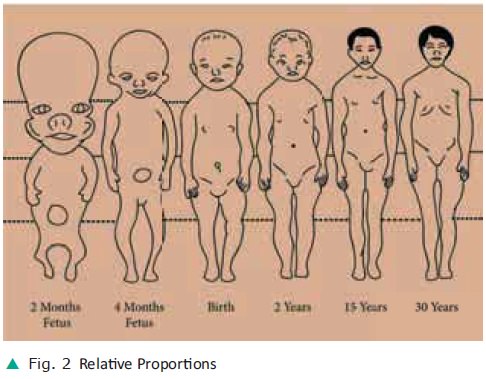 At birth, hearing is lowest because the middle ear has amniotic fluid.

During the first week of life infants react differently to dif-ferent tastes.

Infants are able to sense the odours that adults can sense.

The skin sensations of touch, pressure, temperature and pain are present at birth. 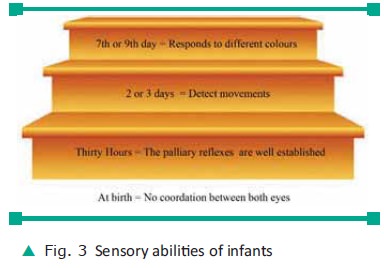 Every new born infant’s adjustment to postnatal life is difficult at first. They must make 4 major adjustments before they can resume their developmental progress.

During prenatal stage, the fetus is supplied oxygen through the umbil-ical cord. When the umbilical cord is cut after birth the infants must begin to breathe on their own. The infants take their first breath imme-diately after birth as they cry since their lungs are filled with oxygen.

Before birth, the infants are in temperature of 98o–100oF in the uterine sac, while temperature in the hospital or home may vary from 60 to 70°F. 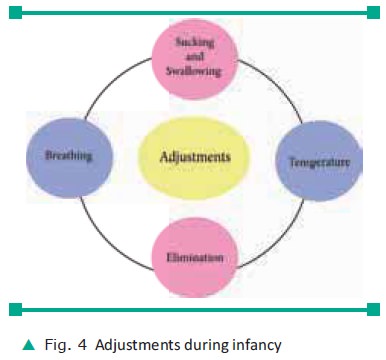 Newborns are usually kept warm by providing suitable warm clothing, warm bedroom or placed next to the mother’s warm body.

Infant must now get nourish-ment by sucking and swallowing, instead of receiving it through the umbilical cord. These reflexes are perfectly developed at birth and are increased along with development.

The infant’s organs of elimination begin to work soon after birth.For-merly, waste products were elimi-nated through the umbilical cord. After birth, defecation occurs at an average of 4 to 7 times and urina-tion at an average of 18 times.

Newborns interact with their environment entirely through reflexive behaviours. They follow their instincts and invol-untary reactions to get what they need: food, air, and attention. Babies begin to grow and learn about their environment through their senses. 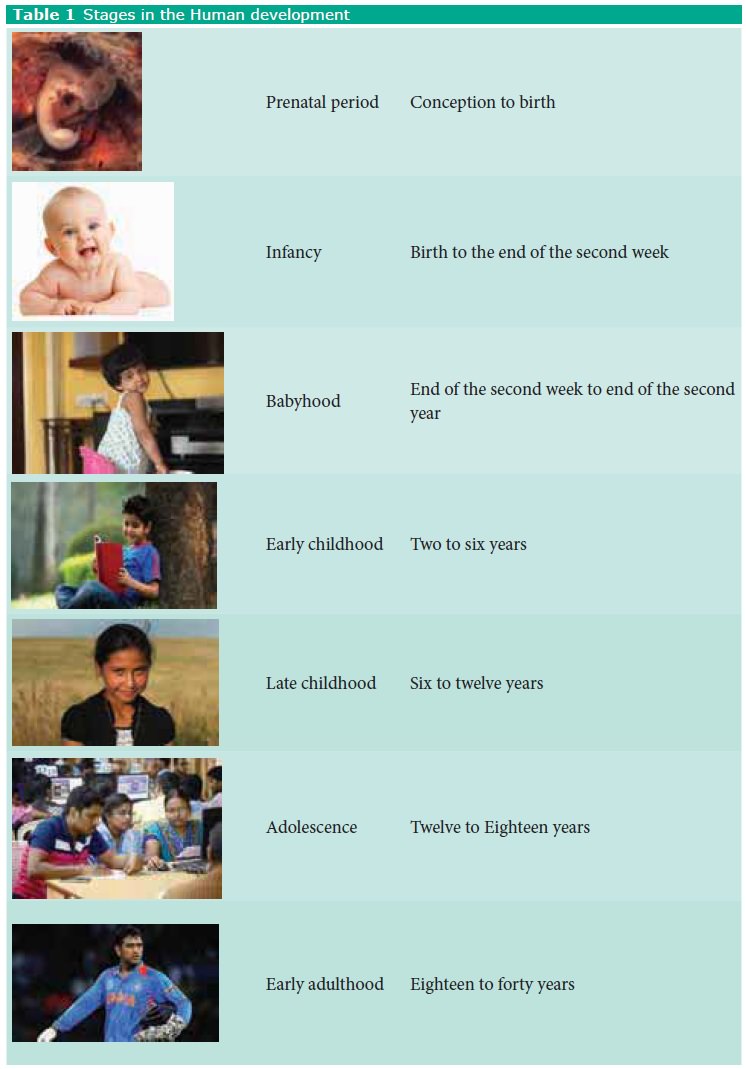