Adulthood - Domains and Stages of Development

Adulthood is usually divide into subdivisions or stages

Adulthood is usually divide into subdivisions or stages 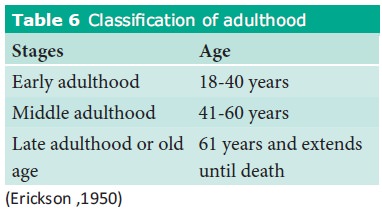 Expectations and developmental tasks during adulthood:

•      Achieving a measure of personal autonomy

•      Establishing and consolidating a career

•      Becoming a part of a social group or community

•      Selecting a mate and adjusting to marriage

•      Establishing residence and managing a home

•      Becoming a parent and rearing a child

Physical and Cognitive Changes during Adulthood

Physical Changes It has been found that the organ system of most per-sons show a 0.8 to 1 percent decline per year in functional ability after the age of 30. Major physical changes with ageing are described as (1) external changes (2) internal changes, and (3) changes in sen-sory capacities.

External changes refer to the outward symp-toms of growing old. The more observable changes are those associated with the skin, hair, teeth, and general posture.

·        Skin also becomes thick, hard, less elas-tic, brittle and dry and wrinkled. With advancing age, the hair of the person continues to turn white and loses its luster and continues to thin.

·        Baldness and loss of teeth is common for many, dentures become a way of life.

·        Most weakening occurs in the back and leg muscles, less in the arm muscles.

·        There is a progressive decline in energy production. Muscle tissue decreases in size and strength.

Internal changes refer to the symptoms of growing old that are not visible or obvious.

With increasing age there is decreased capacity for biting and chewing, decrease in the production of digestive enzymes, decreased gastric and intestinal mobility and lack of appetite.

With the aging process, there is a decrease in the elasticity of blood vessels and blood cell production as well.

The Central Nervous System (CNS): Beginning at about age 60, there is a reduction of cerebral blood flow. There is also a decline in oxygen and glucose con-sumption. The most definite change is the slowing down of responses.

With advancing age, there is gradual slow down in the sensory abilities.

Cognitive Changes during Adulthood and Aging

The four major aspects of cognition includes memory, learning, attention and intelligence. Old persons are found to perform poorer than young ones on long-term memory tasks which require pro-cessing of information and organization of material. They are not in a position to learn skills. Attention span is also found to be lower than younger individuals. Intelligence tests indicate that old persons are slower on reaction time. Among the elderly, we often can find reduced abilities for complex decision making and slowing of performance.